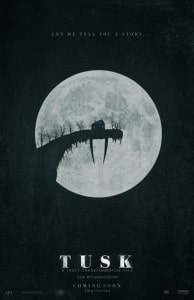 Often times a writer/director can surprise you by making something they are not known for. It can be refreshing, or cringe inducing, to see artists broaden their horizons. Roland Joffe directed Captivity. Barry Levinson directed The Bay. The Coen brothers had True Grit. Renny Harlin made Die Hard 2.

Kevin Smith wrote and directed Red State. Smith’s first foray into the horror genre wasn’t necessarily a horror film per se but was a pretty effective thriller in its own right. Smith’s latest film, Tusk, can definitely be categorized as a horror film. It’s not a horror movie of the “jump-scare” variety but of the sometimes-disturbing, often-gruesome and at-times-funny ilk.

Podcaster Wallace Bryton heads north to Manitoba to follow up on a story he recently discussed on the show with fellow podcaster and best friend Teddy Craft. When Wallace arrives there, however, things don’t pan out as planned. Wallace uncovers another lead story that seems too good to pass up, one that should make the seemingly wasted trip worthwhile. Wallace heads deeper into the Canadian wilderness to meet Howard Howe, a mysterious seafarer who claims to have some wild stories to share and, unbeknownst to Wallace, a dark, sinister secret as well.

Tusk is the sort of film that’ll have you laughing and cringing at the same time. There are numerous scenes that are so outrageous you can’t help but laugh, but as you think of the implications, it becomes rather unsettling. The film is more of a horror-comedy than a pure horror film, but it doesn’t really begin to dip its tail into the comedy pool until the second half of the film, which, despite being entertaining, is the film’s weakest element. In the second half, Teddy, along with Wallace’s girlfriend, Ally, go looking for him. To help track him down, they enlist the help of an ex-cop, Guy Lapointe, an eccentric character who almost seems to belong in a different film altogether.

The standout performance of the film is given by Michael Parks. Parks was great in Smith’s previous film Red State and takes crazy to another level here. The man is so out there it’s both funny and scary at the same time. Justin Long does commendable work as Wallace, especially considering he spends half the film in make-up and must do most of his acting through his eyes. When the film focuses on these two it’s at its best.

Genesis Rodriquez and Haley Joel Osment co-star as Ally and Teddy, respectively. They are good but really don’t leave much of impression, which is primarily due to their underwritten characters. Finally there is Guy Lapointe. The character seems to be played more for laughs and less as an integral character to the story, which he is. It’s unclear whose decision it was to play the character as he appears in the film, and while it was humorous at times, it did detract from the main story.

The film was written and directed by Smith and was inspired by an article that was discussed during one of the shows on his popular podcast. Overall it’s a mixed bag that works more often than not. It certainly plays better than The Human Centipede, and unlike that film, Tusk doesn’t imply its horror but instead places it front and center and as big as a walrus. Smith’s fans should enjoy it; horror fans may find something to like; everyone else will probably wanna skip it.