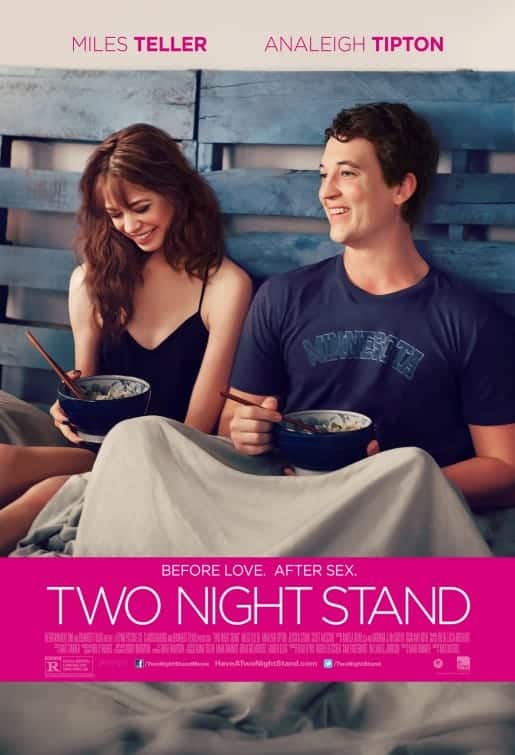 This pretty much sums up the basic structure of the countless romantic comedies that have been made since film’s early beginnings in the early 20th century. The challenges filmmakers face when tackling a rom-com is finding a way to entertain an audience familiar with the genre’s many tropes. And finding a fresh angle is certainly a daunting task when rom-coms are a dime a dozen.

However, even if the angle isn’t all that original, presenting the story in an entertaining way with engaging and relatable characters can help things go down much more smoothly. Max Nichols’ directorial debut, Two Night Stand, certainly strives to accomplish just that and, for the most part, succeeded.

Megan is convinced by her roommate, Faiza, that it’s time for her to come out from under her shroud of solitude and to get out into the world. Faiza tells her that what she really needs is a booty call, a one-night stand. After a planned hookup falls through, Megan once again finds herself all alone at home. Not to be deterred, she uses an online dating site to set up a one-night stand. There, she meets Alec, a seemingly nice and charming fellow. They agree to meet at his place and have their one-night-only tryst.

However, the following morning, while attempting to make a hoped-for quiet exit, things get a bit heated between them. While storming out of his apartment Megan discovers that an overnight blizzard has rendered the entire city snowed in and that there’s no way for her to get out, let alone get home; at least, not until the city can dig itself out of the snow. Having no other alternative, two strangers who thought they would never have to see each again are forced to spend more time together, which is the last thing they want to do.

That is the setup for this twenty-something rom-com written by Mark Hammer, who is also making his feature film debut. One will recognize story elements from countless other films, but it all comes done to how Hammer and director Nichols mix those familiar confections into a serviceable film. When we first meet Megan and Alec, they are strangers to us. As the two find ways to kill time, they, and we the audience, begin to learn more and more about these two individuals. Some amusing predicaments and humorous exchanges transpire, but like most rom-coms, it often suffers from an air of familiarity. Overall it works, but it does suffer in the last ten minutes when its ending, while cute, falls into sit-com territory, and is a bit hard to swallow.

What the film really has going for it are its two leads, Analeigh Tipton and Miles Teller. The two have nice chemistry and are at once likable and charming. Teller, outstanding in 2013’s The Spectacular Now, gives a solid comedic/dramatic performance as Alec. He’s funny, witty, charming and, despite all the bravado, he’s rather vulnerable. Not to be outdone, Tipton, previously seen in Warm Bodies, is very convincing as a confident-but-vulnerable, funny, sweet and fragile Megan. As the characters learn more about each other and the comfort level begins to rise, this pairing elevates the film as it progresses. The film also features Jessica Szohr as Faiza and Scott Mescudi (who some may know as musician Kid Cudi) as Faiza’s boyfriend, Cedric. The two of them also give some funny performances in the brief time they are onscreen.

Two Night Stand won’t shatter any molds in terms of romantic comedies, but as rom-coms go, it’s entertaining enough. The film features enjoyable lead performances and some amusing moments. Fans of the genre, as well as those of the lead actors, will likely enjoy it while others may find it a bit generic.