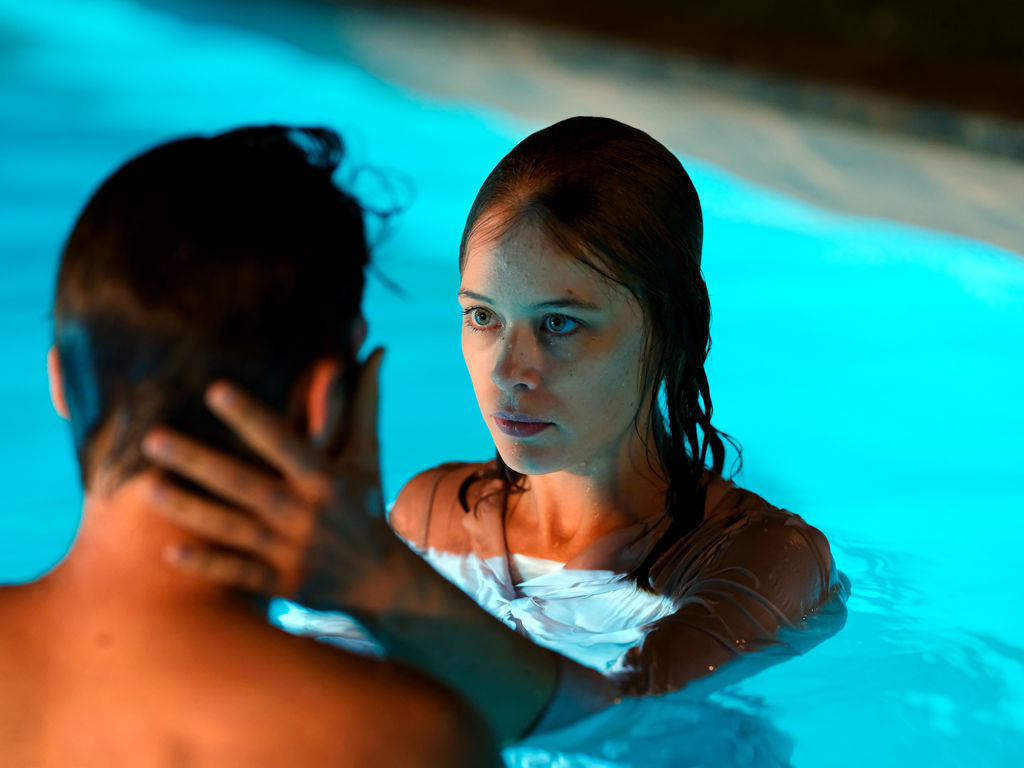 Distancing himself from the sumptuous period pieces that have brought him critical acclaim in recent years, writer-director Christian Petzold sets his latest film firmly in the contemporary urban sprawl of Berlin and puts a modern-day spin on a classic fairytale. Taking inspiration from the Friedrich de la Motte Fouqué tale of doomed romance between a water nymph and a noble knight, his interpretation, Undine, loosely borrows the structure from the traditional tale while never placing an emphasis on the more fantastical elements, thereby telling a more grounded romantic drama about a frayed relationship in his signature, understated style.

We are introduced to our water spirit stand-in, historian Undine Wibeau (Paula Beer, who previously starred in Petzold’s Transit), in the midst of a quietly awkward breakup with her boyfriend, Johannes (Jacob Matschenz). While given no knowledge of their relationship or why Johannes wishes to end it so suddenly, the emotionally fraught exchange — made all the more uncomfortable by Petzold’s punctuated editing and Beer’s subtle, yet devastating, performance — starts the film on a self-assured step.

Sitting in this powerful sequence gives us time to wonder if Petzold will ever make the fairytale origin of his script explicit outside of the character’s name and a recurring theme involving water that runs through the film. When Undine proclaims that, by betraying her, Johannes is sealing both of their fates  (referencing the double-tragedy conclusion of Motte Fouqué’s story), the film’s inspiration makes this moment play out more in a more sinister way for those not familiar with the story..

Undine is saved momentarily from acting on her threats (and presumably walking into the sea) after an exploding fish tank meet-cute brings industrial diver Christoph (fellow Transit lead Franz Rogowski) into her life and back from the brink of despair. A simple, devoted man who is enamored with her from the moment he attends one of her lectures on the urban development of Berlin, he and Undine harness the same smouldering chemistry they displayed in Transit to great effect as we get drawn further into their intensifying relationship.

Unburdened by the looming influence of the bleak romance that inspired it, Petzold allows their relationship to blossom gingerly with endearing scenes of the two’s growing infatuation. He takes her on an enchanting dive to a sunken ship bearing her namesake and ends up performing CPR on her to the tune of “Stayin’ Alive” much to her amusement.

She gives him a private lecture on Berlin’s development as he remains in reverence of her intelligence in the film’s surprisingly intimate scenes. It’s a blissful and charming romance told elegantly by Petzold through his graceful command of his scenes.

Obviously engrossing us in their amorous bliss serves only to make the moment where the fairytale interjects its signature tragedy into the story all the more effective, but the mood of the film never leans into this despair. The tone shifts abruptly when Johannes appears back into the film and causes strife between Christoph and Undine. Paranoid over the possibility that her wandering emotional attachment may have shattered her romance with Christoph irreparably, Undine finally embraces the Motte Fouqué story (which had begun to feel like a red herring until the third act) and descends into fanciful tragedy.

The film re-embracing its inspiration so late into its brief runtime is slightly off-putting. Up to this point, Petzold’s script rarely showed any commitment to framing Undine as such a character of her fairytale namesake capable of such romantic fatalism.

While her embracing of Christoph and vengeful despair over Johannes border on the obsessive and self-destructive, akin to fairytale-like tragedy, Beers’ moving performance firmly grounds the character as a flawed everywoman. Likewise, in allowing his film to rest in the enrapturing romance of its two leads and delicately sidestepping its folkloric origin, we never suspect that tragedy is looming, and Petzold’s sudden, third-act about-face, while effective and spectacularly realized, remains a hard pill to swallow.

Nevertheless, Undine is at its best when it can absorb you into the fairytale-like rhythms of Christoph and Undine’s romance, and luckily that takes up the majority of the film. Petzold’s stripped-down approach to his Motte Fouqué may be overly light on plot and feel like it is wrestling internally with how much it wants to take from its inspiration, but its interpretation shows heart in the way it transposes the story to modern times, mostly due to the marvelous chemistry that Beers and Rogowski deliver.