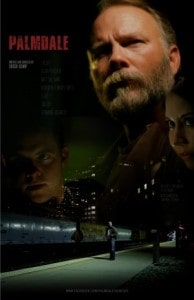 What does it take to change one’s circumstances? Must you make a personal change? Do you need to make a change in environment? Are you fated to take the path you’ve set for yourself or is there more to life than what lies before you? Does your past predetermine just where that path will lead? These are some very philosophical questions that many people have at one point or another have stopped to ask and pondered their answer.

They are certainly questions that films have tackled before. Some have been pretty straightforward while others were quite cryptic in their conclusions and raised even more questions than answers. These are the questions that can drive one’s soul. In the case of Kurt, the lead character of Erich Kemp’s feature directorial debut, Palmdale, simply turning a dark corner on the streets of L.A. will raise such questions.

Kurt has arrived in the City of Angels to do a job. It’s not just any kind of job like construction, night security or even hired muscle but a much more sinister calling. For the right price he’ll be your problem solver. He’s a hired killer. However when he arrives in town for his next job, circumstances don’t sit well with him. While walking the stark, blackened streets of the city, he encounters a young woman and arrives at a crossroads, where he finds himself contemplating his past, present and future.

Kurt is played by LACKOS (the actor’s stage name), who is quite effective as a killer with some sort of moral compass, as contradictory as that may seem. He does well when he’s brooding, being menacing or simply thinking things through. However, when Kurt’s softer side – if he truly has one – comes out, he seems a bit uncomfortable in emoting such sensitivity. Kristopher Knight-Doyle and Matthew Callahan play Adam and Michael, respectively, the pair who hires Kurt for his latest job. They do okay with what they are given, however a scene later in the film is rather underperformed. Tim Fox fairs better as Marty, Kurt’s target. At first unlikable, he proves to be rather engaging in what could be argued is the villain of the piece except for the fact that almost everyone in this film is a villain of some sort. Olivia Preciado portrays Marie, the young woman who quite unintentionally puts Kurt on a new path. Preciado is a bit uneven in her portrayal, most notably in a scene later in the film.

Written and directed by Erich Kemp, Palmdale is a serviceable and mostly engaging feature debut. While the tropes of the genre are evident, the story and Kurt’s journey are involving enough to make you want to see it reach its conclusion. Working with his cinematographer, Steven Burritt, he manages to capture some striking imagery of the barren, dark landscape of Los Angeles at night. Jonathon Fessenden provides an evocative score that does a decent job of setting the mood for locations and scenes. It could be argued that the film is rather slow, as it’s mostly made up of scenes of Kurt walking around in the dark, but the pace wasn’t much of a detriment, for this viewer at least. Palmdale is a decent character study of one man’s journey toward redemption. While all the pieces don’t exactly fit, it’s still cohesive enough to leave some sort of impression.