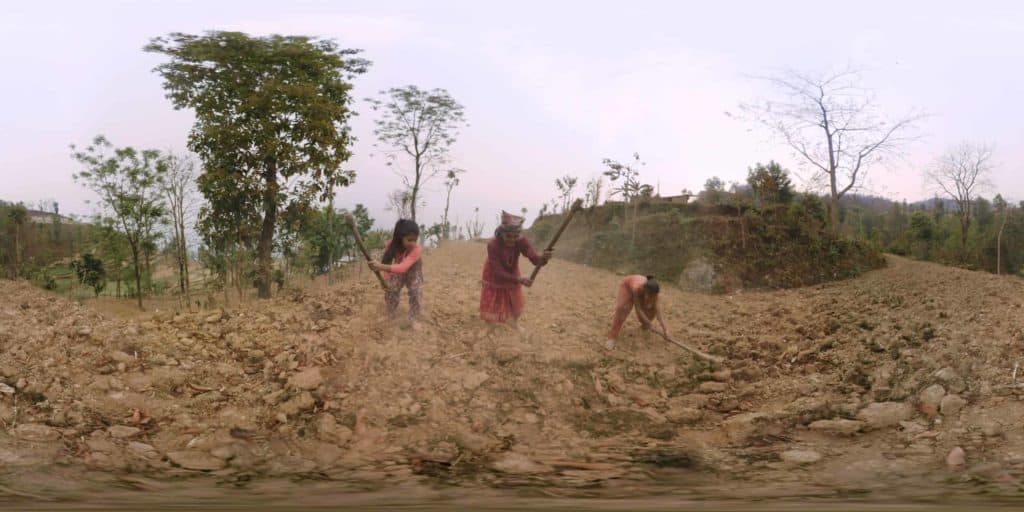 Released today via the UNVR App  on iOS, Android, and Oculus, is the virtual reality experience Ground Beneath Her, which gives you an immersive look into the devastation that befell Nepal after the deadly earthquake that struck in 2015.

As a strong supporter of VR, I believe this new medium is perfect for delivering emotionally resonant and socially important experiences like this one and I highly recommend checking it out if you have a headset. Take a look below for the full release.

LOS ANGELES (December 15, 2016) – When a deadly earthquake shook Nepal in April 2015, nearly 9,000 people lost their lives. For the millions left behind and left vulnerable by the quake, life would never be the same. More than 3 million people were displaced by the earthquake, many of whom live in makeshift homes or camp-like shelters. They wrestle daily with a lack of food, clean water and electricity, and yet life goes on many months later.

Ground Beneath Her is a virtual reality film that showcases the struggle of 14-year-old Sabita. More than a year after the earthquake, Sabita must balance the pain of picking up the pieces after the devastation and fulfilling the everyday duties of a fractured home, all while trying to keep her dreams for her future alive.

The film – which will be released exclusively on the UNVR app on December 15th – is a window into the hardships that hundreds of thousands of people in the country still face, whose homes were damaged or destroyed in an instant, and whose lives were changed forever.

A collaboration between the UN Development Programme (UNDP) and the SDG Action Campaign, the film’s award-winning director Gabo Arora breaks the storytelling mold by using minimal dialogue to great effect.

“The physical and emotional pain of a natural disaster can shake lives long after the world forgets the immediate damage and hardships,” said Arora. “In Ground Beneath Her, viewers gain a better understanding of scars that remain after events like the Nepal earthquake.”

While viewers are immersed in the bleak life of rural Nepal after the earthquake, they also see a human story of a young blacksmith’s daughter looking after herself and her siblings, all while pursuing her dream of becoming a doctor. Ground Beneath Her exists not only to immerse viewers in the starkness of life in rural Nepal after the earthquake, but also to give the displaced a voice and protagonism in how we conceive of the human toll of natural disasters.

Chiefly through sound and music, with a score by Emmy-nominated composer McKenzie Stubbert, Arora gives a glimpse into a hillside village, inviting viewers to interpret the film through a number of lenses. The film was co-created with Ari Palitz, and production studio HERE BE DRAGONS the world’s leading creative innovators in Virtual Reality and immersive experiences.

“Ground Beneath Her is our sixth experience for the United Nations VR initiative that tells a delicate yet urgent story about the human spirit and the world we all live in,” said Samantha Storr, vice president and executive producer at HERE BE DRAGONS. “While VR technology has advanced and our understanding of storytelling within this new medium has evolved, it is still the bravery and resiliency of the human spirit that makes these films come alive with a timeless feel. Beginning with our time in Jordan for Clouds of Sidra – and now, with Ground Beneath Her – we have been honored to witness such beauty, grace and bravery against odds and situations many of us could not imagine.”

The film is available on IOS, Android, Gear VR, and the Oculus Store beginning December 15th, 2016.

For more information and to download the UNVR app to watch “Ground Beneath Her,” please go to www.unvr.org

For still or moving images, or to schedule a press screening please contact Jessie Cohen: jessie@jessieiscohen.com

Statistics about the April 25, 2015 earthquake in Nepal