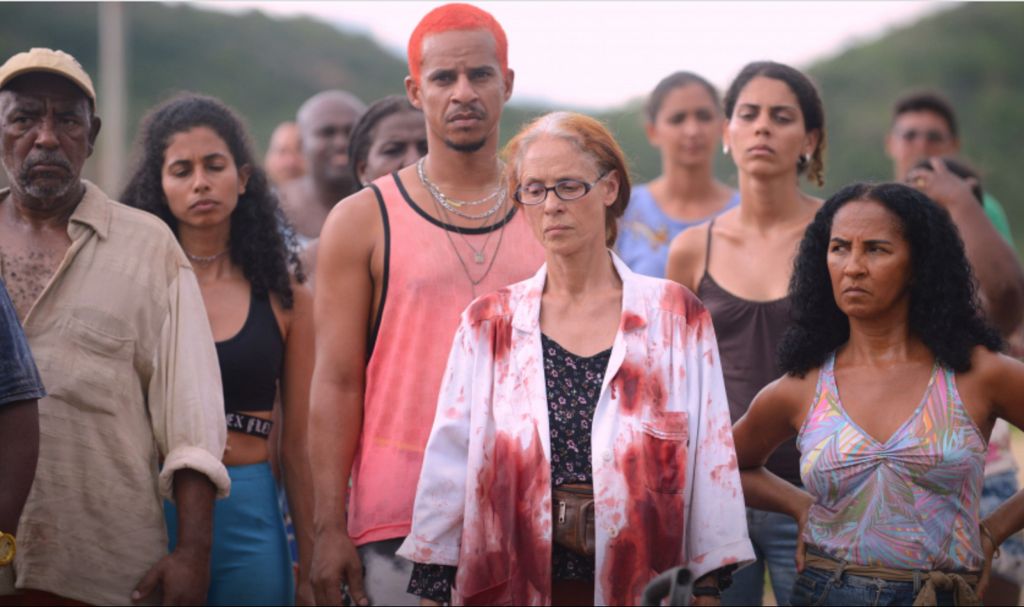 With local theaters taking a huge hit because of COVID-19, distributor Kino Lorber has announced a new virtual theatrical experience that allows fans to still support their local cinema while enjoying movies from home. The first title that will be taking advantage of this is Kleber Mendonça Filho and Juliano Dornelles‘ incredible satirical thriller Bacurau.

Though you’ll be buying a ticket and watching the film on demand, by choosing your theater you’ll be helping to keep them funded through this difficult time. Take a look below at the full release with provided links to each of the supporting pages for theaters participating.

New York, NY – March 19, 2020 — Kino Lorber announces today that it is launching a virtual theatrical exhibition initiative called Kino Marquee to enable movie theaters shuttered by the coronavirus outbreak to continue to serve their audiences and generate revenue in this difficult time. The initiative also lets movie audiences support their local theaters with their dollars and view the films digitally.

The first Kino Marquee screenings are with New York’s Film at Lincoln Center, Brooklyn Academy of Music and Jacob Burns Film Center. All will open with Kino Lorber title Bacurau, which would otherwise now be on screen in each venue. Directed by Kleber Mendonça Filho and Juliano Dornelles and starring Sônia Braga and Udo Kier, the film won the Jury Prize at Cannes in 2019 and went on to play Toronto and New York Film Festivals to much acclaim. It was a “New York Times “Critics Pick” by Manohla Dargis who called it “an exhilarating fusion of high and low,” and The New Yorker lauded the film as “ boldly inventive political fantasy.” The film has also been compared to Oscar-winning Parasite for its provocative themes of class disparity, with director Bong Joon-ho championing it at a recent screening.

Under the Kino Marquee program, the Company plans to initiate virtual releases with participating theaters for other currently scheduled and upcoming Kino Lorber and Zeitgeist first run and repertory titles at least until theaters are able to reopen.

The program is rapidly expanding with invitations going to all sixty theaters across the country who had already committed to book Bacurau. The current list of theaters on board at the time of publication are:

Kino Marquee has been designed to emulate the moviegoing experience as much as possible. Films will be booked from Fridays to Thursdays and presented on dedicated web pages headed by each theater’s branded marquee. Virtual “holdovers” will be determined by performance, and revenue will be split between distributor and exhibitor.

FLC opened Bacurau on March 6 and posted excellent numbers until they elected to close on March 12 in an effort to mitigate the spread of COVID-19 and prioritize the health of their community, and which unfortunately included cancelling a Q&A with the directors, here from Brazil, scheduled for that evening. BAM opened Bacurau on March 13 only to show it one day before being forced to shut down, and Jacob Burns had to cancel their March 13 opening that morning. The virtual screening rooms for all theaters will become operational over the next few days, effectively extending the film’s theatrical run on home screens.

“When theaters started to close, we at Kino Lorber turned our thoughts to how we could collaborate with our independent theater partners across the country. We cannot release the kinds of films we do without their support,” said Wendy Lidell, SVP of Theatrical Distribution at Kino Lorber. “Of course we wanted to find a way to keep our current film release in front of audiences, but to do so in a way that would also benefit our exhibition partners. We want to help ensure that these theaters will be able to reopen their doors after this crisis passes. The Kino Marquee program offers an opportunity for theaters to generate revenue while their doors are closed.”

Although Kino Marquee is hosted on Kino Lorber’s recently launched Kino Now VOD platform (www.kinonow.com), visitors to the Kino Now website will not be able to navigate to theaters’ virtual screening rooms. Rather, each theater will promote its own film page via traditional means, including reviews, eblasts and social media posts. Virtual “ticket” buyers from the theater’s Kino Marquee site will receive a link that gives them admission to an online screening room.

The Kino Marquee initiative will be scaled up in the coming weeks in response to market demand. Kino Lorber CEO Richard Lorber commented: “As a company whose mantra has always been “experience cinema” we’re keen to help our exhibition partners maintain their visibility and value in launching the whole media career of the carefully curated films we all care so much about. We’re all in this together and will come through it stronger with the support of the film loving communities our theaters serve.”