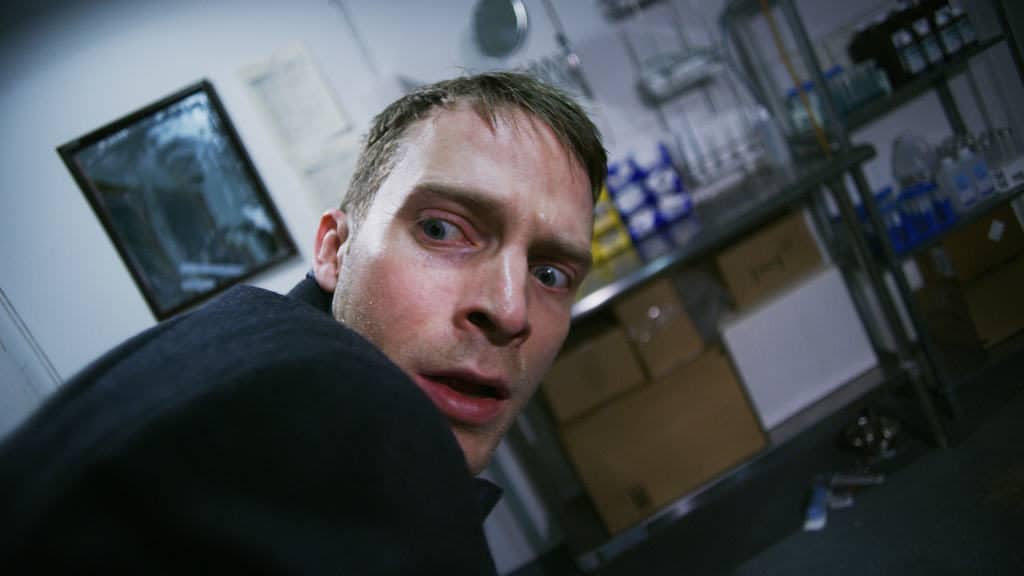 This is a repost of our review from What The Fest!? 2019. Depraved opens in theaters Friday.

In the best Frankenstein-like story since the unironically great Frankenhooker, Larry Fessenden’s first directorial effort since 2013’s Beneath marks his most ferociously entertaining feature to date. Eschewing the gothic locale of Mary Shelley’s classic for an urban loft in Brooklyn, Fessenden stitches together a tragic tale of loneliness and battered psyches.

David Call plays Henry, a wartime military medic whose time in the Middle East has given him PTSD, unable to forge lasting relationships and obsessed with rectifying the atrocities he was subjected to. The film opens, however, on Alex (Owen Campbell), a young man leaving his girlfriend’s apartment. He is attacked on his way home, leaving him bleeding out on the sidewalk, only to awaken with a new face, a stitched-up body and no memory of who he once was.

Where Fessenden’s story shines is the delicate relationship between Henry – who acts as the Dr. Frankenstein of this story – and Alex, who now goes by the name Adam. Watching Adam’s progress as Henry teaches him to be human again is fascinating and oddly heartwarming, even though we know this is a bond that’s doomed for failure.

Throughout the film, Fessenden overlays images of colored spots and synapses in the brain, mending themselves and creating new connections as Adam’s intellect begins returning to him. This is particularly prevalent in one of the film’s more visually stimulating scenes involving Adam visiting The Met and becoming overwhelmed with the beautiful art and history that surrounds him at the museum.

This sequence also happens to denote the first slight misstep in the narrative, with the introduction of Joshua Leonard as Polidori. Henry is a far more compelling character, and the act of pulling Adam away from him and placing him with this pharma bro makes for a far less intriguing sequence of events. Thankfully, Henry and Adam are brought back together, but their kinship is irreparably damaged as a result of his little field trip.

Call’s portrayal of Henry is a highlight, with the character vacillating between a sympathetic creator and a troubled, self-indulgent mad scientist, whose true motivations for pursuing the experiment never quite clear.

Depraved marks one of Fessenden’s best films to date, showcasing the director’s ability to craft a memorable, stylish and creatively astute narrative on a small budget. His status as a darling of horror and New York indie cinema has only be reinforced with this feature.