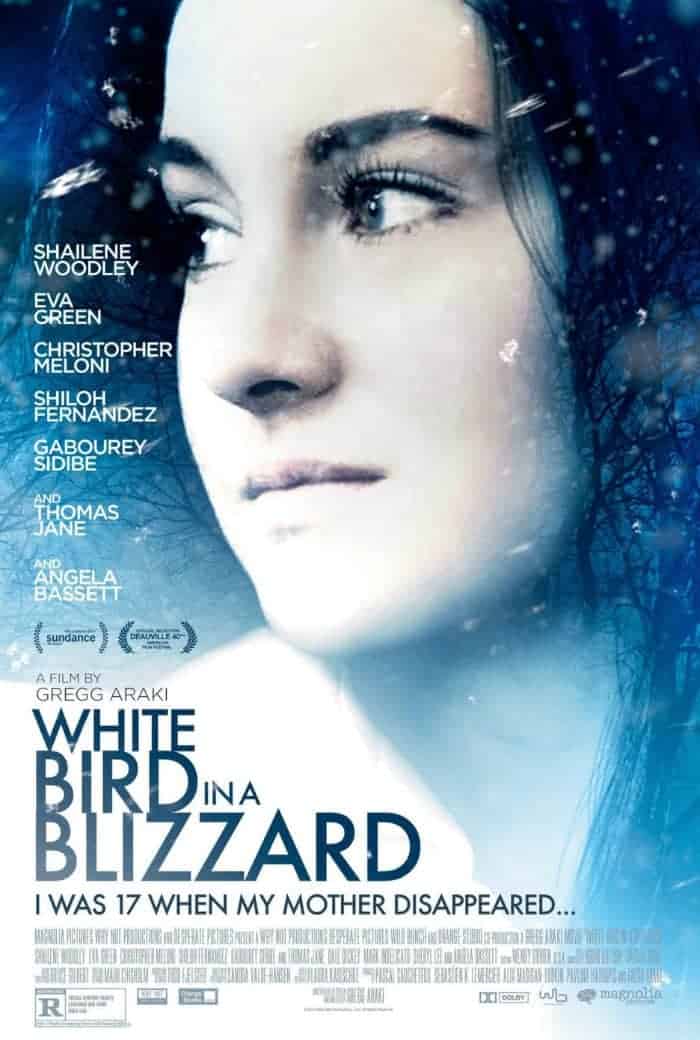 White Bird in a Blizzard is a difficult film to place in a particular genre. It should be a mystery, but it plays out more like a coming-of-age movie about a teenager coming to terms with her parents. That teen, Kat, is played by Shailene Woodley (Divergent, Fault in Our Stars). Some pundits thought Woodley might be nominated for an Academy Award for her work in the George Clooney vehicle, The Descendants, where she performed much better than she does here, swinging from wooden acting to overacting opposite an eclectic cast that includes Christopher Meloni, Eva Green and Gabourey Sidibe. White Bird never comes together, remaining an incoherent mash-up of various themes, none of which are terribly interesting on their own or when stitched together in a less-than-mediocre script.

As the film opens, we learn that Kat’s mother, Eve (Green), has disappeared without a trace. Kat’s father, Brock (Meloni), seems far more concerned about it than Kat. Her apathy is perhaps unsurprising given the strained relationship between Kat and her mother, revealed to us in the film’s flashbacks. The relationship between Brock and Eve is no bed of roses either (to Kat, her mother is an ice-queen and her father a “doormat”). Still, the lack of time and energy Brock, Kat and the police seem to spend looking for Eve is troubling. In any other film, the search for the main character’s mother would dominate the film; here, what dominates it is how Kat and her father act in Eve’s absence. It is a novel approach taken by writer-director Gregg Araki but it is ultimately an unsatisfactory one.

The film follows Kat in her last years of high school and through her first year of college. We watch her interact with her high-school boyfriend, Phil (Shiloh Fernandez), as well as with her two best friends, played by Sidibe and Mark Indelicato. Kat loves to talk with her friends about sex; her carnal desires seem to be forever in need of satisfying. First, she talks of her need to have sex with Phil, but that is replaced after she meets the police officer in charge of finding her mother (Thomas Jane). She calls him because she has information about her mother, meets him at his place and informs him that she believed her mother was having an affair. He seems mildly interested in this news; he is more interested in Kat and openly asks if she is there to seduce him. Of course she is, and so regular sexual meetings between the two begin.

I can say no more about the events that transpire without giving away key plot points. The film eventually reveals what happened to Eve and, while it did not surprise me, the specifics at the heart of what happened did catch me off guard. I suppose some will say that the film has a twist ending, and I suppose it does. However, I would rather say the film has a nonsensical ending. In my book, “twist” endings happen in films that earn them. I believe anyone who sees the film will understand what I mean. This is a film with many problems, from non-existent modulation among the actors’ performances to a pretty terrible script with its inability to deliver realistic situations and dialogue.

Finally, comparisons have been made between Woodley and Jennifer Lawrence because they both came to our attention in critically-acclaimed movies – The Descendants and Winter’s Bone, respectively – and because they are stars of multi-film adaptations of best-selling adventure novels (e.g., Divergent and The Hunger Games, respectively). There is where the comparison should end though. One need only look at the other films the two have made to see the difference between them; White Bird is no American Hustle.