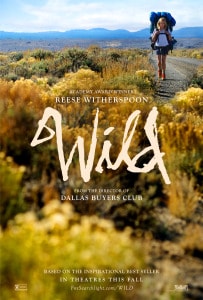 Some films have narrative but no plot. Wild is such a film. It stars Reese Witherspoon as audiences have never seen her in an unflinching portrayal of a simultaneously strong and brittle woman teetering on the edge as she walks over 1,000 miles up the Pacific Crest Trail. Her physical journey begins in Southern California and takes her to Oregon, and it is a grueling trip. Her emotional journey is no less treacherous and we see it primarily through quick flashbacks meant to be memories that she is reliving as she struggles to make the seemingly impossible trek through the wilderness.

It is unclear what sparked Cheryl Strayed – the real woman portrayed by Witherspoon – to walk 1,000 miles alone. We see glimpses of past problems and traumas, and perhaps it is the sum of these parts that set her on her journey. We know her mother (played by a luminous Laura Dern) died quickly of spinal cancer at the age of 45. We know that Cheryl was married to a seemingly nice guy named Paul (Thomas Sadoski) on whom she repeatedly cheated – and not with long-term affairs but “hook-ups” with strangers. We know that she became heavily involved in doing heroin.

All of these things we see in the memories she experiences along the trail. It is as if the release of physical energy needed to walk so far over such terrain releases thoughts she most likely wishes she would not think but is too physically tired to block from her mind. As a cinematic tool, it works well. The flashbacks rarely last more than a minute, so we are never taken out of her on-the-trail situation. Also, the flashbacks as memories do not feel like self-indulgent tricks there just to tell Cheryl’s story.

The film is populated by characters other than Cheryl, which adds a nice touch. She meets mostly nice people along the way, people who are willing to help her out and give her good advice. It becomes clear that she was not really prepared for such a hike and not prepared in any sense of that word. It is by seeing Cheryl interact with others that we get an even better sense of who she is as a person.

Cheryl’s memories underline the fact that the most important relationships in her life have either ended – her mother’s death, for example – or have evolved into another state. She talks to her ex-husband, but it is unclear what their relationship is, as she is on the trail. We see her with her best friend, Aimee (Gaby Hoffman), in flashbacks, but the status of that relationship on the trail is limited to the care-packages Cheryl receives from Gaby. The most important relationship throughout the majority of the film is Cheryl’s relationship with herself, and that, as many a psychiatrist might say, is the most difficult relationship in one’s life. It is certainly hard to be alone with oneself, especially if you have a good deal of regret, as Cheryl seems to have.

When Cheryl and Paul divorce, Cheryl picks a new last name for herself, and that is Strayed. I wonder if it was intentionally designed as a statement: Cheryl strayed.

She strayed from the path on which her mother placed her by dropping out of school, by cheating on her husband, by doing drugs, etc. The one thing we do not see her do is stray from the Pacific Crest Trail, and in the end, she triumphs by reaching her destination in Oregon. A voiceover tells of how she will meet a man in that town, how they will marry and how they will have two children. Making a film based on a woman’s memoir about going on an extremely long hike is not an easy task, but director Jean-Marc Vallée (fresh off of Dallas Buyers Club), screenwriter Nick Hornby (of About a Boy fame) and star Reese Witherspoon have crafted a fine piece of cinematic poetry. They are all to be commended for their efforts.