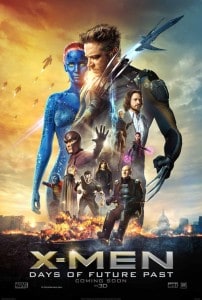 In a dystopian future, mankind, both humans and mutants, are on the verge of extinction.  A program that was initially created to quell the mutant threat of the 1970s has mutated into a deadly force bent on the eradication of all mutants and the domination of all humans.  Professor X and Magneto have determined that a moment in mutant history was the flashpoint that set these dark days in motion.  Together with the help of other mutants they send back one of their own to intervene and prevent this event from occurring and to hopefully alter the future.

Working from an adaptation of Chris Claremont and John Byrne’s highly regarded comic storyline by Jane Goldman, Simon Kinberg and Matthew Vaughn, Singer has crafted a thrilling entry in the franchise.  For this viewer, X2 was the best in the series and for the longest time was one of the films that other comic book films should be measured by.  All that made that one so great, the action, the heart, the story, the acting, is present in Days of Future Past and then some.    There is quite a lot to digest here and the thought of a film having to deal with the older and younger versions of the characters simultaneously seems daunting.  On paper this film is filled to the brim and overflowing.  Can anyone keep up?  Amazingly enough one can.  All credit must be given to the writers, Singer and editor John Ottman for making this time travel epic incredibly coherent, easily to follow and air tight.   Not just in terms of its story but how it involves the entire franchise as well.   Thanks to audience familiarity they can jump right into the thick of things without having to provide backstory for everyone.  It’s very well done.

Above all, and more so than any other film in the series, the acting in this one is top notch.  The stellar ensemble knows their characters and slip right into them without missing a beat.  In particular, James McAvoy, Hugh Jackman, Michael Fassbender and Jennifer Lawrence provide this film with its heart and soul while Patrick Stewart and Sir Ian McKellen give it its gravitas.  There are numerous new characters who appear in the X-Men universe.  Peter Dinklage appears as Dr. Bolivar Trask, the man who invented the Sentinels program.  He is quite affective as the human villain of the story.  Evan Peters steals the show as Quicksilver.  He has one of the coolest scenes in the film and the entire franchise.  Nearly everyone from the span of the series returns here in some capacity and the actors do what the need to do for the story.  They play their parts and as fans that’s the best we can ask for.

Bryan Singer infuses the franchise with a reinvigorated vitality.  Both casts look genuinely thrilled to return to this universe.  It certainly helps that they had a solid piece of fiction to work from and they did a solid job of adapting it for film.  This is like The Avengers for the X-Men franchise, it’s as though all the films were leading up to this and boy does it payoff in spades.  This is a solid comic book film that is thrilling, funny, dramatic, intense and will keep you on edge until its conclusion.   Not only will you be eager to watch it again you’ll be screaming with anticipation waiting for the next entry in the franchise…stay through all of the end credits to see why.   Days of Future Past is not to be missed.

One Response to “X-MEN: DAYS OF FUTURE PAST Review”