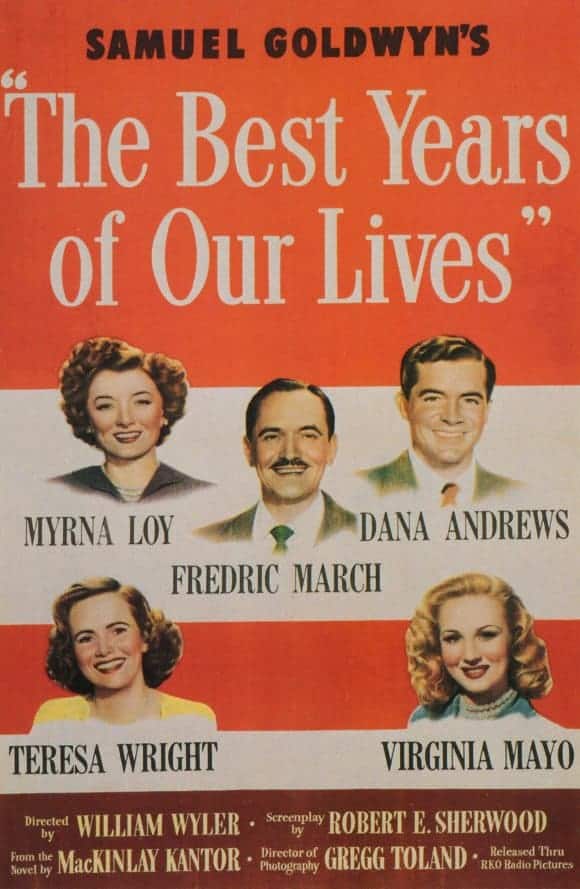 Wyler’s 1946 re-acclimation epic, The Best Years of Our Lives, skirts on the threshold of indelible American classic, unable to fully break through into the realm of cinematic masterpiece; so often, when talking about the quintessential gems of 1940s Hollywood, Wyler’s post-war drama tends to get lost in the sea of discussion usually reserved for films like Casablanca, Double Indemnity, Citizen Kane, It’s a Wonderful Life and more. Seemingly lost in the mix is the fact that The Best Years… garnered eight Oscar nominations (winning seven) and happened to be the highest-grossing film since Gone With The Wind and the only film in history to have an actor win two separate Oscars for the same role – non-actor Harold Russell.

For all of its nominations, all of its box-office success in the US and the UK, the film appears to be routinely forgotten when it comes to discussing not only Hollywood classics, but also wartime-centric films. The Best Years of Our Lives is a sincere examination of an often overlooked aspect of a serviceman’s deployment – the homecoming. Deployed back into their hometown, a society that has moved on, continued to progress and evolve while these men were trapped in the clutches of a time-warp that is war; now tasked with readjusting to civilian life after three-odd years spent dropping bombs or learning to use your newly-acquired hook prostheses, Wyler presents these three men facing their own distinctive difficulties with genuine sincerity and a refreshingly restrained use of melodrama.

The Best Years of Our Lives is steeped in authenticity stemming from Wyler’s own personal experiences as a major in the US Army Air Forces during WWII, flying combat missions and filming several documentaries over the course of three years. Adding to the film’s authenticity is the casting of Harold Russell, a non-professional actor yet real-life veteran that lost both of his hands as an Army instructor while handling a defective explosive, who’s given ample screen-time to showcase his mechanical hook proficiency, yet the film never stoops to exploitation of this handicap, rather granting Russell the opportunity to unwittingly exhibit his enduring perseverance; not a portrayal of perseverance but rather a genuine, real-life example, the type that can never fully be conveyed outside of simply existing within someone.

Adapted from MacKinlay Kantor‘s novella Glory for Me, screenwriter Robert E. Sherwood skillfully balances the three separate storylines of the returning servicemen; each character’s journey to normalcy is given ample screen-time, allowing each narrative thread to develop naturally while also weaving the three together through drunken nighttime revelry, disapproved love interests, and knocking out commies. 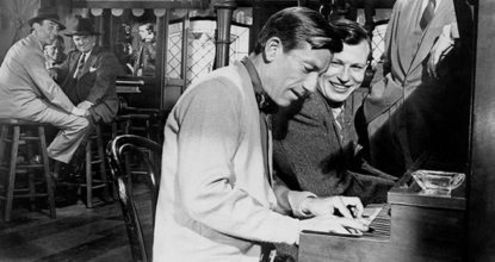 With a run-time of  172 minutes, the stories benefit greatly from the fact that each serviceman happens to be at a different point in his life, keeping their respective narratives continuously absorbing and fresh. The eldest of the bunch, Al Stephenson (Oscar winning performance from Fredric March), lives comfortably in a spacious home with his longtime wife, Milly (Myrna Loy), and his two children while working as a bank loan officer specializing in loans for returning veterans. Fred Derry (Dana Andrews) struggles to find work given his experience as a soda jerk and bombardier, while his new wife, Marie (Virginia Mayo) makes it quite clear that she’s not the least bit happy being married to a man with little to no money. (Poignantly, Derry is portrayed as a character with what we now call PTSD, though the designation was not known at the time.) This leaves the youngest of the group, Homer Parrish (Harold Russell), apprehensive and self-conscious from all the glances directed at his mechanical hooks, slowly withdrawing himself from his fiancee, Wilma (Cathy O’Donnell), for fear of becoming nothing more than a burden to the young woman. 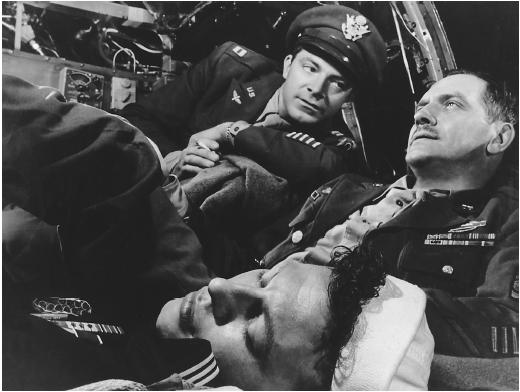 Everyone involved delivers a genuine, heartfelt performance, with thankfully only a smattering of melodrama, further adding to the film’s rich authenticity. However, the most heartbreaking and emotionally-connective performance comes from the non-professional of the ensemble, Harold Russell, who infuses every scene with unadulterated human emotion, flubbed lines and all. His crowning achievement comes towards the end of the film, in a nighttime sequence wherein he’s resolved to marry Wilma but considerately walks her through his bedtime routine. His boundless fortitude enables him capable of removing the harnesses, yet once removed the limitations of his perseverance are laid bare with the inherit helplessness of his handicap taking the spotlight. 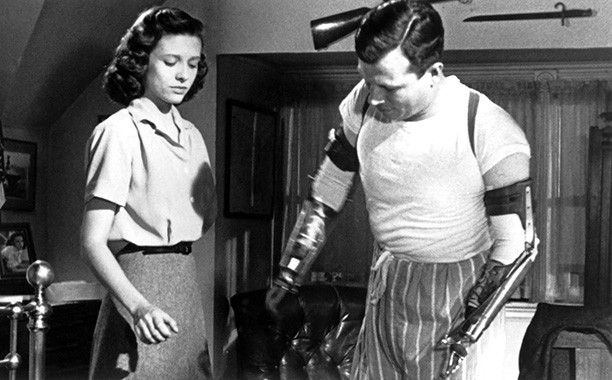 This beautiful, heart-wrenching sequence transcends acting, transcending cinema as if for that brief moment we are not watching a film from 1946 directed by William Wyler regarding veterans assimilating to civilian life, but instead watching a moment of pure emotional honesty from Harold Russell. The man, not the actor, and his struggles with his real-life disability as Wyler lets the camera roll, capturing the beauty of one man’s sincere overview of his vulnerabilities.