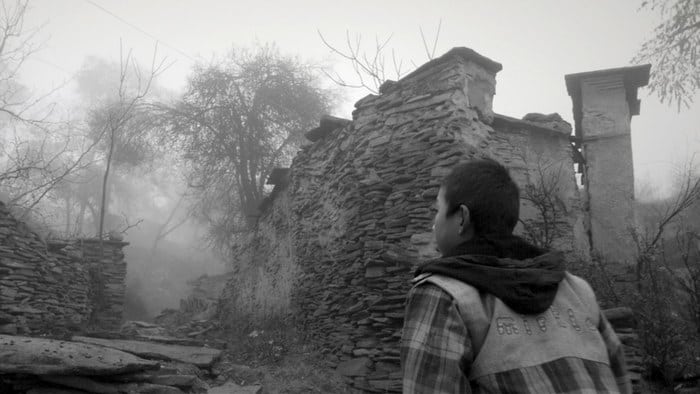 Hopefully, Miaoyan Zhang’s latest effort, Corner of Heaven, will avoid the same fate as his previous directorial efforts, Black Blood (2010) and Xiaolin Xiaoli (2007), both of which are incredibly difficult to track down. Although the film has just started its festival run, with stops in Busan and Vancouver, it seems to have gotten little attention thus far; hopefully that will change.

Corner of Heaven revolves around a young boy leaving behind his younger sister and their grandfather in search of their mother, who left days earlier. The camera follows the young boy along his seemingly destinationless journey, wandering through the broken villages along the Yellow River; a meditative excursion through a dreamlike ethereality of beauty and brutality, CORNER OF HEAVEN is a coming-of-age film like no other.

Comprised mostly of extended single takes, Corner of Heaven presents its coming-of-age tale completely devoid of any sentimentality or melodrama instead opting for a sleepwalking journey of sorts through a labyrinthine network of stacked-stone corridors and alleyways with hopelessness around every corner. Desolation permeates throughout the ashened landscape as the little boy shuffles his way from one misfortune to another as his odyssey takes him to a brick factory, kidnapped into slave labor, presumed death, drug addiction and a broken arm of his choosing.

Part travelogue city symphony, part visual exercise, part anthropological study with little to no dialogue Zhang’s film relies on showing not telling as the camera follows closely behind the boy on an invisible tether as he wanders from place to place; although, the boy and the camera seem to become one when interacting with the adult villagers. Zhang (also the film’s cinematographer) incorporates an exquisite mixture of long take handheld, robust static shots and a plethora of lyrical camera movements that appear to shift and stretch focus and depth; all of it captured spectacularly in black-and-white.

A monolith of melancholia, Zhang’s Corner of Heaven effortlessly captures the breathtaking beauty peeking out through the fog of sorrow in every frame, a parade of lifeless faces full of seemingly infinite strife and struggles living in an assemblage of structures on the precipice of unrelenting burden. The Parable of the Lost Sheep, as the opening sequence suggests, yet there will be no rejoicing as the lost sheep is never found. The only rewards awaiting the young boy upon his arrival home is another sheep lost and a wounded soul, patched up through perseverance as he readies himself for another arduous journey, in search of his flock, battered and bruised but not broken.