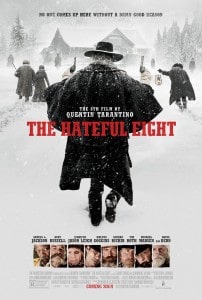 Who else but Quentin Tarantino could turn a three-hour-plus movie that takes place primarily in one location and consists largely of long conversations into an event film? But aside from any hullaballoo about film stock, overtures, and intermissions, The Hateful Eight is simply an impeccably written, shot, and performed Western/thriller/mystery that’s always engaging as a gaggle of colorful characters work their way through a labyrinthine plot that hinges on their individual interests.

Shooting in 70mm and retrofitting several theaters with projectors to exhibit the roadshow version of his Western, celluloid devotee Tarantino showcases the grand possibilities of the format in establishing the snowy post-Civil War Wyoming landscape in opening scenes (or “chapters,” which is how the writer/director often breaks up his films, though here it seems more apt than usual).  When the seemingly endless mountainous expanse is condensed into a single-room outpost, The Hateful Eight is still gorgeous, with close-ups revealing remarkable detail as the players in Tarantino’s high stakes game have their motivations exposed.

“The Hangman” John Ruth is delivering scofflaw Daisy Domergue (Jennifer Jason Leigh) to Red Rock for execution. A blizzard has made travel perilous and Ruth’s stagecoach stops to pick up fellow bounty hunter Major Marquis Warren (Samuel L. Jackson) and eventually Chris Mannix (Walton Goggins), a former Confederate and newly-elected sheriff. Arriving at Minnie’s Haberdashery to ride out the storm, the party encounters more stranded travelers: actual hangman Oswaldo Mobray (Tim Roth), Confederate General Smithers (Bruce Dern), Joe Gage (Michael Madsen), and Bob (Demian Bichir), who claims to be watching the place while Minnie’s away. Tension and paranoia run high as the eight (there’s actually a ninth with Ruth’s stagecoach driver played by James Parks, but I guess he isn’t filled with too much hate) try to establish control of the situation and figure out the others while filling in their own details.

It’s clear from the beginning that one or two or three or all of this lot has something to hide, and as they tell their stories they may or may not be telling the truth. Regardless of their potential treacheries that aren’t immediately clear, things are left slow enough to comprehend yet stimulating enough to encourage us to keep track of clues and follow the wordplay. Oftentimes it doesn’t really matter what’s true in the moment, and the flowery speeches are never boring. One story in particular, told by Major Warren right before the intermission of the roadshow version, served its purpose by coaxing a reaction from another character. When intermission is over, so is reference to that story as a new mystery is immediately introduced. The methods in which we’re guided from moment to moment are exceptional. 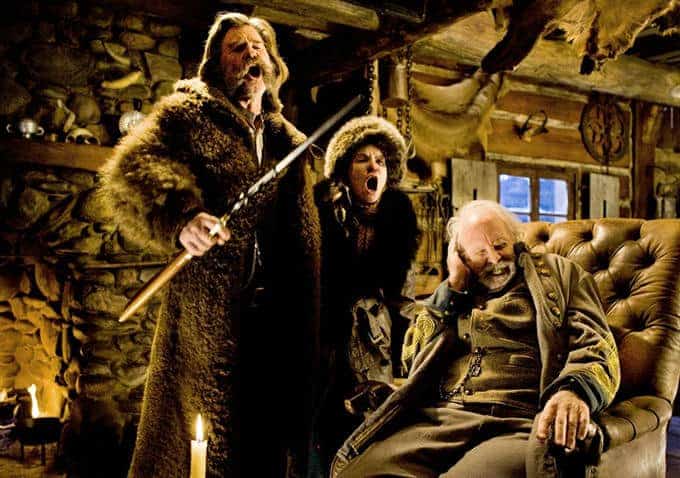 The confined physical space of Minnie’s Haberdashery (reminiscent of the warehouse in Reservoir Dogs, though better defined and more interesting to look at) is also used to great effect. As two or more characters converse in the foreground, we’re always aware that they aren’t alone. Whether at the bar, by the fire, at the dinner table, or pouring a cup of coffee, the pawns are always placed strategically. Many of the performers have worked with Tarantino before and are fluent in the filmmaker’s prose, establishing an ease with each other that flows with great rhythm. Everyone is fantastic though Jackson and Goggins are given the lion’s share of juicy lines and play them perfectly. The filmed stage play is thought-provoking with every word and every subtle action.

Of course, the action doesn’t stay subtle with a collection of hardened scamps packing pistols and insecurities. The buildup is rich with pressure and when it’s released, it comes bloody and furious in a violent final act that fills in the puzzle pieces while thinning the character herd. Also of note is the score from legendary composer Ennio Morricone that sounds like a signature Western opus with a sinister mystery twist, setting the tone from the opening moments.

All of the elements converge, anchored by another masterful screenplay from Tarantino, to create a vivid yarn that’s one of the best films of the year.