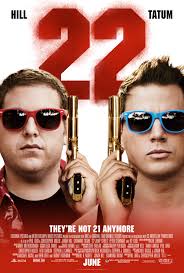 Filmmaking duo Lord and Miller make no pretenses when it comes to this sequel for a surprise box office success, a reboot no one necessarily cared about based on a late-eighties television series that’s mainly remembered for having Johnny Depp in the cast. And, for as ridiculous as all that sounds, Lord and Miller successfully, and surprisingly, capitalized on the first iteration of the new Jump Street and they seem to have done it again, all because of one fairly simple design, they know that all of this is ridiculous. They don’t hide it, they flat-out tell you again and again throughout the film with the addition of unnecessary-sequel tropes that are quickly subverted to great comical effect.

Instead of feeling like another unwarranted cash-grab sequel, the film unfolds more like fan service by popular demand. At no point do Lord and Miller try to pull the wool over your eyes, earnestly attempting to sell you the idea that 22 Jump Street is fresh, original and different from the first. In actuality, they tell the viewer numerous times throughout that it’s the SAME EXACT CASE; which, in turn, renders the film refreshing in its honesty. That honesty is most apparent in Nick Offerman’s frank rundown of the first film’s unexpected success that has lead to a bigger budget for the next as if more money automatically begets more profit.

This time around Schmidt and Jenko (Jonah Hill and Channing Tatum), now working out of the bigger, rundown church across the street from 21 Jump Street with its state-of-the-art office design alongside Vietnamese Jesus, are sent undercover to Metro City State to investigate a new drug called WHYPHY.

Sound familiar? That’s because it is…in a good way.

The film plays the greatest hits throughout with numerous jokes centered around Hill and Tatum’s ages, their lack of detective skills, Hill’s inability to parkour, Tatum’s inability to improvise, covalent bonds, Ice Cube anger issues, drug trips and more. Sprinkled in with the greatest hits are a number of worthy additions, the aforementioned sequel-trope subversions alongside growing budget concerns that are handled brilliantly and the development of Hill and Tatum’s once-budding, now-stagnant bromance that is routinely misinterpreted as something more.

Although 22 Jump Street may not be as hilarious as the first, and honestly who expected it to be, it is definitely a more-than-worthy successor in a line of films that seemed destined for failure from the word go. Yet, somehow, Lord and Miller along with the writing staff and, two, more-than-game leads in Hill and Tatum continue to defy the odds, recognizing the ridiculous nature of the project and embracing it full force.