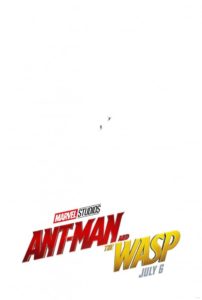 The third Marvel movie of 2018, and by far the least consequential, Ant-Man and the Wasp is a minor chapter in the MCU. It’s occasionally entertaining, thanks to two great leads, and boasts creative set pieces, but the smallness of the film extends way beyond the diminutive stature of its two central superheroes.

If recent history were a guide in this never-ending series, shrinking the stakes would be welcomed, allowing for deeper character exploration and the ability to tell an engaging story that feels more Avengers adjacent instead of reliant. Black Panther is one of the best films of the year so far; Thor: Ragnarok and Spider-Man: Homecoming are a lot of fun; and Guardians of the Galaxy Vol. 2 is bursting with that crew’s unique oddball charm. Ant-Man and the Wasp does not continue that Phase-Three tradition, combining its one-off innocuous adventure with the kind of unnecessary convolution that has bogged down the worst of Marvel’s output.

Set just before Avengers: Infinity War, the film opens with a ton of exposition and really never stops explaining things. Scott Lang/Ant-Man (Paul Rudd) is now estranged from his mentor Hank Pym (Michael Douglas) and Hank’s daughter, Hope (Evangeline Lilly), having been on house arrest since the events of Captain America: Civil War. Just a few days before his ankle bracelet is to be removed, and very conveniently timed for the screenplay, Scott begins having visions of Janet Van Dyne (Michelle Pfeiffer) – Hank’s wife and Hope’s mother – who’s been trapped in the Quantum Realm for a few decades.

Alerting his former colleagues of the dream, Scott is pulled back into the fold to help finish a project designed to retrieve Janet. Meanwhile, new adversary Ghost (Hannah John-Kamen) suddenly appears, looking to steal the tech and fix her own quantum mechanics issues, which bear a resemblance to the Ghost Twins from The Matrix Reloaded. 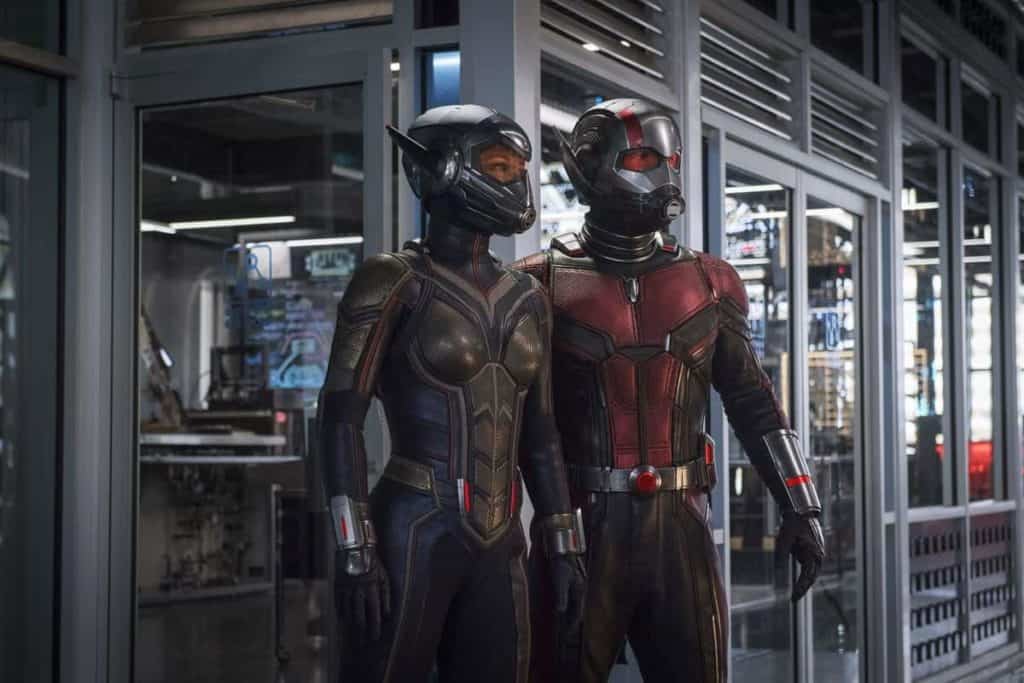 And if that weren’t enough, the clunky script includes several additional threads of various unimportance, including Scott co-parenting his daughter with ex Maggie (Judy Greer), launching a security business with friend Luis (Michael Pena, a very funny diversion), the involvement of Hank’s old colleague Bill (Laurence Fishburne), and the uninspired casting of Walton Goggins as a bizarre black-market tech dealer. Before all of that though, S.H.I.E.L.D agent Jimmy Woo (Randall Park), assigned to monitor Scott, provides a monologue that gets us up to speed on the events since Civil War.

The speech, along with Rudd’s charming quips about putting the word “quantum” in front of everything to poke fun at the film’s technical jargon, comes off as arrogance instead of winking in-joke. The entire film feels like Marvel coasting on fan service and familiar beats while simultaneously calling themselves out for it. None of it matters, and it makes for an odd, often condescending mix. 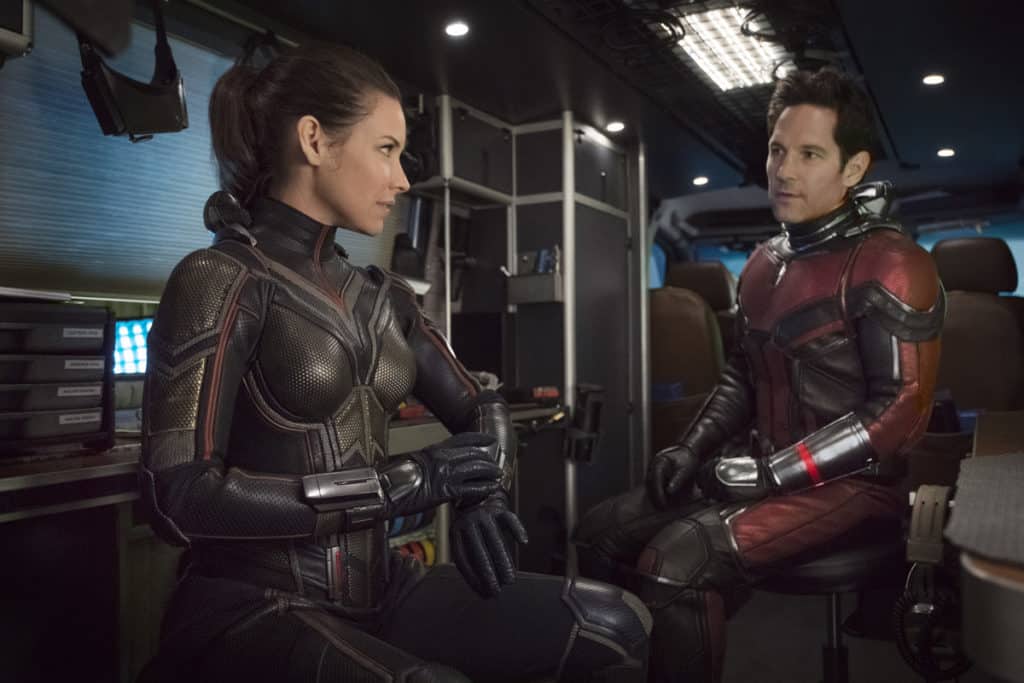 Plot-cramming leaves little time to develop the partnership between Scott and Hope, who’s donned a winged costume as the Wasp in his absence and is a far more capable hero of varying size. Rudd and Lilly are delightful alone and together, though there’s no synergy created in between the punchlines and fight scenes.

Strain in their relationship varies based on the necessity of any given scene. Scott makes one especially stupid mistake that endangers the entire mission, which Hope forgives after one of his well-timed witticisms. You remember, the mission is to be reunited with a mother she hasn’t seen in 30 years.

Building on the positive response to the comedy in 2015’s Ant-Man, the sequel goes to greater lengths to clown around, wasting a lot of time with running jokes while taking a flippant tone: a small bit about close-up magic kind of works; one about truth serum, a “World’s Greatest Grandma” trophy and many others do not. 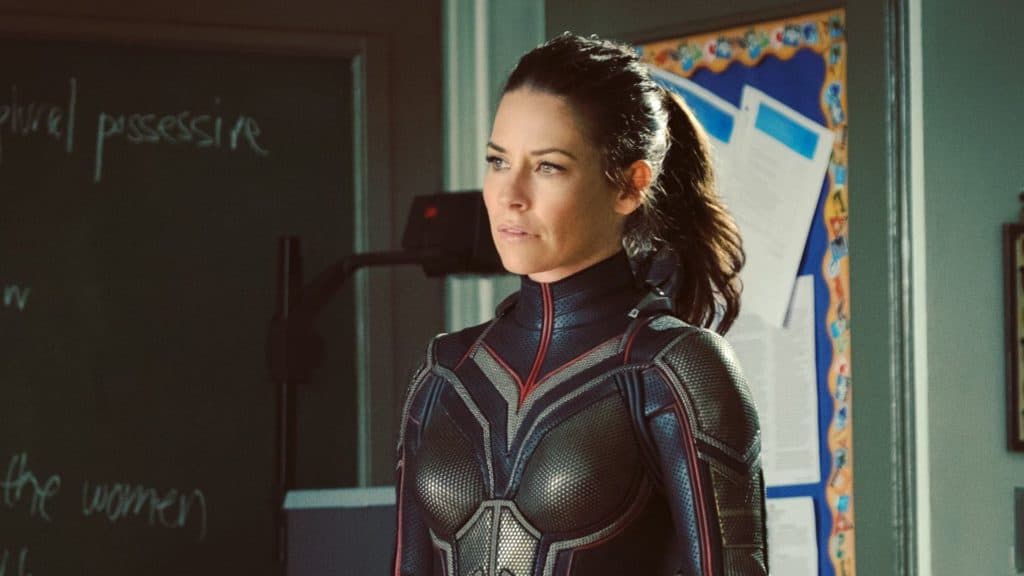 The real fun comes courtesy of the action, where playing with scale makes for some interesting visuals. Director Peyton Reed uses Pym’s fictional technology to choreograph conflicts atypical to the genre. That said, there are some glaring issues with compositing, one in particular with a small Hope and very large Scott, that stand out.

On a couple of occasions, Scott becomes stuck at a certain size that also looks off considering the jokes being made. Much better is the de-aging wizardry used on Douglas and Pfeiffer in flashbacks. They’ve come a long way since creepy-looking young Tony Stark in Civil War.

Pleasure generated from tiny heroes being endangered by meat tenderizers or seagulls or common objects used as growing/shrinking sight gags within the action are fleeting. The adventure is swallowed up by exhausting attempts at humor that don’t land nearly often enough. In terms of the Marvel films being episodic, Ant-Man and the Wasp is a forgettable mid-season replacement sitcom.