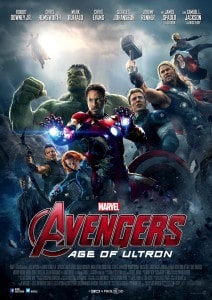 When we last left the assembled Avengers, the team had fought off a Chitauri invasion being orchestrated by megalomaniacal Loki. Substitute aliens with an army of humanoid robots being led by a megalomaniacal artificial intelligence and change the setting from New York to Eastern Europe, and you pretty much have the major conflict of Avengers: Age of Ultron.

The central skirmish is representative of the sameness that has permeated Marvel’s Cinematic Universe, where hype over timelines and anticipation of what’s to come has taken precedence over making the here and now engaging and exciting. In a series of interconnected films, each new chapter feels like a minor preamble to something greater – something that never quite materializes, and Age of Ultron more than any Marvel film to date is a bridge between past and future.

Middle-chapter syndrome notwithstanding, the movie isn’t a complete drag. There’s the introduction of an intriguing character or two, a scratching below the surface of former B-players, a few bits of thrilling, beautifully rendered action, and some signature Joss Whedon levity.

But the good elements either get repetitive or lost in murky plotting that relies on unrealistic devices to barrel from one development to the next. Even for a superhero movie it stretches the boundaries of acceptable impracticality.

The plot itself seems simple on the surface, but with so many players in the game convolution becomes an issue. Things start with a cool action sequence in a snow-covered forest where the team of heroes recovers Loki’s scepter from a Hydra base. Tony Stark/Iron Man (Robert Downey, Jr.) and Bruce Banner/Hulk (Mark Ruffalo) crack it open to find advanced artificial intelligence code locked inside, presumably only because A.I. is what’s needed for this particular plot. Stark wants to use the code to build a sentient robot force that will allow The Avengers to retire. Things don’t go as planned when the Ultron program springs to life and quickly comes to the conclusion that the only way to ensure human safety is to eliminate them all and take total control of the world.

James Spader is fantastic as the voice of Ultron. He’s able to chew some scenery despite never physically appearing on-screen and is clearly having some fun playing with Whedon’s snappy villainous dialogue. What’s not all that clear is his endgame. Ultron’s motivations seem nebulous and don’t always match his actions. He’s trying to gain access to nuke codes one moment, and focusing on his own evolution – which involves putting his consciousness into a synthesized human body, the next. When the various ideas on humanity and A.I. advancement are stretched as far as they can go, Ultron literally hits a button that renders everything moot in order to kick off an old-fashioned, CGI laden, extended third act fight sequence.

Hydra-created superhuman twins Scarlet Witch (Elizabeth Olsen) and Quicksilver (Aaron-Taylor Johnson) team up with Ultron out of hatred for Tony Stark, whose weapons were used to shell their village. One thing the script is succinct about is their description – “he’s fast and she’s weird.” Scarlet Witch is by far the most interesting addition, using telekinesis and hypnosis to dominate on the battlefield and inside the minds of her adversaries. Olsen is also able to give a sympathetic performance amid the chaos, portraying the pain of her past while also being believable in her own emotional evolution.

Another character provided with some welcomed depth is Hawkeye (Jeremey Renner), whose humanity provides something to latch onto. His great, though ordinary by comparison, skills with a bow and arrow are directly called out, and his domestic life grounds the extraordinary events surrounding him. What doesn’t work as well is the budding romance between Banner and Black Widow (Scarlett Johansson), which exists to give them something to do outside of the action set pieces.

Captain America (Chris Evans) and Thor (Chris Hemsworth) take somewhat lesser roles here, existing as fodder for humor – moments involving Thor’s hammer are the best of the film, or as physically dominant players who show up to get teammates and civilians out of jams. But hey, we’ll get plenty of them in Captain America: Civil War and Thor: Ragnarok (coming soon from Marvel!).

With so many characters to juggle – including cameos from several familiar faces and the introduction of mysterious newcomer The Vision (Paul Bettany) – and a complicated mythology to adhere to and advance, it’s a minor miracle that Whedon manages to keep Avengers: Age of Ultron even slightly coherent. Though we’re able to get through the entire 141 minute runtime without fully glazing over, things definitely get foggy. If you’ve seen one guy in a superhero suit punch someone/something in the face you’ve seen them all, and it gets harder and harder to just accept the ridiculousness and have fun. From Thor visiting a magical hot tub to get helpful plot information to quick personality transformations and multitudes of people/things swooping in to save the day at the last minute, the deux es machina strategy is too strong to ignore.

The cohesive strategy that made Marvel movies feel so fresh and exciting when this whole thing started several years ago is now making individual films more and more indistinguishable. Age of Ultron suggests much-needed shakeups are coming, but as has become standard, they’re promised for the next go-round.