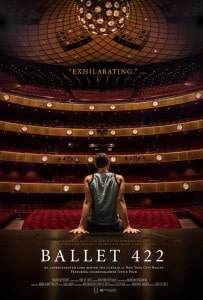 Before reading on, just know that you don’t have to be a fan of classical ballet to appreciate Jody Lee Lipes’ documentary Ballet 422, which premiered at last year’s Tribeca Film Festival and also played at the 2014 Seattle International Film Festival.

Yes, there’s the obligatory opening sequence that zooms closely in on the dancers’ – ahem – well worn feet and quite a bit of ballet jargon that quite honestly went over my head, but for the most part, this 75-minute documentary offers a unique glimpse into the lives of the professionals behind the curtain of The New York City Ballet.

Centering on Justin Peck, a 25-year-old member of the NYCB and recipient of the first-ever choreographic residency offered by the New York Choreographic Institute, the film takes a behind-the-scenes look at what it takes to put on an original piece of work – in this case, “Paz de la Jolla,” Peck’s third ballet for the NYCB, which premiered here in New York a little over two years ago.

With soulful eyes and the temperament of someone twice his age, Peck’s vocal rhythms are very much that of a Millennial, but there’s no doubt he is a skilled and experienced master of his craft. Though he’s a more captivating dancer and choreographer than he is a documentary subject, Peck is an intriguing individual, and it would have been nice to know more about his background, what inspired him to want to dance and then to design his own classical pieces, and – most of all – what it feels like to have the responsibility of a production like this on his shoulders.

Arguably the greatest masters of making hard things look easy are the dancers themselves, who go from being mere flat-footed mortals joking around between rehearsals, to baffling beasts of body movement when the music begins. Though seemingly loose and willowy on stage, these powerful athletes are deceptively strong and steady, meticulous in their movements, all with years of intense training under their belts.

Yet Jody Lee Lipes’ decision to frequently frame the “non-action” or the observers of the action in his shots, especially early on in the film, tells another story about the ballet – one of waiting, learning, teaching, collaborating and, frankly, one of making mistakes. He flips the script on the traditional expectations for a dance movie by eliminating the flawless dance sequences and, quite literally, ending the shot just as the “real” performance begins.

Ballet enthusiasts may not find this film as educational as I did, but they may very well be able to appreciate the nuances of the art form or understand the more technical elements of the production that I did not. For those who tend to shy away from “dance movies” but enjoy documentaries, I’d recommend checking this one out if it’s playing near you.