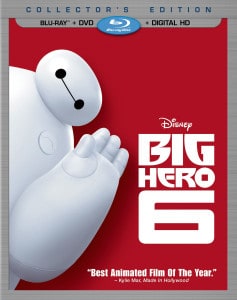 The story of Hiro Hamada, his marshmallow-fluff friend and their crew of crime fighters was released last year to high praise and was lauded as an original story that was both comedic and heartwarming. Snagging an Oscar this week for best animated feature, Big Hero 6 – a film adaptation of the Marvel Comics series – brought to life the origin stories of these two-dimensional characters from the books and laid down a decent foundation for the anticipated set of sequels.

Although both the feature and the short are undoubtedly precious animated films, Disney’s packaging of them and the accompanying special features was lacking in comparison to its typical combo packs. There was a neat origin-story featurette that showed us a little about how the squishy robot Baymax and the gang came to be, but the remaining features were fairly sparse and forgettable.

It was neat to see how directors Don Hall and Chris Williams and their animators blended the feel of San Francisco and Tokyo to create the fictionalized world of San Fransokyo and to learn that they consulted with actual scientists to create a story that was as grounded in actual science as much as they could make it, including working with robotics experts from Carnegie Mellon. There’s also a little background on Baymax’s adorable fist-bump gag and how the Big Hero story changed over time, alternating protagonists in certain scenes and reworking the opening sequence.

Among the alternate versions of the plot was one particular storyline that proposed the concept of having multiple villains for the superheroes to face off against, which actually seemed like a great idea visually and is perhaps one that will be explored in sequels. This is shown in the form of animatics with limited sound treatment, along with a few other storyboard sequences that didn’t make the final cut, but I wouldn’t go so far as to call these “deleted scenes” that ended up cutting room floor; they are concept drawings that, due to the costliness of computer-generated animation, remain hand-drawn scribbles.

Disney could have given us much more to chew on, such as international trailers, one-on-one interviews with the creators, additional commentary from the directors and voice actors, or plenty of (what would likely have been) interesting and unusual bonus content. Yet, a moderately interesting group discussion with the animators and a few deleted storyboards felt superficial and somewhat tacked on in order to pad the box set.