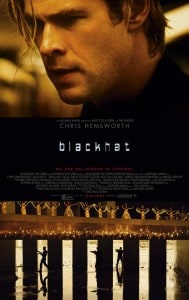 Cybercrime is a timely topic to be sure, but Blackhat isn’t interested in tapping into the paranoia and treats the digital front lines as a mere gateway into the artful universe of director Michael Mann. Granted, watching someone hack is not thrilling and inherently non-cinematic, evidenced here by a hokey CGI sequence early on that takes us inside a sever and visualizes a computer virus taking over. On the other hand, the terrifying notion of lives being altered (or lost) with a few keystrokes from a madman – like the nuclear reactor attack in the film’s opening moments – has heft.

In Blackhat, the weightiness is tossed aside in favor of following a prototypically blank Mann protagonist, whose globetrotting adventure is full of fuzzy logic further exposed by a bland script and even blander delivery of its dialogue. Mann-erisms abound: blurred lines between lawman and criminal, moody music, pensive stares, and plenty of colorful ambient lighting, all coming together in his typically compelling composition. When material matches the director’s sensibilities (as in Heat, Collateral, and Miami Vice – which I will ever-defend), it’s a hypnotic experience. This material isn’t a match.

After the nuclear reactor disaster in China, Chinese and U.S. officials come together on the investigation. Chen (Leehom Wang) convinces F.B.I. Agent Barrett (Viola Davis) to cut a deal and release his M.I.T. buddy Nick Hathaway (Chris Hemsworth) from prison, where he’s serving time for bank robbery. The man they’re hunting used bits of code originally authored by Chen and Hathaway, making them optimal allies in the F.B.I.’s search for the villain. Chen also recruits his sister Lien (Wei Tang) to help the team. The script provides some throwaway line about her being a database administrator or something, but really she’s needed to provide Hathaway – Mann’s manly man – with someone attractive to hook up with. Never mind that their chemistry is non-existent.

Following bread crumbs from Los Angeles, to Hong Kong, to Indonesia, the team fights off the hacker’s heavily-armed hired muscle as Hathaway uncovers digital clues that inch them closer to revealing the enemy and uncovering his ultimate plan.

The screenplay from Morgan Davis Foehl seems determined to turn Hathaway into a modern, brooding super-sleuth. Not only is he a computer expert; he’s in peak physical condition, is a better investigator than seasoned F.B.I. agents, a crack shot with a pistol, and is knowledgeable in improvised weapons and emergency health care. None of these skills are explained and do not mesh into Mann’s measured approach, where the shootouts are methodical and everything is highly stylized through his digitally-shot filter. Complete, of course, with incompetent marksmen on the evil side of the conflict and crowds of people who don’t flinch at the carnage that surrounds them.

You could call the performance by Hemsworth effective in that it’s as wooden as it’s intended to be. The stoicism doesn’t make for an exciting hero to watch, however. Of the supporting players, Viola Davis stands out the most, probably because she has the most convincing thoughtful gaze.

The signature vision of Mann heightens the tomfoolery on occasion, with some sweeping skyline shots and evocative imagery, but a lack of tangible stakes and an obscure threat leave Blackhat adrift in the digital ether. It feels all of its 133 minutes and more, though at the end none of it seems to matter.