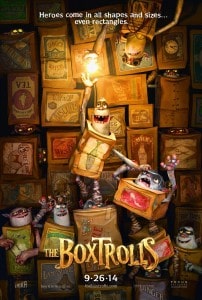 The leaders of Cheesebridge don white hats and sample varieties of cheese inside an exclusive tasting room all while avoiding making any real decisions about how to run the town’s government. One decision that’s made however is to “exterminate” the boxtrolls, who they believe are killers, a lie cooked up by the evil Archibald Snatcher (voiced by Sir Ben Kingsley).

But these adorable spirited trolls are kind hearted and, like our moms always told us, are more afraid of us than we are of them, If fact, they become so frozen with fear that they retreat inside the little boxes that they both wear as clothing and use as applause instruments.

Like Coraline and ParaNorman, Boxtrolls takes on tough subject matter not usually found in children’s movies. It addresses – both overtly and indirectly – such issues as murder, racism, slave labor, transvestism, disfigurement, anaphylaxis, child neglect, existentialism and, no kidding, human combustion.

Don’t let that deter you from seeing this delightful little piece though. It’s entertaining and fun and has plenty of jokes that adults will find funny. The film’s animation is better than its predecessors, and it’s easy to get absorbed into this odd little world and to feel sympathetic to its likeable characters, perhaps due to the painstaking process that brought this little city to life. Each boxtroll had its own look and personality, which was an unexpected pleasure, and there was incredible attention given to detail by the artists, down to Snatcher’s glistening, gnarling teeth.

That said, while the visuals are unprecedented, the story was rather predictable and didn’t bring much to the table creatively. There’s a heartwarming father-son dynamic that left me feeling a bit unfulfilled at the film’s conclusion, and for the most part, it’s a run-of-the-mill plotline.

Given the attention to detail and amazing amount of dedication, it’s simply too hard not to like something produced by Laika, even if it’s not as strong as their previous efforts. Kids will enjoy the goofy little trolls and parents can easily appreciate the film’s message and many of its comedic aspects. It’s not as funny as Paranorman or cerebral as Coraline, but The Boxtrolls is still an easy recommend.