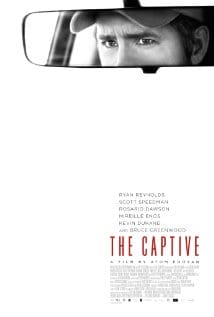 Atom Egoyan is trapped in a malaise that mirrors his usually weary protagonists. 20 years ago, the filmmaker reached the apex of his brand of analytical drama with The Sweet Hereafter, successfully mixing sober tragedy and dysfunction with a grim tone. Something’s been lost since his mid-90s heights, however. Earlier this year came Devil’s Knot, a forgettable take on the unforgettable West Memphis 3 case, which was also wholly unnecessary on the heels of the three fascinating Paradise Lost documentaries. Now comes The Captive, which encapsulates the decline from observant intensity to made-for-cable melodrama by starting as a gutting study of a horrific situation, only to weasel out of messy situations with convenient catharsis.

Matthew (Ryan Reynolds) picks up his daughter Cass from skating practice and stops off at a diner to grab that evening’s dessert, leaving the young girl alone in his truck. With cherry pie in hand, Matthew returns to his vehicle and finds that Cass has vanished without a trace – apparently with no footprints or clues left in the thick blanket of snow on the ground. The distraught father relays his story to detectives Nicole (Rosario Dawson) and Jeffrey (Scott Speedman), the latter especially wary of inconsistencies.

Eight years after the abduction, Matthew still drives the same truck and has left Cass’ trinkets arranged in the cab just as they were on that fateful day. His distant wife Tina (Mireille Enos) drowsily goes about her work as a Niagra Falls hotel housekeeper when familiar, Cass-centric objects start mysteriously appearing in the rooms. More evidence that Cass (Alexia Fast) is still alive surfaces as the cops try to dismantle an online predator group ran by creepy-guy Mika (Kevin Durand).

One thing Egoyan and his co-scripter David Fraser do well in the first half of the film is hop around in time. We constantly jump between the present and the past with no titles or blunt markers, the only context coming from the characters. It’s an effective way to create an air of discomfort in an uncomfortable story, tracking the progress of the case and the psyche of those involved. The problem is that it’s almost too easy to keep up. The Captive lays most of its cards out on the table from the very beginning. We know Cass’ fate and that another character is eventually going to meet a similar one, it’s just a matter of the narrative circling back and catching up with itself. Instead of nuanced exploration of the situation, the plotting becomes mechanical and more of a gimmick than an enhancement of the story.

Performances are generally effective, with Reynolds and Enos standing out by subtly communicating unimaginable pain. The one exception is Durand, whose look and affectations make Mika come off as a Bond villain – he even has a contemporary lair complete with secret room and state-of-the-art technology. As details emerge and revelations are made, they make the investment from the cast feel detached from the dime-novel developments and over-the-top in their mawkishness. Simmering tensions and complicated emotions give way to cell phone tracking, surreptitious drugging of someone’s drink, car chases, and the like.

Going so far off the rails undermines what had come before, making everything feel cheap when organized kidnapping and pedophilia is anything but light material. It makes sense to not get too graphic – and The Captive does not, but the heinous nature of the topic is lost in generic suspense-thriller tropes that help tie everything together unimaginatively.