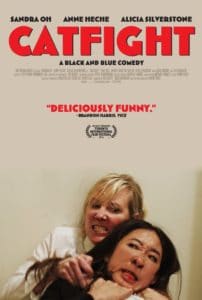 The title of writer/director Onur Tukel’s latest is fairly straightforward, perhaps a bit of an understatement as a descriptor, but straightforward nonetheless. Catfight has catfights; more than one, actually. Although, the catfights contained within Catfight are not your stereotypical, garden variety physical altercations between females that would warrant that label. There is no hair-pulling or face-scratching. There is nothing but an abundance of pure, unfettered brutality inflicted upon the faces of the film’s co-leads.

Dispensing, and therefore receiving, this brutality would be Sandra Oh and Anne Heche, playing a pair of old college roommates that have not seen each other in quite some time; during which, their mutual contempt for each other has been festering instead of dissipating. Their animosity toward one another is reignited at a social function wherein old judgments are resurrected alongside new ones quickly leading to a no holds barred exchange of fisticuffs, each landed blow enunciated with exaggeration.

The cause of their animus is unknown for the most part. The only clear discrepancy between them would be their views on the “war.” Veronica (Oh) buoys herself with an over-appreciation of wine and the wealth generated by her husband’s defense contracts. While, Ashley (Heche) spends her time expressing the horrors of the world through her paintings which are laden with reds and yellows because blue is a bullshit, cutesy color. Yet, regardless of their respective outlooks and viewpoints regarding the war in the Middle East, their disdain appears to be deeper than that. The war feels more like an excuse than a catalyst.

The war itself is discussed and presented in a manner more befitting the Bush era instead of the current year with Tukel continually invoking the color-coded hierarchy of threat levels. However, that appears to be the point as Tukel presents their vicious rivalry as a cyclical loop of dominance and pain with violence begetting violence as the two oscillate between perceived winners and losers with no end in sight as any word or action can, and inevitably will, be misinterpreted as a slight or an infraction. 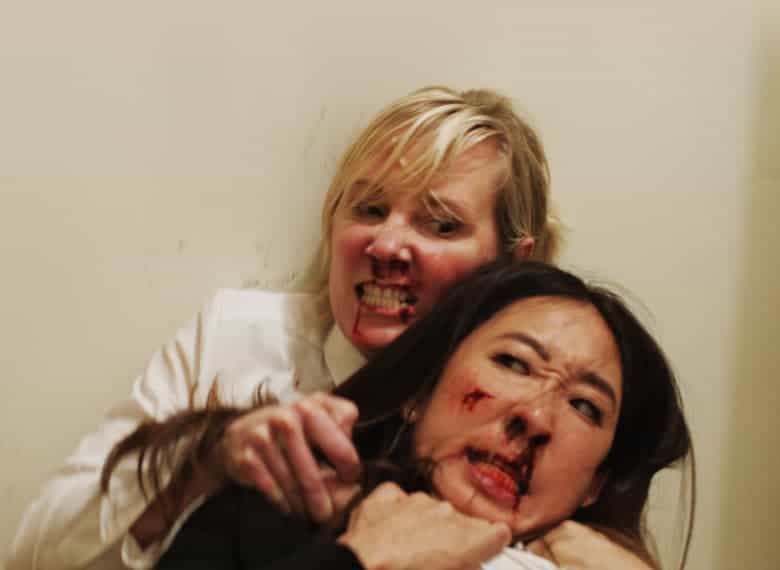 Tukel’s discussion of the war is not a pointed one by any means. It is decidedly broad in its implementation and much like the two women fighting at its center it feels more like an excuse than a catalyst. Also, his proposed correlation grows rather redundant as the physical altercations between Oh and Heche that are the centerpieces of the film are simple and utilitarian; devoid of any creativity, just drawn-out volleys of haymakers, an unrelenting ping-ponging of abuse like they are rowing a boat down a stream of broken capillaries as each of their faces are seemingly in open appreciation of the incoming fist about to land. Which could be a comment in of itself.

Although its themes are broad and somewhat simplistic, Catfight stills manages to provide enough black humor in order to make the whole ordeal relatively entertaining. Obviously, there is the initial curiosity of witnessing Sandra Oh and Anne Heche beating the daylights out of each other but both of their performances encompass more than merely knuckle-fucking each other’s faces. Oh provides some much-welcomed warmth to the production with her depiction of grief and regret. While Heche revels in her character’s seething rage, lashing out at every opportunity afforded to her.

They are not the only ones, though. The film is balanced out with solid supporting appearances as well. Much of which provide a great deal of the comedy that resides in the valleys of peace between the co-leads. Alicia Silverstone, as Ashley’s lover, whose growing obsessiveness delivers some laughs in an awkward baby shower. Or, Ariel Kavoussi as Ashley’s long-suffering assistant, timidly drawing blue bunnies as a windfall of schadenfreude garnishes her newfound success. Plus, small roles capitalized on by Tituss Burgess and Dylan Baker.