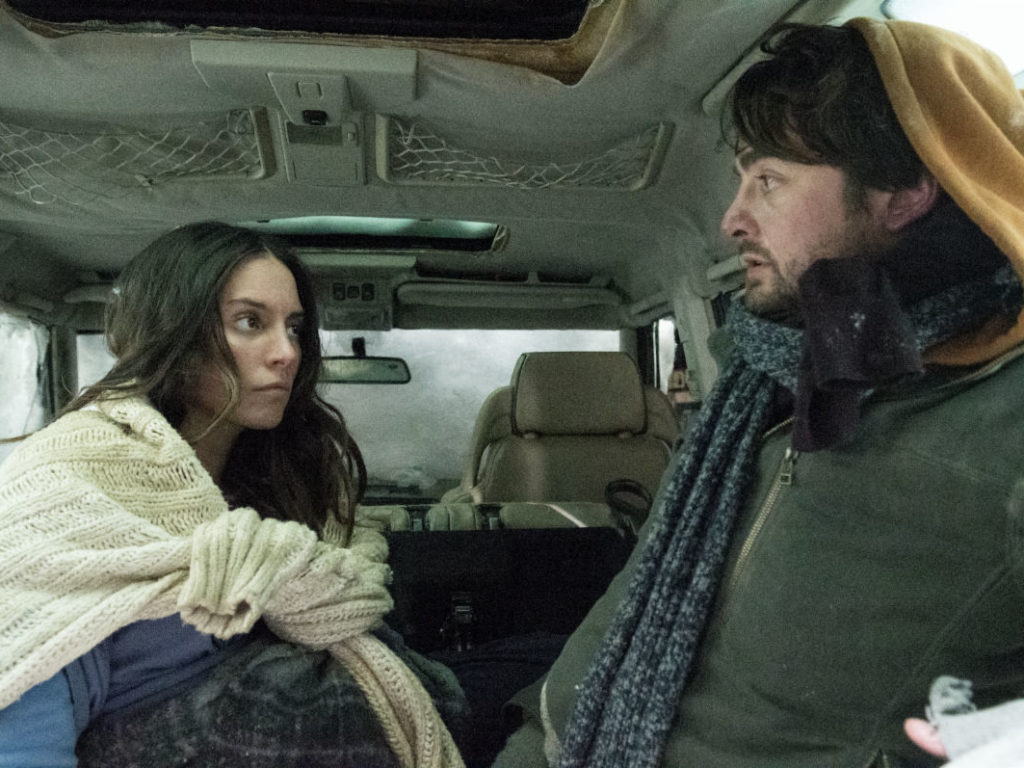 I’ve written time and again (and again and again) about my fondness for containment thrillers,  stripped-down thrillers that feature a person or group trapped in a perilous situation — be it a ski lift, sauna or, in the case of Brendan Walsh’s Centigrade, a car during a horrendous blizzard. While it is indeed harrowing and despite my partiality for the genre, the film’s lack of compelling central characters and substantive narrative movement prevent it from rising above the slew of other similar titles.

The film stars real-life couple Vincent Piazza and Genesis Rodriguez as Matt and Naomi, spouses who travel to Norway on a book tour for pregnant Naomi’s latest novel. Taking place in 2002, it opens with the two of them waking in their rental car to find that they fell asleep after pulling to the side of the road during a blizzard and are now completely snowed in. The car won’t start, and they’re miles away from civilization.

One element that was important for director Walsh to convey in this story was the believability of its characters, and that becomes evident early on in the 89-minute runtime. Though there’s little in the script to truly connect these people to the audience, they feel authentic in their interactions with one another. They get stressed, bicker, fight, make up and care for each other, much like any real couple. Emotions run high for multiple reasons, not the least of which is the fact that they are trapped in a car with little food or water.

Naomi wants to break one of the windows and try walking to the nearest town, but Matt protests, holding out hope that someone will drive by and see them. How this would happen, considering they’re completely buried in whiteout conditions, is anyone’s guess. After several days trapped, the snow surrounding them turns to ice, freezing the windows and doors shut, so their options become severely limited.

The movie is touted as “inspired by true events,” but I couldn’t find anything in my brief bit of research that is similar to what happens in this film, unless Walsh is just basing this claim on someone who got stuck in a car at some point, which definitely has happened, yes. It’s evidently a compilation of multiple survival stories, but it’s probably best not to go into this thinking someone actually had to endure what you’re about to see on screen, especially toward the end.

There’s unfortunately just not enough here to recommend Centigrade over the horde of other containment thrillers. Walsh does a more-than-adequate job of keeping the audience on its toes, despite the cramped location and two-character setup, but I couldn’t help but feel like this entire story could have been compressed into a sub-60-minute short film without losing any of the suspense or plot.