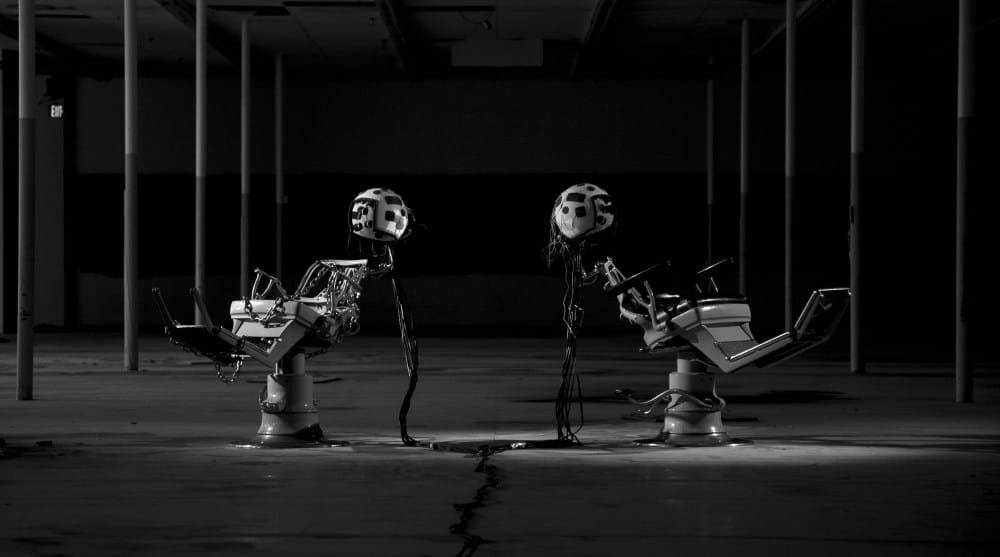 Our world is in desperate need of more empathy, but the commoditized version presented in the thought-provoking Empathy, Inc. probably isn’t the way go, even if it were possible.

The film’s concept is genius, both in the grand ideas and the simple execution of them. The black-and-white cinematography is beautiful, and the solid performances earn our compassion or derision, based on their part in the empathy-generating scheme. Some grasp on the contained drama is lost by making suspension of disbelief more difficult in a bumpy final act, but this is quality, lo-fi science fiction where the thematic whole transcends plot resolution.

Venture capitalist Joel (Zack Robidas) is made the fall guy when a big deal goes south. Out of a job, he and his wife, Jessica (Kathy Searle), move in with her parents. A chance encounter with old acquaintance, Nicolaus (Eric Berryman), provides an opportunity to invest in a startup called Empathy, Inc., which utilizes something called XVR (Xtreme Virtual Reality).

The idea is to allow well-off clientele to walk in the shoes of someone less fortunate, in theory making them better appreciate what they have. Sensations in this “extreme” virtual world feel completely authentic. After getting involved with Nicolaus and scraggly tech guy Lester (Jay Klaitz), Joel learns some consequences of XVR are far more “R” than “V”. 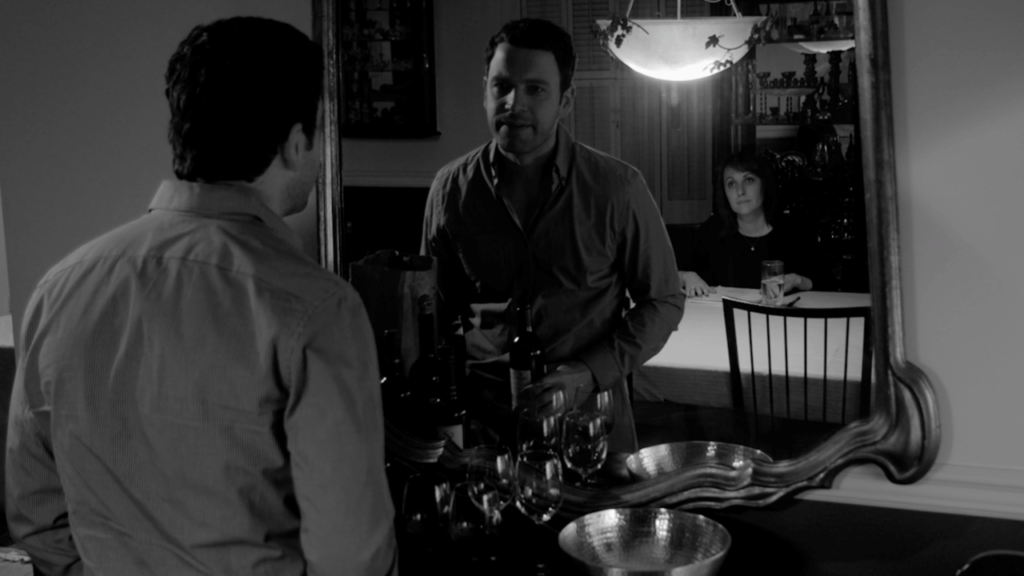 Before dropping us into the twisty narrative, the film opens with one of the characters delivering a Shakespearean monologue. The attention-grabber keeps us on our toes from the jump and leaves us to question its relevance and perhaps question the reliability of what we’re seeing after being introduced to the XVR concept. The black-and-white cinematography also gives the film a noirish, ethereal quality, with director Yedidya Gorsetman and cinematographer Darin Quan using shadow and light to set the tone.

The humble equipment used for the XVR – a plain computer OS used to boot up the program and what looks like a repurposed Spaceballs helmet worn by the client, who’s sitting in an old barber’s chair – adds to the charm. Whether by necessity or not, the filmmakers make the lack of flashy machinery work.

Our “in” to experiencing the empathy machine is Joel, with other clients reduced to a list on a spreadsheet, and we see his emotional and profit-driven excitement. His response leaves us with interesting questions to ponder.

Is XVR really providing understanding of those less fortunate or is it just designed to make the haves feel better about themselves? Will wallowing in poverty give perspective or just provide an excuse to act out dark fantasies without consequence, like some kind of messed up role-playing game?

This feeds into the relationships in Empathy, Inc. being transactional, from business dealings to interpersonal affairs. After first being confrontational with his father-in-law, Joel falls into salesman mode when he learns of a nest egg that could be used as potential investment. Talk with his colleagues is always about the bottom line or chasing the next potential score. With his wife, who’s found fulfillment acting in the local theater scene, currying favor involves the purchase of a house through methods she didn’t want. Joel isn’t an inherently bad guy and is sympathetic thanks to Robidas’s sincerity, but he’s just constantly making his life-work balance more tenuous.

Conflict becomes explicit and the script is a bit too obvious in its irony as Empathy, Inc. builds to a crescendo. While the machinations grow a bit tedious and commentary on privilege is superficial, the ideas on identity are more provocative. Ultimately, the film inspires thought about grander meaning, in addition to creating concern about the fate of all the players. It certainly earns empathy for the last character we see.