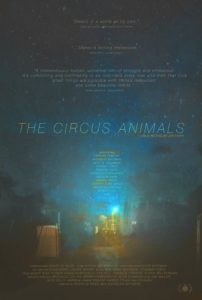 The passion behind Nicholas Bateman’s feature-length debut, The Circus Animals, is certainly evident throughout; one could go insofar as labelling the passion palpable or tangible, in a way, since it saturates every character interaction within every scene. It’s a film that admittedly wears its heart on its proverbial sleeve as every opportunity to thrust the emotion to the forefront is met with an eagerness that is situated as one of the film’s main strengths and, ultimately, its weakness all at once.

Certainly, one can appreciate and respect the level of enthusiasm on display by the filmmaking collective that comprises the whole of the film; a rag-tag assemblage of impassioned neophytes looking to create important art to gain fame and propel their careers, all of their interactions and efforts captured on an accompanying project by a documentarian recording the behind-the-scenes happenings. However, that enthusiasm overextends itself on occasion as ardent collaborators past the threshold well into desperation, pressing and over-straining emotion within certain scenes where little reside (or needn’t), flirting with artificiality with the help of sentimentality.

The occasional overindulgence in emotion doesn’t derail the film entirely; in actuality, the negative effects of these instances are periodically absorbed through calibrated alignments of the equivalent components – every now and again, the elements line up harmonious, tapping into a moment of unfiltered sincerity demonstrating that they are capable of creating captivating drama.

Two scenes that are prime examples of this sincerity can be found within the candid, behind-the-scenes documentary portion of the film. The first of which consists of the lead couple (former lovers played by Bateman and Katie O. Solomon) preparing for and shooting a love scene while their current love interests ((the makeup girl (Hannah Lewis) and the director (Francis Cabatac)) look on, uncomfortable with the display; peering out through a porthole found in the gap between the bodies before her, the makeup girl struggles to watch as her eyes wander with fingers trying to provide cover, yet the sounds of the embrace seem to pull her back, the painful exhibition grasping her focus, the ache of which is apparent in her eyes indicative of the wounds being cast.

The second scene worth mentioning is much smaller and less complex than the aforementioned. It entails nothing more than a phone conversation between the producer (Edmond Cofie) and an unknown person as the production is stumbling towards the finish line with available funds dwindling. Everything seems to be falling apart and at this point in time, writhing on the alleyway wall with the window of opportunity closing, the producer pleads for more time with a sense of urgency, anger and frustration circulating in back-lit blue. The cinematography, the acting and the lighting all coalesce, once again capturing something distinctive.

Within these moments it is evident that this assemblage is capable of delivering on their promise of creating something special. While it is refreshing witnessing the level of earnestness involved, it can become overbearing at times when every other scene and sequence is allocated the same sense of urgency found within the producer phone call. Unfortunately, they are incessant with their attempted promise delivery leaving little room for quiet moments and/or pockets of insignificants, spaces reserved for contemplation or, at the very least, a respite from the continued pressing.

THE CIRCUS ANIMALS I Theatrical Trailer from Nicholas Bateman on Vimeo.