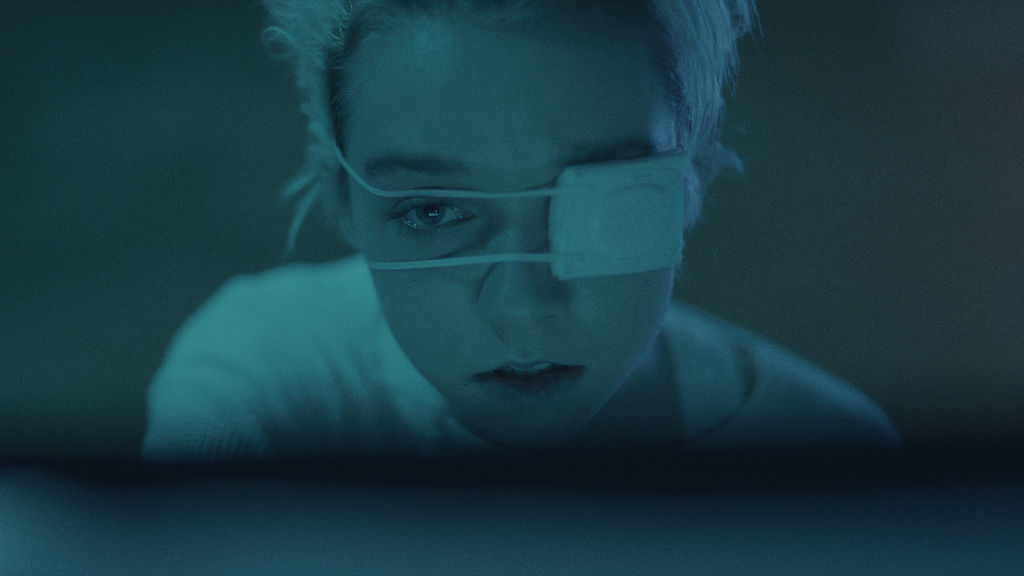 When Jeremy (Landon Liboiron) notices Sarah (Julia Sarah Stone) pull Philip K. Dick’s “We Can Remember It For You Wholesale” from the bookshelf, he encourages her to read it, praising the author for having “genius concepts.” The classic sci-fi short story concerns a man’s muddled perception of reality due to false memory implants and the powerful influence of unconscious personality traits on his ego. The celebrated author was no stranger to the influential works of Swiss psychoanalyst Carl Jung. While the 1990 Schwarzenegger flick, Total Recall, is based on Dick’s narrative, Come True is entirely different yet delves into similar Jung-inspired themes.

Anthony Scott Burns’ sci-fi horror is a nail-biting terror ride for all, but being familiar with Jungian concepts, especially the individuation process, makes Come True all the more cerebral and enjoyable. Each chapter of the film – “The Persona,” “The Anima and the Animus,” “The Shadow,” and “The Self” – is named after a component in Jung’s model of the human psyche (though it’s odd that ‘persona’ is used instead of ‘ego’). Naturally, the film is a psychoanalysis of its characters, who are ironically underdeveloped.

Considering Burns is credited for writing, directing, editing, cinematography, visual effects and music (“Pilotpriest” is Burns’ DJ pseudonym), much of the film’s success or lack thereof rests on his shoulders. He’s clearly a talent and probably a perfectionist. This is the first feature he wrote and, as demonstrated in his original shorts Manifold (2013) and Lost Boy (2016), Burns likes to leave information up to his audience’s imagination.

The film eerily opens with a ghastly phantasmagoria followed by an awakening Sarah. She suffers from insomnia due to chronic, recurrent nightmares; drinks three to six cups of coffee a day; and avoids sleeping alone. The 18-year-old takes part in a sleep study that unexpectedly forces her to face her unconscious head on. Jeremy, who is co-orchestrating the study, proves to be too fascinated by Philip K. Dick-like ideas, when his reckless methods heave his test subjects and colleagues into a real-life Jungian night terror.

Most horror films are shot with hard, dominant shadows and a defined killer or monster. Here, the threat derives from an undefined and unnatural merging of the conscious and unconscious. The recurring nightmares (which boast impressive VFX) contain a haunting stone-corpse figure and evolve into something a bit different each time.

With the scares being shrouded in mystery, we get an extra layer of fat to chew on. Come True is filmed almost entirely during the night, with prominent pretty lights and disciplined depth-of-field fashioned like a Michael Mann film. Burns’ decision to never include background extras makes the populated city feel like a ghost town, adding a sense of isolation and helplessness to the characters.

The final chapter, “The Self” – the name of a concept Jung describes as “…the total personality which, though present, cannot be fully known” – is fittingly the most surreal. Some eye-bleeds and fangs add more questions than answers. And the out-of-the-blue sex scene accompanied by moody Electric Youth vocals makes me question what Burns was smoking when he penned that into the script. You can get away with a sex scene, but a love-making scene must have proper character-relation-development first.
Come True thrives in the absence of answers, so the final answer in the story is an unpleasant surprise and comes off as a cheap plot device. Sarah’s muddled perception of reality – like in the final chapter Dick’s “We Can Remember It For You Wholesale” – is the kind of content that makes the story great. It forces you to put thought into what you are watching, and the more you do, the better the film becomes.