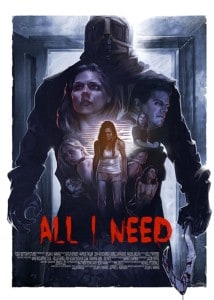 The setup for Dylan Narang’s feature debut, All I Need, is simple enough: a girl awakes, tied up in a room with multiple other girls – some dead, some unconscious – and she’s unaware of how she got there. Now she must escape before a masked killer comes back and kills her.

Sound familiar? Where this film slightly deviates from those like it is that there’s another story unfolding while the girl, Chloe (Caitlin Stasey), is trying to make her escape. The perspective randomly shifts to a guy being sent on seemingly random errands by a seemingly random Russian man over the phone. The two stories appear to have nothing to do with one another, but guess what? They eventually converge.

Unfortunately, it isn’t until the very end that this happens, and even when it does, the reasoning behind it is completely baffling, raising more questions than answers. Maybe this would have worked if the side plot was at all interesting or if the how and why was better explained, but as it stands, we’re left with a slightly generic slasher with an underdeveloped twist.

Any semblance of suspense brought into the film during the cat-and-mouse sequences is broken by the inability for any of the girls to act like rational human beings, causing them to make asinine decisions that left me wanting to scream at the screen – something I refrained from doing, due to the abundant amount of silence within the film. It was this lack of dialogue, music and ambient noise was actually one of the strong suits in All I Need, as it helped set the mood in an otherwise lackluster environment.

It’s clear that Narang was trying to create something more complex than just random girls stuck in a house, but with most of the film being just that, there’s very little substance here. The killer wears this odd costume that looks like a hazmat suit from the ’50s, but there’s no explanation as to why, and we also never really get a sense of where these people are, how they were abducted or why some of them are alive and some are dead or why he removes some of the dead but leaves others.

With so many other films like this out there, it’s tough to recommend All I Need. It attempts to break away from the formulaic elements of the slasher genre, but just misses the mark.