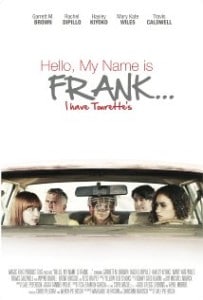 Figuring out how to get an audience to see a film that viewers may have preconceived notions about can certainly be a challenge, and it rests in the hands of the filmmakers and promoters to do just that. Hello, My Name is Frank… – a coming-of-age, road-trip film that features a developmentally disabled individual – appears on the surface to be exploitative in the worst kind of way. However, this film is filled with endearing characters on a journey that isn’t at all exploitative and has plenty of heart, laughs and cussing.

The film centers around Frank (Garrett M. Brown), an elderly man with severe Tourette syndrome, and Laura (Rachel DiPillo), a recent high-school graduate coping with the recent loss of her mother, who was Frank’s long-term caregiver. While Laura prepares to go on a road trip with her best friends, Alisa and Kim (incidentally a trip her mother insisted she take), she tries to find a suitable caretaker for Frank. However, as events unfold, Laura ultimately decides to take him along for the ride.

People with severe Tourette Syndrome exhibit physical ticks and profanity-filled outbursts. It’s the sort of condition that, when portrayed poorly, comes off as insensitive and exploitative. However, the filmmakers approach Frank’s mental condition matter-of-factly. Yes, there can be humor found in his outbursts, but the filmmakers don’t linger on them or try to milk them for comedic effect. You hear Frank have an outburst, have a chuckle or guffaw, and then they move on. This is not a “disease-of-the-week TV movie” but rather a coming-of-age ensemble comedy.

The film features uniformly strong performances from its cast, both young and old. DiPillo does a great job of conveying the emotional turmoil Laura is going through in this period in her life, and Hayley Kiyoko does a fine job of playing Alisa, the “party girl.” Fortunately, her character isn’t portrayed as, nor behaves like, the stereotypical girl seen in other films. Mary Kate Wiles plays Kim and is truly affecting as a young woman facing her own crisis.

Finally, Brown is fantastic as Frank. Despite his affliction and social awkwardness you really get to know the man inside, and he is truly endearing in a Forrest Gump kind of way. In less-empathetic films, especially low-brow comedies just meant for laughs, they might have milked the disease for all its worth and made the whole story about Frank’s outbursts and not the human being inside.

Dale Peterson not only directed, but also wrote, the story and screenplay with the help of Christine Bartsch and Margaret Kerrison. Their story focuses on real-world questions and concerns that real teenagers would face. Where do I go from here? What will I become? Who am I? The filmmakers allow each character’s arc to develop as the film progresses.   You don’t just see the main characters growing but also the supporting characters they meet as well.

Hello, My Name is Frank… is an unexpectedly charming little comedy that features endearing characters who are well performed by the ensemble cast. Funny and sensitively written and directed, this is a solid entry into the coming-of-age genre.