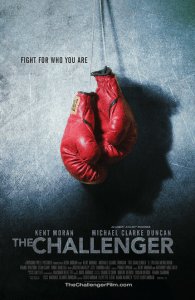 When people call films “formulaic,” they are undoubtedly referring to the fact that those films follow the same structure as many that have come before them – predictable, unoriginal, not very compelling or even boring. Movies have been around for more than a century now, and it goes without saying that, at some point, one film is going to look like another you may have seen before.

After all, films are broken up into genres, and each one comes with its own anticipated tropes. The gangster film, the zombie film, the slasher film – when mentioned, you can likely come up with three or four story elements inherent to that particular genre.

Because genre films have that air of familiarity to them, it falls upon the filmmakers to find a unique and compelling way to present their stories. Yet director, writer and star of The Challenger, Kent Moran, has taken the classic Rocky formula and given it an engaging and heartfelt re-imagining in this boxing drama.

Struggling Bronx auto mechanic Jaden Miller (Moran) is up against the ropes. He’s having trouble at work; he’s struggling to make ends meet; and to top it all off – as though things couldn’t get any worse – he and his mom (S. Epatha Merkerson) have been evicted. Miller’s only hope of coming out on top seems to be a pipe dream of striking it big in the lottery. Things look bleak.

That is, until one night he happens to meet legendary boxing trainer Duane Taylor (the late Michael Clarke Duncan). Miller sees a way to keep himself and his mom off the streets, and Taylor sees a man, an untrained fighter, with the heart and desire to go the distance. Knowing the odds are against them, they set out to prove the naysayers wrong and win the heart of a demoralized city in the process.

There’s no beating around the bush; Moran’s film is a retread of the Rocky formula. Moran even acknowledges that by giving a visual nod to Sylvester Stallone and his formulaic – yet highly regarded – franchise. When done right, you can end up with great underdog films like The Karate Kid, Warrior or even the underappreciated Best of the Best. Done wrong, well look no further than The Karate Kid, Part III. Everyone loves an underdog story, and if film goers can get behind that underdog, then they are willing to watch where the story goes, even if it’s a bit familiar or, in this film, a tad melodramatic.

Moran has written a grounded and engaging character in Jaden Miller. He is not just some random punk on the street. He’s a good man just caught up in some bad times and is doing all he can to get ahead. Who can’t relate to that? However, he has also written some great supporting characters who portray underdogs as well. There’s his mother, who wants the best for him, and then there’s his coach, who hopes to right wrongs from his own past.

Moran makes a great feature directorial debut, and he pulls out some solid performances from his leads, including himself. Merkerson is strong as his mother. There is one particular scene where she gives a powerful performance as she tries to stay strong but cannot hide the fear she has, knowing her son is taking a beating for a living.

Duncan, in his final onscreen performance, is forceful yet tender as Duane. He does a fine job of conveying the hopefulness and trepidation he faces as he takes a new fighter under wing. Finally, Moran himself is very good as the film’s protagonist and has great chemistry with Merkerson and Duncan. The mentoring scenes between Duncan and Moran are particularly strong, allowing you to get a sense of the respect, admiration and caring that’s developed between these two strangers. If that thread didn’t work, then the entire film would have likely folded in on itself.

The Challenger is an affective boxing drama that takes a well known formula and deviates from it just enough to allow the film to stand on its own two feet. It’s a notable calling card for a young director who shows he can not only act, but also write and direct actors as well. Even though you may get a sense of where the film is heading, you still become drawn into the story and may even end up cheering by the end.

This is an entertaining movie and serves as a touching swan song to Duncan, a fine actor who died not very long after production was wrapped.

The Challenger doesn’t take the title, but it does go more than enough rounds to make you sit up and take note.