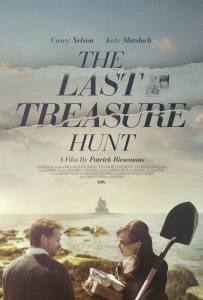 Oliver and Lucy Sinclair were raised on an island. Every year their father, Robert, would create elaborate treasure hunts where the kids would need to run about the house and the island in order to find clues that would lead to a hidden treasure.

Robert had a rather esoteric style of thinking and speaking that he tried to instill in his children. But, like all children, they grew up, and what was once magical and fun now seems rather childish and quaint. After the unexpected passing of their father, Oliver and Lucy – now estranged due to a squabble – arrive home to settle the estate but discover they must participate in one last treasure hunt to receive their father’s inheritance.

The Last Treasure Hunt, Patrick Biesemans’ feature directorial debut, is an engaging examination of a family that looks at the influences parents can have on their children’s worldview and the ugliness of sibling rivalry. On the surface you may think that this will be a simple tale about a brother and sister going on one last adventure, but there is more to this film than just the hunt.

In the first few minutes of the film you see that there’s a divide between these siblings. You immediately get the sense that Oliver, who’s older, still treats Lucy like a little kid, even though she’s now in college. Lucy still clings to the playful nature that their father brought out in them, but Oliver – thanks to his own domestic problems – finds it childish and immature. This dichotomy plays out throughout the film as the layers are peeled away to reveal how these kids grew up to be the individuals that they are and what has driven them apart.

Lucy and Oliver, played by Kate Murdoch and Casey Nelson, respectively, have chemistry that simmers, and you completely buy them as brother and sister. The film was written by Murdoch and Nelson, which undoubtedly contributed to the naturalness of their on-screen chemistry. They struck a nice balance with the emotional peaks and valleys, and rarely does it ever sink into excessive melodrama. When it does, they throw in some subtle humor to brink you back.

The naturalness to the jabs they take at each other, the amusing exchanges over dinner, the comfort they share in what others would consider awkward situations – they all come off realistically. Even the frank and mean-spirited comments are very much like exchanges real-life siblings might have. Murdoch and Nelson do a fine job of portraying that relationship, and their performances carry the viewer from the film’s beginning to its end. Thanks to these two, you become vested in the story.

Kandis Erickson plays Susan, Oliver’s girlfriend. Susan could have easily been classified as – and dismissed as – a mere plot device, but she proves to be a tender and sympathetic character with plenty of heart and pathos. The film also stars Jeff Grace, Charles Hoyes, Brad Benedict and Art LaFleur.

You don’t really know how things are going to unfold, but as the film progresses, you find yourself hoping for the best. After all, who wants to see siblings fight or hold unhealthy, long grudges?

Biesemans does a solid job directing, and his cinematographer Michael Ormiston does a great job of capturing the beauty and isolation of island living. Together they made The Last Treasure Hunt an engaging family drama that features some enjoyable, natural performances and a solid screenplay from a pair of writers who you’d think are related.