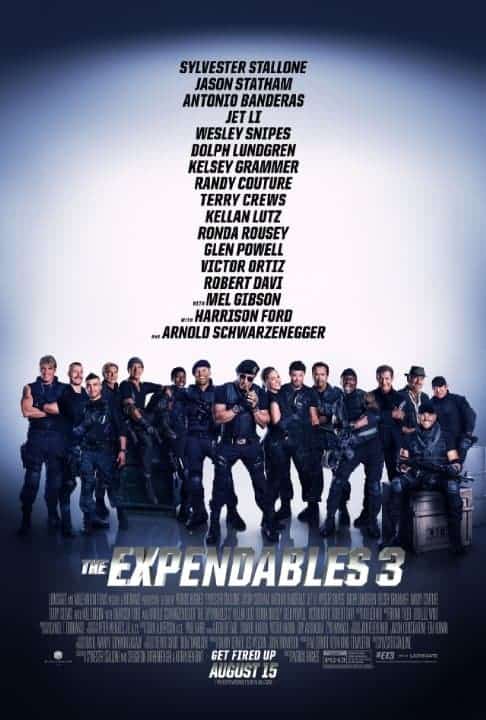 The ultimate testosterone-fuelled, ’80s-action throwback series, The Expendables, is back in its third and most boisterous installment to date. Touting more characters and mindless action than ever before, The Expendables 3 brings together a plethora of aging action stars and pits them against wave after wave of generic villains in an attempt to up the ante yet again. But in a post-The-Raid-2 world, is there still a place for this type of action that favors gunplay and explosions over meticulously choreographed martial arts?

The Expendables 3 is not a good movie. The plot is threadbare, and this time around there are so many characters that most of them get very little screen-time. Yet the dialogue is a mixed bag; some of it is laughably bad, and some of it is genuinely clever. Despite being a relatively poorly made film, I still had a ton of fun with it, and ultimately that’s what the filmmakers are going for.

Like the previous Expendables films, this one starts off with a big action set piece involving the crew, comprised of Sylvester Stallone, Jason Statham, Randy Couture, Terry Crews and Dolph Lundgren busting Wesley Snipes out of prison. Yes, the irony of this plot point is palpable, and the writers made sure to throw in a line about tax evasion (a nod to Snipes’ real-life IRS issues), which was a nice touch.

After this scene, one of the key members becomes injured and is out of the picture for the rest of the movie, much like how Jet Li vanished after the opening of The Expendables 2. It was a disappointment, as this character was one of my personal favorites, but with so much clutter already happening, I can understand why they made the choice.

After losing his teammate, Stallone’s character, Barney Ross, decides to disband the original crew and assemble a new team for one last job – to take down the asshole who hurt his buddy, played by Mel Gibson.   The new team is comprised of younger actors, Stallone’s way of passing the torch, and among them are MMA fighters Ronda Rousey and Victor Ortiz, Kellan Lutz and Glen Powell.

If this all sounds slightly ridiculous, it’s because it is. Fortunately, this entry is just as self aware as the previous films, and although there are plenty of callbacks and references, most of them aren’t quite as on the nose as in The Expendables 2. There are also far fewer old-man jokes this time around, a refreshing reprieve as they’ve more than worn out their welcome.

New among the cast this year is Antonio Banderas – who plays Galgo, one of my favorite characters in the series yet; Harrison Ford, who replaces Bruce Willis and really looks like he just doesn’t want to be there; and, for some reason, Kelsey Grammer.

The action in The Expendables 3 is much like what you would expect from an Expendables film – big guns, big explosions and big set pieces with an extremely long finale involving everyone facing off against an entire country. Although literally hundreds of extras are mowed down throughout the course of the film, it has a PG-13 rating so there’s no blood and only one F-bomb dropped.  Regardless, youngsters should probably not be watching this anyway due to the profuse death onscreen.

If you liked the last two Expendables movies, you will like The Expendables 3. It’s not a film that promises deep character development, strong performances or even a script that makes any sense, but it does promise balls-to-the-wall action, and on that front, it delivers.