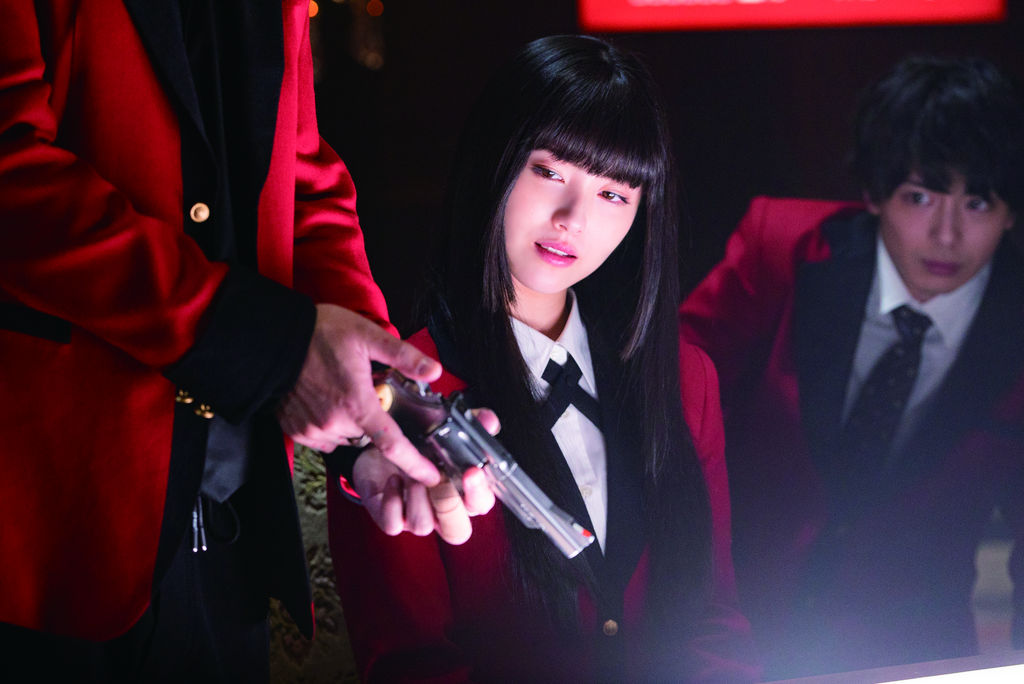 It was just last year that I wrote about the zany manga adaptation Kakegurui (translating to “compulsive gambler”), which screened at Montreal’s Fantasia Festival. A year later the zaniness is back with Kakegurui Part 2: Desperate Russian Roulette, a title that adequately indicates the increase in over-the-top, anime-inspired wackiness over the series’ first entry.

Tsutomu Hanabusa returns to direct, with the principal cast reprising their roles as rich kids at a posh high school that seems to be 100% focused on gambling rather than any actual school work. Sure, there are technically classrooms, but there’s not a teacher in sight and all these brats ever do is gamble every which way they can.

Taking place a short time after the events of the first film, the power dynamic of the academy is completely thrown off-kilter after Yumeko’s win over the student council. In a last-ditch attempt to regain its control over the student body, the council employs the help of Makuro Shikigami (Ryusei Fujii), a former student of the academy who was previously suspended for the violent tactics he used in order to win the games he played. After taking down several potential threats using some dirty tricks, Makuro must go up against Yumeko in a deadly game of Russian roulette.

If you’ve seen the first film, which is an absolute must to really understand anything that’s happening here, you’ll find yourself in familiar territory. The sensory overload is in full effect, with Hanabusa doing his best to make live action look and feel as to close to the animated version as possible, complete with insane overacting and visual flourishes that exaggerate character emotions and reactions to the highest degree possible. It’s a method that many will find grating and something that viewers of many anime-to-live-action adaptations have come to know and either love or hate.

While I wasn’t bothered by the craziness of the first film, the level at which things amp up in the sequel did get on my nerves more than once. Makuro is a wildly annoying character, with every utterance out of his mouth so overblown and intense that most of the time I just wanted him to shut up and play the game. Makuro also has this weird ability to see people’s emotional state, seeming to get off on the despair of others. This isn’t really explored too deeply and maybe comes into play later on in the series, but it seems fairly inconsequential in the grand scheme of things.

Still, the actual games are fun, and the colorful characters are enough to look past the more annoying aspects. Compared to the first entry, there are far fewer games the kids play, but the Russian roulette, which takes up a decent chunk of the runtime, is adequately thrilling and significantly raises the stakes from what takes place in Part 1.
Kakegurui Part 2 leans heavily into the concept that a sequel needs to be bigger and bolder than the original; and while this doesn’t always work in its favor, this is still an enjoyable bit of live-action anime wackiness, and I’ll be signing up for Part 3 when that inevitably drops in a year or so.