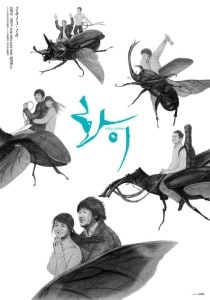 It’s been a decade since South Korean writer/director Jang Joon-hwan’s debut feature, Save the Green Planet!, an amalgamation of almost every genre swirling around a mentally unstable central character affected by his traumatized past; while, Hwayi: A Monster Boy plays out like a typical action film, the central character’s storyline possesses a number of similarities with that of Save the Green Planet! as Hwayi (Yeo Jin-gu) struggles to cope with his own trauma-filled past while slowly uncovering the sinister secrets behind his upbringing.

Hwayi’s upbringing is of the peculiar sort stemming from the fact that he was kidnapped as toddler by the ruthless Day Breakers crime group and held for ransom. After the ransom exchange goes south, the criminals are left with the child which they decide to raise as their own teaching him the sort of basics every boy needs to know like sniper skills, close combat and lock-picking. Raised by five fathers, all varying degrees of disturbed, Hwayi has been groomed to follow in their footsteps, into a life of crime and brutal violence.

The film follows Hwayi as he grapples with the next step in his life that will ultimately determine who he becomes – an artist or a contract killer. Pressed by his psychopathic father, Seok-tae (Kim Yun-seok), to join the ranks of the Day Breakers, Hwayi reluctantly obliges as not to disappoint and become the object of Seok-tae’s brand of heartless discipline. It’s during this contract killing that Hwayi unearths his true origins leading to mixture of confusion, outrage and a sense of betrayal, moving Hwayi to seek the truth…from behind the barrel of a sniper rifle.

Jang Joon-hwan presents this twisted tale in typical action film fashion as scene after scene plays out with blood-soaked brutality. Tension filled car chases, knife fights, executions and a multitude of head-shots are all displayed through an ever-changing array of camera angles, rapid-fire cuts and swift camera movements. The repeated use of quick zooms give the action sequences the feel of a video game cut scene while the impact of every crippling body blow is matched with a tremor of the camera. Hwayi: A Monster Boy is definitely not for the faint of heart as all of its violence is vicious, amplified by its stone-faced presentation.

Although the film stumbles from time to time when it pauses the action for scenes of emotional poignancy or when it tries to provide context to the character’s motivations, Hwayi excels in its tension-filled moments of action presented with breakneck speed. The film’s intensity culminates in the cramped quarters of an abandoned warehouse with two warring crime outfits fighting it out in a hail of gunfire and knife blades as sniper slugs indiscriminately rip through anyone caught in the sight line.