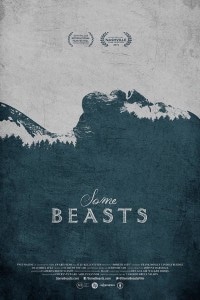 There is a certain allure for many people attached to the prospect of living simply, deep in the wilderness surrounded by the ambiance of foliage and fauna, tending to the soil and living off the land; it is a prospect that has successfully seduced many a wannabe mountain men, inner-searchers and predicament-escapers. The appeal makes sense given the rate at which the idea of woodland living has been romanticized over the years.

The man at the center of writer/director Cameron Bruce Nelson’s feature-length debut, Some Beasts – Sal (Frank Mosley) – is of unknown origins and motivations (for the most part), deciding to withdraw this information Nelson places the viewer in the thick of an already-developing narrative as he introduces the character and his situation through a succession of scenes forming a brief summary of our central character. Which is, at first, an idyllic realization of said prospect that slowly, over time, becomes a pile of insurmountable obstacles; and then, an oscillation between the two.

In the mix of all the manual labor, isolation and uncertainty Some Beasts remains relatively calm at its center; perhaps, due to the encompassing landscape and its atmosphere, the intrinsic beauty and tranquility of which Nelson and cinematographer Hutch capture wonderfully through restrained lensing and pacing, a patience that not only showcases an ability to capture such qualities but to also match and complement them while exhibiting a great reverence for the subject matter – the land, the work, and the people that occupy the two. Whether it be through the implementation of the score, provided by Stars of the Lid, rendering all actions and images an ethereal solemnity or through the performances of the supporting cast which instill a resounding sense of naturalism.

Anchoring the film is the central performance from Frank Mosley, converting the meager dialogue into a subtle showcase of expressions and body language with exhales of breath becoming his main delivery mode of emotion and sentiment, expressed through the strained inability to develop and deliver the words necessary; the more emotional segments of his portrayal consist of lines that remain incomplete and malformed like a mass of knotted tendrils ensnared deep within his chest; a simple, exacerbated breath communicating all you need to know, effectively filling the silences of Nelson’s screenplay and bolstering the utterances that see the light of day.

All of these aspects unite within the confines of the storyline’s uncertainty to provide a sense of comfort, a soothing quality dwelling simultaneously alongside the risks and hazards ever-present in their living conditions. Some Beasts calmly navigates an ever-changing landscape of emotion, imitating the life cycles of the crops displayed  in the film as initial excitement grows dormant as loneliness and worry flourishes before ebbing again to a rebirth of enthusiasm and so on; finding solace in the fact that nature will rebound and in the hope that nature will extend that luxury to those tending to its needs.

In his debut, Cameron Bruce Nelson has managed to present an effective portrait of humility in slow burn, a case study on the matter of adaptability as the nature of Sal’s situation remains in a constant state of flux, trying in earnest to readjust until finally realizing that he may not belong or be able to make do as nature decisively states its dominance emphatically. A bittersweet tale occupying the margins of the in between, in between the dusk of unrealized, cast off dreams and the threshold of promise and new beginnings.