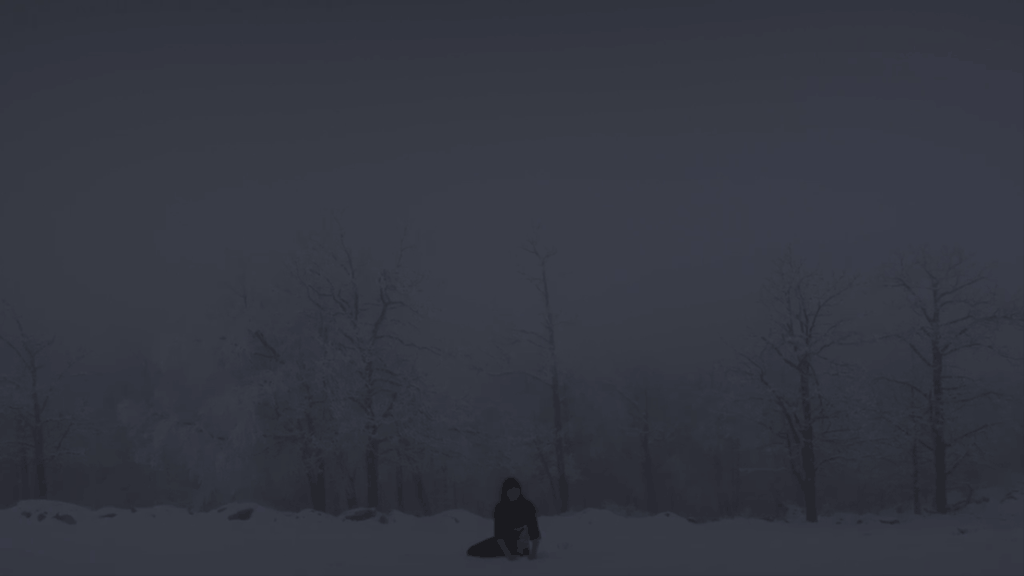 Death is abundant in Tears of God, the feature-length debut from writer/director Robert Hillyer Barnett (co-written with Diamando Proimos), manufactured at the hands of others or cultivated within the familiar palms of their own. Either way, death is a pervasive condition afflicting the congregation of a small church (of sorts) nestled in the snow-covered, mountainous landscape where they worship and suffer; live and, ultimately, die.

There resides a darkness, a blackness that their leader and priest (Future Islands’ front-man Samuel T. Herring) forewarns them of situated outside of the comfort margins of their ramshackle house of worship; more an abandoned auditorium, a rubble-strewn decaying interior of original functions now long-forgotten replaced and home to dust and desperation, where quasi-tangible shafts of light occasionally grace the inner sanctum of the sermon-attending parishioners like extended fingers of spirituality. 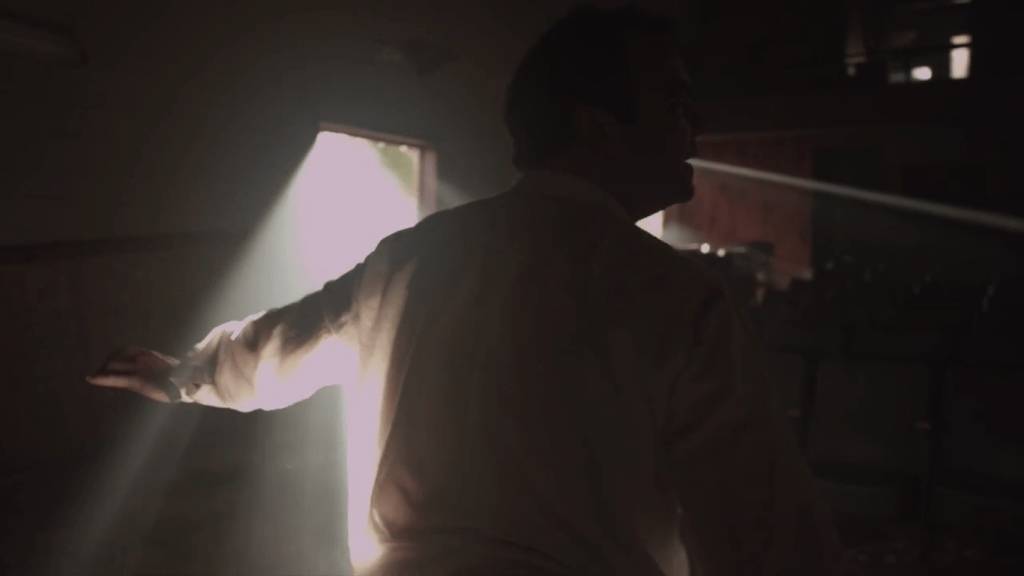 The spiritual sermons unfolding in the dilapidated innards are more akin to desperate pleas of care and awareness, lung-emptying appeals for attentiveness of the dangers stalking the outskirts of their self-curated safety and adamant calls of caution foretelling of devils and phantoms descending upon the land hell-bent on chaos and destruction. Although, the phantom (portrayed brilliantly by Lindsay Burdge) seems to get a little sidetracked with a newfound camera, enjoying the time spent manipulating others for the sake of performance.

The events are also foretold through on-screen text – chapter indicators at the outset, brief overviews of the proceedings to come. One such foreseen event – the cautioned chaos – does, indeed, make an appearance as prophesied; as the chaos descends – in the whirlwind of charred remains, flayed individuals and the other, sundry sorts of death details – one woman (Kate Lyn Sheil) searches the land for someone, anyone to resurrect her father while a colossal storm system coils its way to absolute annihilation of all. 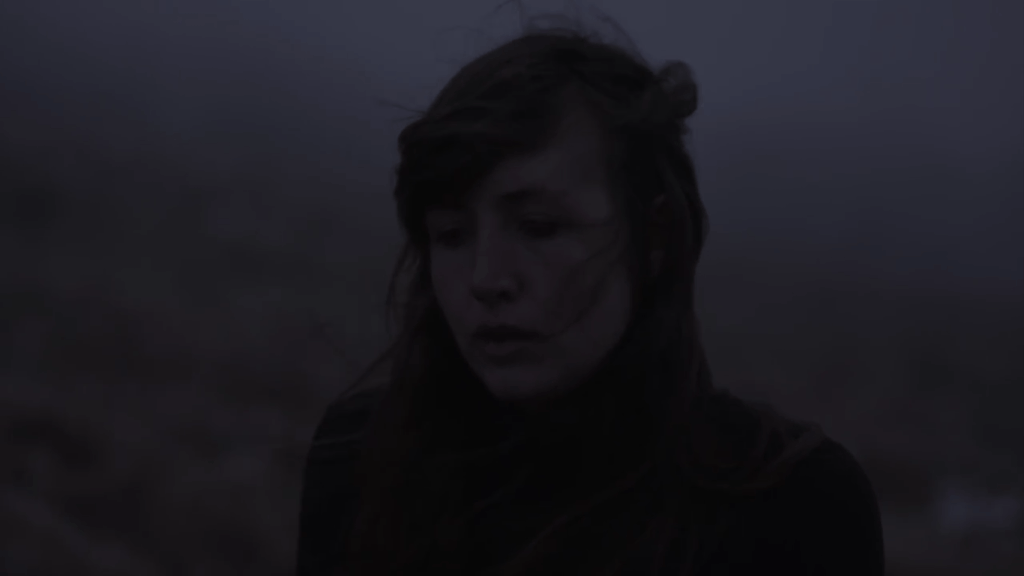 This catastrophic sequence of events is presented in a two-thread mixture – inert and active – oscillating between the two as Michael Ormiston’s camerawork remains stationary, imbuing the framed action with an air of menacing calculation, or when the camera becomes untethered and unpredictable in its movements, roaming the interiors/exteriors, swirling around the film’s inhabitants, following close or lagging behind or ultimately forsaking them in the stillness of a white-out wilderness. As if we are witnessing the footage of an otherworld documentation accumulated by a phantom company of existence recorders (with eye for great lighting).

Amidst the violence, the searching and wandering the film’s events remain cryptic to a degree. Even with the preceding chapter text signaling the actions to come, the actions themselves are still covered in an enigmatic patina of murkiness blanketing the darkness underneath. The divergent camera movements alluding to differing points of view that, in turn, allow for an endless array of readings and interpretations while true intentions and justifications stand unsubstantiated until the final frame, before segueing into an epilogue of text. 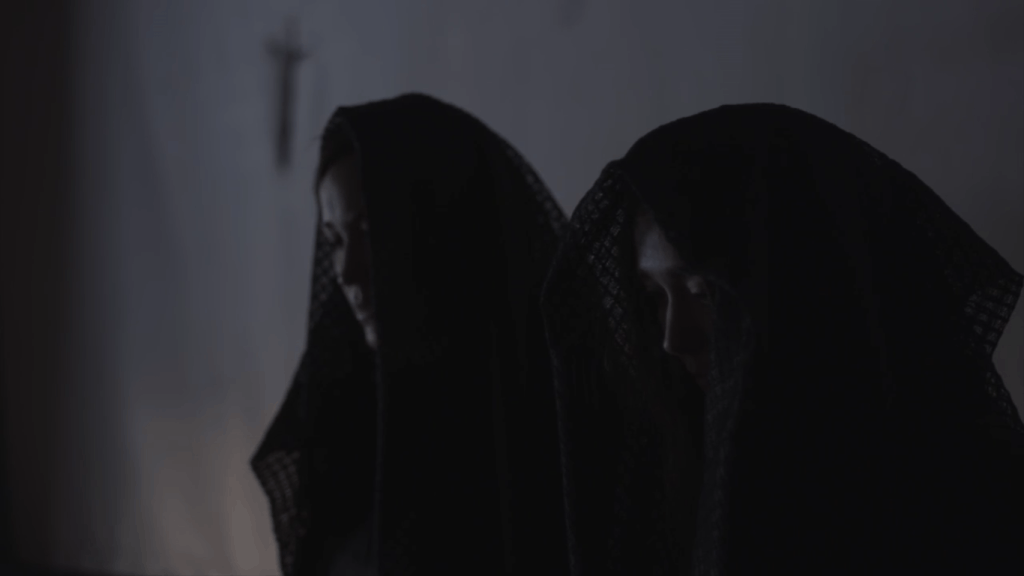 The question of meaning, one postulated at the beginning and remaining in rumination throughout, crops up continually given the nature of the occurrences unfolding in Tears of God. Why are these things happening? What justification is there for them existing? What is the purpose of this violence, these acts of sacrifice and aggression, if any? Or, are we merely witnessing vessels of electricity and viscera careening through the world randomly, devoid of purpose?

The veil that conceals the answers to these queries is one that is essentially peeled away through the ending quote epilogue that appears on-screen; a quote that, at once, answers the question of meaning while resonating that exact same question, unchanged and amplified, back out into the world infinitely.

2 Responses to “FOR FUTURE REFERENCE: TEARS OF GOD”