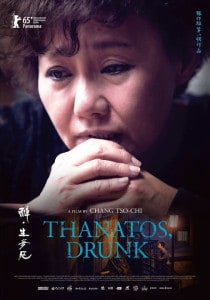 Thanatos, Drunk  is a fairly straightforward narrative, a slice of life excursion through the nightclubs and narrow back-alleys of Taiwan. Underneath the fairly mundane day-to-day activities that comprise the surface level plotline lays an elaborate tapestry of emotional entanglements as guilt, pain, love and indifference wrestle within everyone day and night. All matter of existential struggles present themselves throughout the languid days, every new development or occurrence is yet another thread added to the complexities of the interconnected web being woven until everything, inevitably, comes to a head, unraveling all around those involved.

Saturated in realism, sincere and genuine, aimless youths drifting through the streets of Taipei colliding occasionally; or, reluctantly alone with their own thoughts on the rooftop, in a self-imposed exile of contemplation, peering out onto the cityscape outline. The highway and still waters underneath. Thanatos, Drunk’s realism is afforded due to the brilliant performances from the entire ensemble. An extensive array of emotions effortlessly brought forth and displayed through casual conversations, drunken ramblings endlessly spilling forth or the more emotionally charged moments full of self-examination, guilt-racking and boiled-over frustrations. 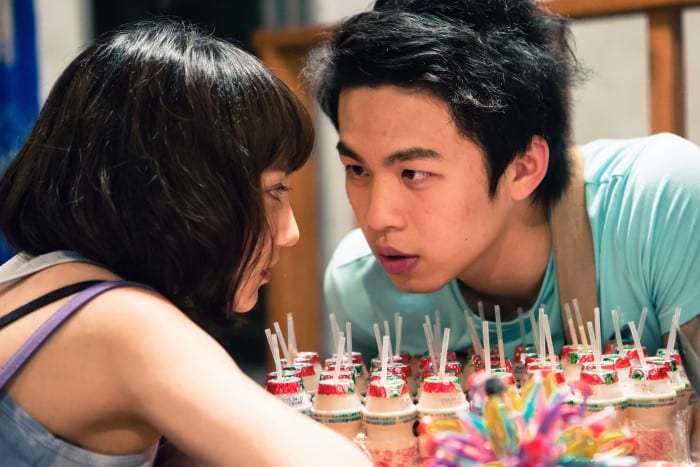 The daily activities of the group are of arbitrary focus with devoted screentime amongst each individual character being handed off routinely. One moment, the camera will be following Rat (Lee Hong-Chi) as he hocks vegetables in the market with beer in-hand and the next moment, we are privy to Shuo’s (Chen Jen-Shuo) occupational practices, nights spent entertaining female clients as a drinking companion of sorts.

The narrative thread of Thanatos, Drunk is loose, merely accompanying its characters seemingly without a clear goal or destination in sight, and random. Not only is the film devoid of a central character it also neglects to settle on any discernible resolution, opting instead to present moments here and there. An assortment of quiet moments along with impassioned interactions and tangents of the trivial. A wonderful composition of actuality, effortless in its persuasiveness to render the entire endeavor evocative of a trail-along documentary.

In order for Chang Tso-Chi’s sincere realism to be highly effective the film necessitates a tandem of exceptional performances, both in the cinematography department and that of the actors involved. Both aspects deliver admirably as Hsu Chih-Chun and Chang Chih-Teng’s camerawork resembles cinema-verite with refined hand-held aesthetics shadowing each character like a lap dog intermittently suffocating the activities with claustrophobic framing to capture the puzzling whirlwinds of some of the actions. 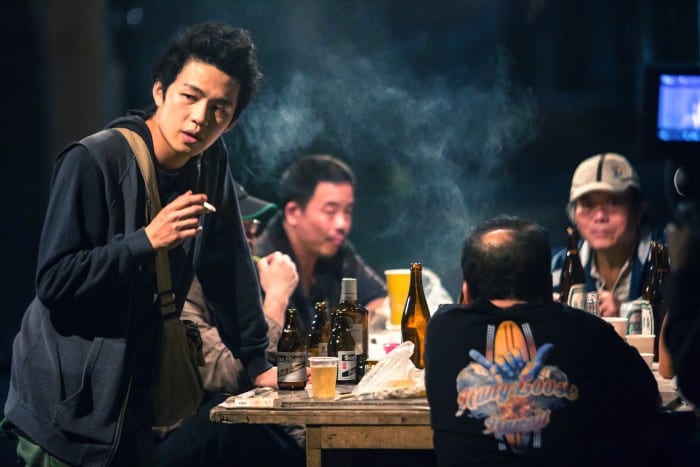 Complementing the docudrama feel of the visuals are the performances; a maelstrom of moods and emotions endlessly shifting due to the film’s constantly changing character focus. Everyone included brings their own degree of authenticity to their respective roles, appearing so natural within the film’s environment that an air of uncertainty begins to form. As if the narrative path of Thanatos, Drunk and its destination are unknown even to the actors themselves, or the film’s director for that matter.

There is a tranquility amidst the uncertainty of Thanatos, Drunk, transfixing in its unpredictably even though there remains a delicate sense of unease. The film’s prevailing atmosphere is condensed into a relatively small sequence wherein Rat, with his newly-acquired camera, films an ant and a maggot entangled with one another slowly inching their way to the edge of the kitchen table. A microcosm of the film itself, a visual representation of the internal conflicts wrestling within each character.