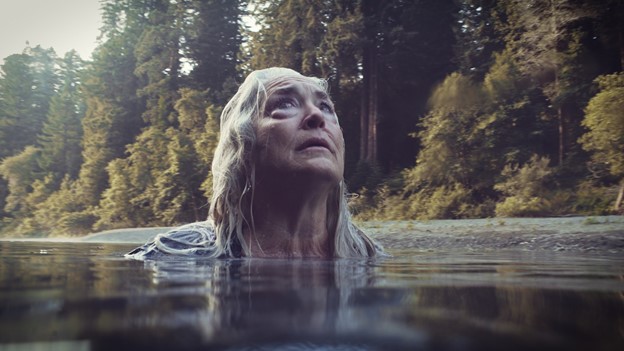 With Freeland, filmmakers Mario Furloni and Kate McLean deliver a small and intimate story embedded within the politics of marijuana legalization, that, while decent, just ends too soon for us to get emotionally involved.

While Devi (Krisha Fairchild) walks around the Cannabis Business Summit & Expo, the camera goes out of focus and whirls around the room. The hums from the marijuana machinery increase to an overwhelming buzz. The nauseating scene exemplifies Devi’s discomfort in the new world of legalized pot farming and business.

With her long, wild, white hair and loose-fitting clothing, she’s a hippie at heart. She’s been growing and selling the herb on her old farm for decades and living in accordance with its message. While Devi and her friend Ray (John Craven) reminisce on the good ol’ days, Ray reads a vow they once made: “We promise to live in community to protect the land, to be open to ourselves and each other.” Enter the new California law and in come the suits and ties. It’s no longer about the plant and the love but the big bucks.

The Humboldt County farmer has no choice but to turn legitimate if she wants her business to survive, but it proves to be an expensive and arduous process. Struggling for permits and cooperative business partners, Devi flounders into a downward spiral, and her character descent is all the drama and excitement of the film.

Although Devi is a woman of the Earth, she’s kind of a bitch. On one hand, it’s disappointing that the woman we want to root for isn’t too likable, but on the other hand, the depth of her personality turns Freeland into a character study with an extra hint of realism.

Furloni and McLean shoot for naturalness in their dialogue and direction. It comes as no surprise these two are documentary filmmakers by training. At times they mimic the documentary style, fly-on-the-wall approach.

One scene in particular starts in the middle of a casual conversation among Devi and her farmhands. The handheld camera focuses on one character to the next as they shoot the breeze outside and share a laugh over beers. Furloni and McLean are committed to setting a mood based on nature and camaraderie, but small talk and small actions can bore easily.

Freeland suffers from a lack of complexity, depth and conflict. You only feel any pressure in the second half of the movie, and just when things get exciting, the film ends. It likely wouldn’t have been realistic to budget, but Freeland would have greatly benefitted from another 40 minutes of screen time.

At an hour and twenty minutes, we get an incomplete story and, even worse, an incomplete character arc. There is so much more to Devi’s journey we’ll never see – a shame for a character with so much potential. Hopefully, we’ll see more of Krisha Fairchild on the big screen soon, as she is simply fantastic.