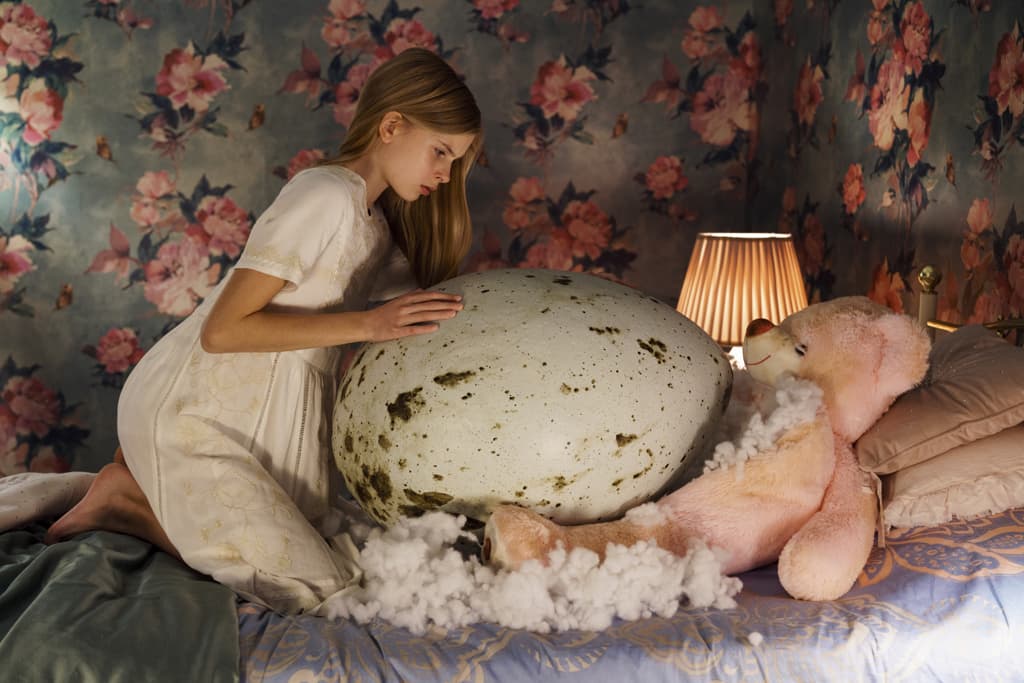 Writer Ilja Rautsi has a few satirical short films under her belt, with titles such as Helinski Mansplaining Massacre and Night of the Living Dicks. Hatching — also known as Pahanhautoja (Evil Graves), the film’s original Finnish title — isn’t such a lampoon/pie to the face, but the underlying horror-metaphor concept is the same. Here, Rautsi’s script stands as a metaphor for the effects of toxic parenting traits and components within family relationships.

Rautsi and director Hanna Bergholm communicate this through Alli — the demonic bird that adolescent Tinja (Siiri Solalinna) secretly nurtures in her bedroom. As Alli grows, she transforms from bird to Tinja’s evil doppelganger. The film begins with Mother (Sophia Heikkilä) filming her vlog, “Lovely Everyday Life,” with her picture-perfect family. She’s doing what everybody does on social media — presenting her livelihood to the world as bulletproof happiness. (Leaving Tinja’s parents nameless and crediting them as “Mother’ and “Father” tells me Rautsi wants everyone to understand this story is about all parents.)

Hatching’s mise-en-scène is almost totally presented in this social media fashion. Cinematographer Jarkko T. Laine often utilizes soft beauty lighting, which is superbly complemented by Production Designer Päivi Kettunen’s use of gentle colors. The props, wardrobe and set design are all dominated by white and pastel variations of gold, pink and green. They even go so far as to match the plants in the yard with the plants on Tinja’s bedroom wallpaper, yet underneath the perfect presentation lies the flaws within the family, the unfaithful wife and wittol husband, the pushy and controlling mother, the jealous younger brother, and so on and so forth.

The emphasis lies on the mother-daughter relationship. Mother, a former figure skater, tries to live vicariously through her daughter’s gymnastics, pressuring Tinja to a detrimental degree. When she encourages Tinja to best her friend in the gym, the seed of unfriendly competition is planted in Tinja’s mind, and, in effect, Alli responds.

Alli’s attacks are not random but are instead motivated by Tinja’s suffering. As Bergholm puts it, Alli represents Tinja’s “…hidden emotions, also her sorrow, her need for love.” In one scene, we see the doppelganger attacking Mother then cut to her hugging Mother and stroking her hair – a quick shot appearing to be a non-diegetic visual symbolizing Tinja’s repressed emotions.

Although Tinja regrets Alli’s actions, she continues to hide and protect her. She even bathes bird-form Alli as Alli blows bubbles in the tub. Alli isn’t actually pure evil but rather a part of Tinja’s character. (It would have been more interesting if nobody, besides Tinja, ever saw Alli). While Tinja is being secretive and moody, Alli leaves blood on her bedsheets, and Father (Jani Volanen) assumes his daughter has started her period. She has; the symbolism is quite direct.

Just as Hatching blends the literal with the figurative, it blends practical with computer-generated effects. Animatronic designer, Gustav Hoegen (Prometheus, Star Wars) crafts a beautifully disgusting creature. Alli hatching from her giant egg reminds me of the gremlins hatching from their cocoons: brilliantly wet and grotesque. The CGI is impressive in its own right, but I’m old school and believe pure practical effects would have been the better route to take. For example, the shot of Alli mending her lacerated mouth just inches away from Mother’s face pales in comparison to the famous face-to-face shot of Ripley and the alien in Alien 3.

Hatching is surprisingly filling for an 86-minute film. Although not very suspenseful or frightening for a horror film, its unique metaphorical approach opens up a forum for discussion.