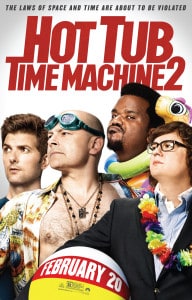 2010’s Hot Tub Time Machine was unquestionably immature, but there was also some measure of humanity behind the various humiliations. Hot Tub Time Machine 2 drops the heart and focuses below the belt with an uninspired string of dick jokes and adlibbed insults. Another thing absent this time around is the original’s most marketable performer, John Cusack, whose character only appears in a still photo and is said to be on a “spiritual journey.” The actor was likely on a journey to find a better script. He wouldn’t have to travel far.

Writer Josh Heald and director Steve Pink both return from the first film, but they don’t seem to have much affection for their premise or their characters. The primary concerns seem to be simply filling 90 minutes and coming in on budget in hopes of turning a profit.

Living large as CEO of “Lougle” – getting a jump on Google after the events of the first film – boisterous, unlikable Lou (Rob Corddry) is threatening his company and his life with drug-fueled antics. At a lavish party in his mansion, a guest shoots Lou (in the genitals), and buddies Nick (Craig Robinson) and Jacob (Clark Duke) drag him to the temporal displacement whirlpool in hopes of saving his life in the past. However, they wind up in a parallel universe in 2025, where Jacob is the rich one, Lou is an aged derelict, and Nick is recognized for a crappy dance tune. Convinced someone from this future traveled back in time to kill Lou, the gang searches for clues and eventually finds Adam Jr. (Adam Scott), the son of Cusack’s character. Junior eagerly puts his last-minute wedding plans on hold to tag along for no other reason than to fill out the foursome.

While admittedly meaningless in the grand scheme, the mystery plot is bothersome in its clunky introduction of red herrings and its use as a futile attempt to bring some semblance of structure where none exists. Scenes play out as if they’re the product of brainstorming sessions where no notes were taken and none of the screenplay ideas were put together into a final draft. 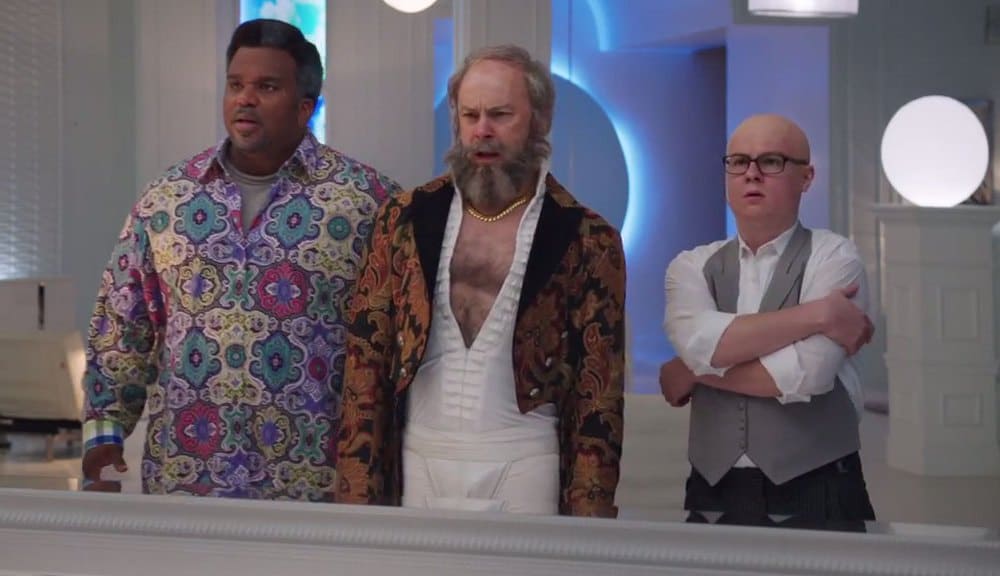 The guys rib each other for a while, and then move on to the next lame setup where they can do it all over again. They may get kicks out of harassing each other, but for us it’s excruciating. There’s nothing intrinsically wrong with unlikable characters – and certainly not in a juvenile comedy – but it’s a real chore to spend time with these pieces of work. Corrdry is the worst offender as Lou, his constant yelling and deplorable behavior grating instead of effectively goofy.

There’s some potential in the futureworld gimmickry, but none of is explored in an interesting way. A sleazy, brainless gameshow called “Choozy Doozy” (hosted by Christian Slater) shows how low the reality TV bar has fallen. The scene ends with an extended, painfully unfunny sequence in which two of the characters are forced to have a homosexual encounter in virtual reality. Adam Jr. is thrilled to meet tech genius Jacob, the inventor of his beloved self-pleasure gadget. A crazy future narcotic is introduced only to have a stock “tripping out” scene, and to include an emergency room visit where large needle is jammed into a poor guy’s – you probably guessed by now – testicles. Lou’s contentious relationship with a self-driving and self-aware Smart Car is only worth mentioning because the filmmakers go back to the stale bit time and time again.

Also curious is the incessant referencing of other time travel movies and pop culture in general, with no context other than the obvious surface conceit. The one effective allusion comes in a cameo from Chevy Chase, reprising his role as the hot tub maintenance guy, where a golf club and a famous line recall Caddyshack. Ultimately that reference, and all the others, only serve to remind us of some of the other, better things we could be watching instead of the slog that is Hot Tub Time Machine 2.