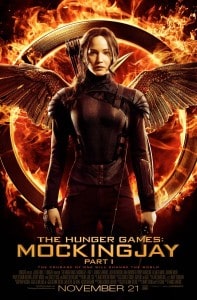 I must say I was underwhelmed by the latest chapter in The Hunger Games film saga, Mockingjay Part 1, which catches back up with Katniss Everdeen (Jennifer Lawrence) after a major event occurs in the narrative’s last installment, The Hunger Games: Catching Fire.

A fan of the books, I eagerly awaited all three movie versions and was flush with joy and relief upon seeing the visual treatment of the film adaptations for books one and two. Whereas my mind’s eye could imagine only so much of the eerie juxtaposition between the subjugated districts and the ruthless Capitol, the films stepped in (and stepped up) to satisfy. Seeing the bleak conditions of Katniss’ coal-covered world of District 12 next to the Capitol’s over-the-top, opulent monuments filled with its apathy-ridden, ridiculously dressed residents was just what this reader needed.

Yet in Mockingjay Part 1, the payoff was…well, missing. Sure, there’s some fan service – such as Katniss’ discovery that her sister’s evil cat somehow managed to survive a mini apocalypse, much to her dismay – and a few other winks and nudges to us fans, but this just didn’t feel like a complete film to me, regardless of the impending Mockingjay Part 2. I was left wanting more.

This latest installment introduces us to Boggs (Mahershala Ali) and Cressida (Natalie Dormer), two pivotal characters who help Katniss to embody her new role as the face of the rebellion, the Mockingjay. The symbol of the bird is essentially a propaganda campaign led conceptually by strategist Plutarch Heavensbee (played by the late Philip Seymour Hoffman, who died during filming). Hoffman is as good as ever (as is expected) and is still one of the characters you simply want to see more of on screen.

If you’re not simply dying to see the film – or don’t care to elbow your way through crowds of turkey-stuffed moviegoers on Thanksgiving Day – I say wait until Part 2 is released and see the pair together. This one can wait.