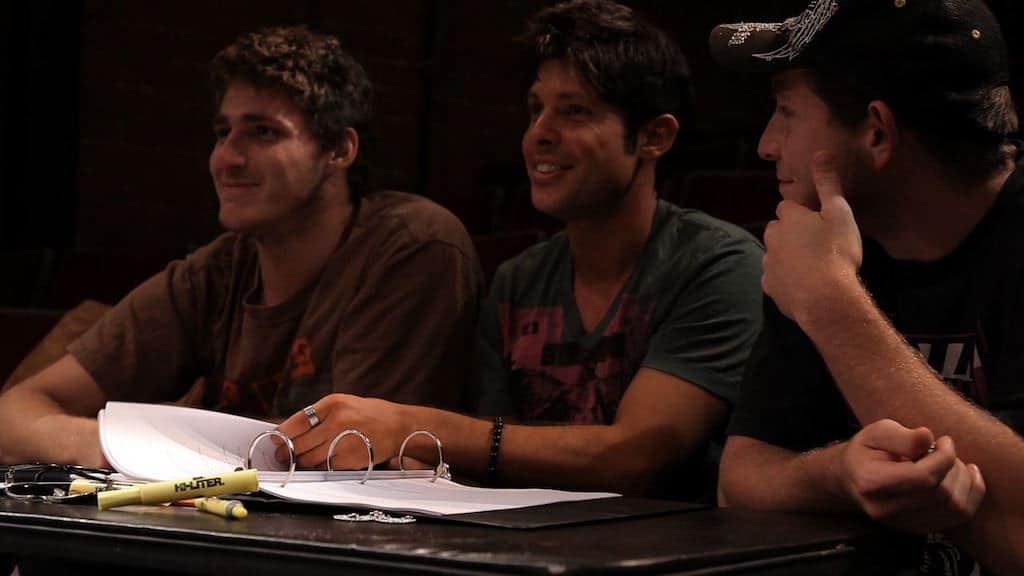 Earlier this week, we sat down with director Michael Leoni to talk about his documentary American Street Kid, currently playing in select cities. You can read our full review here, and for more info on the film including where it’s screening, check out its web site at americanstreetkid.com.

Initially this was going to be a short PSA on homeless youth. At what point did you decide that you’re going to make a feature length documentary?

We went out there and made a two-minute public service announcement and we were working with these kids, and then as we started getting information and starting to get to know the kids and the stories kept building. So I would say probably within a couple days, once the team started seeing that there was more than just information we were trying to get out. That’s when I knew there was more here, we have to get more in depth with the story in order for America to really understand what’s going on with these kids. I mean, we ended up releasing the PSA early on.

So you did release the PSA?

With documentaries I’m always curious as to how much footage was shot versus how much was used. It seems like you were going around shooting quite a bit. Did you have to shuffle through a lot of footage in the editing room to create the story you were looking for?

One-hundred percent. The eight kids that we feature, I could feature another eight. So there was so much footage and so many kids that I could really create a mini-series of this movie. And different levels of helping each of the kids. But I think the hardest thing is when you go out and you think this is your main character and you’re shooting this person, either they’re missing, or they end up dead, or they takeoff running away from the situation in Los Angeles. So it was really hard to decide how I was gonna feature the right amount of kids. But once you get all of the footage, you kinda start piecing things together, kinda knowing these are gonna be the ones I’m gonna focus on. But yeah I have so much footage, I could do an eight part mini-series.

So there were eight other kids?

Well, there were 300 kids I interviewed so I would say the kids I could actually do a story on would be eight or more, probably.

There is a point in the film, where you feel hopeless and you also lose focus on your play that is opening. Would you say that you were ever defeated or that you took a step back in your own personal life during shooting?

It became something that you can’t put down throughout the process. I was literally giving up everything that I worked for as a director and a writer because of the kids. I would say after I got Nick into transitional living and Greenz into these programs… once I really thought I’d find the answer and got into Emerald City, I really thought “Oh, okay, this is all I need to do,” and that’s when I got extremely defeated. Once I realized okay, the friendships are there, the family’s there, the programs are there, what’s missing now? Yeah, I would say that I was pretty defeated. But what’s challenging is, as I thought the movie was over, they would come back or something else would change. They were literally living in my house as I was editing a couple of the first cuts of the film. So it was this never ending thing *laughs*. 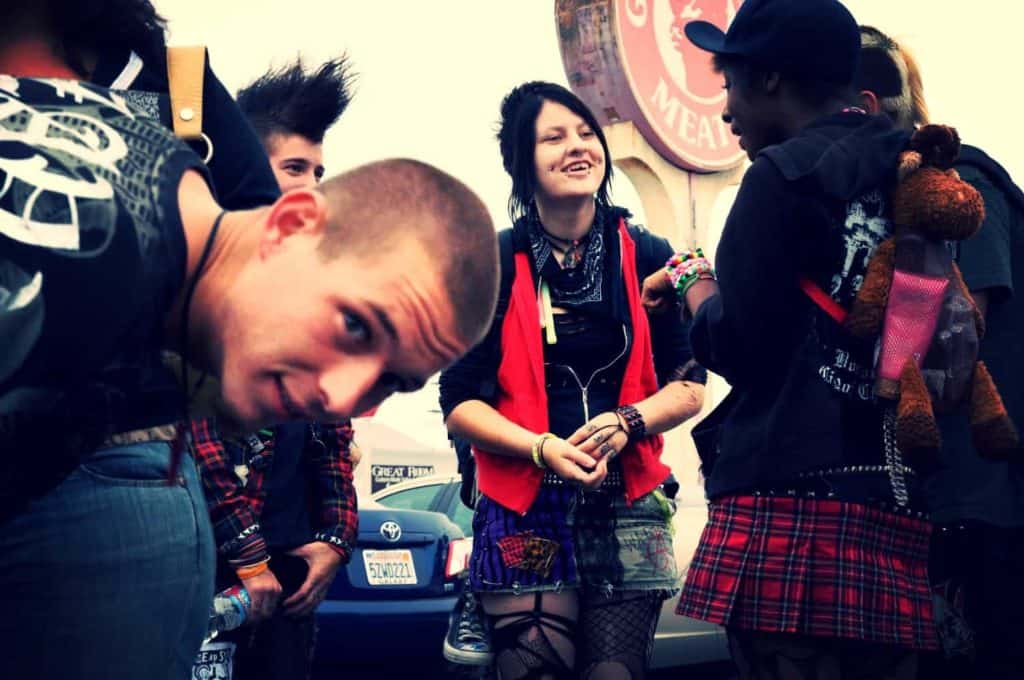 I think you made a very important point that these kids really want to feel like they are part of a family. Can you elaborate on that point?

It’s so funny. People who were homeless or are homeless who come to the film, who are recovered now, whether they’re in their fifties or their twenties, they all say the same thing. That’s what they all resonate with, which is the family. And I think that part of the hard thing about getting them off the streets is the connection they have to each other. Because, one of the heartbreaking moments, whether it’s captured on film or not, was when I got Bubbles into this youth program and her saying goodbye to all these friends, and her in the car on the way there. I mean, the depression, the sadness felt was from leaving these people who accepted them because they weren’t accepted their whole lives, there was no worth they had. So they create these bonds on the street. It’s like, you know, a kid is leaving for college and the mother is heartbroken about the kid leaving. It’s kinda like that. Because you don’t know if you’re ever going to see them again. When Bubbles was leaving, she was like, “Is Greenz gonna be okay? Is Ish going to be okay? Are they gonna die when I come back?” You know it’s just the way it is. So, I think that was the most heartbreaking moment of them, once they were getting off, is leaving them behind.

Would you say that the want to be part of a family helped them as well?

It helped them in an emotional way and how dangerous it is out there, so they have each other’s backs. You rarely see a kid alone. They’re always in groups. And that’s how they squat too, you know? How they find sleeping, is like, are you allowed in my squat? Yeah, I would say that’s the only thing that keeps them alive.

Did you ever come across someone who was alone that you interviewed?

*Long pause* No. Now that I’m really thinking about it. No. They have alone times. They squat alone sometimes. If I would catch them going into prostitution or something like that they’d be alone. They wouldn’t go together. Umm, no. They were pretty much always together.

The film left us on a hopeful, uplifting note with a couple of the kids making some real progress. Can you tell us what some of them are doing today?

Bubbles is in school. She will be finishing school. I think this is her last semester. She’ll be graduating from Washington. Greenz is getting married and he has a full-time job with his fiancee. They’ve been together for four years. Nick has a job and is raising his sister’s kid and his fiancee’s kid. So he’s like a family man right now raising all these kids. Ish is still working on his music. I think he’s up and down with battling drugs. Kiki is great. She’s doing spoken word all over the country, so she’s doing really well. She’s traveling and she has a book out and now she’s teaching kids at an outreach center. She’s performed for Hillary Clinton, she’s performed for the Hamilton cast, she’s performed for everybody, yeah. She was telling me the other day, she’s like, “Yeah, I did something for Angelina Jolie.” I’m like, “What?!” Oh, and Alicia Keys! 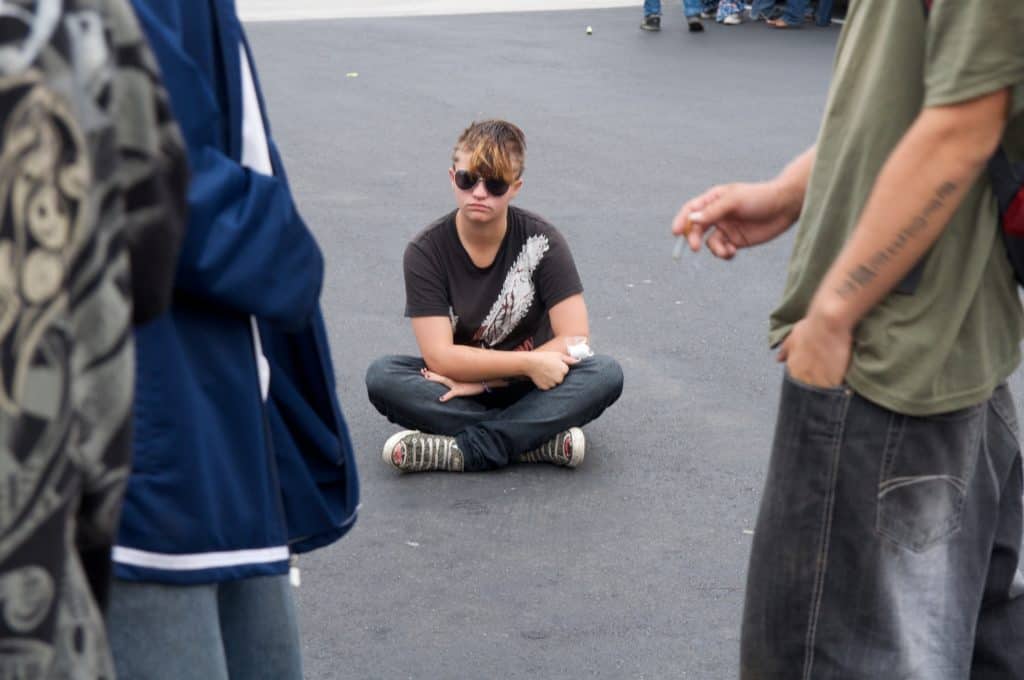 I saw her perform. She was amazing.

Yeah, she is amazing. I would say she could be the next Oprah if she really wants to be. Because she has a way of speaking. She’s all heart and soul. I think she would go really far.

Mischa is still missing. Crystal is okay. I don’t speak to her as much. She’s not on Facebook as much. That’s how they all reach out to me is Facebook or Instagram. Umm, two other kids we interviewed had passed away. One of them was killed. Another one died from some infection she couldn’t get fixed. You know, I talk to as many kids as I can through Facebook. Most of them are doing well. Some are still in the streets, but a lot of the parents have reached out to me throughout the years. So, I talk to a lot of parents and try to keep them updated as much as I can. I still talk to the majority of them. Ryan is in jail but he’s doing well. I mean he’s doing well emotionally, but he’s in jail. Actually what’s really cool about the prison he’s in, is that they’re training him to be a firefighter, so he’s fought the fires in Malibu. So he’ll come out with some skills which I think is really good.

Are there any other ways that you are still actively helping kids get off the streets?

So right now, the kids that I’m really focused on are the ones that have followed through mentoring programs- Kiki, Nick, Greenz, Bubbles. So right now, we’re linking up with other non-profits, this is an overwhelming issue, and Spare Some Change, the mentoring program, is now being developed in a way that can go into other non-profits, and kind of offer those services, like a big-brother, big-sister, or a sponsor like an AA program. And then putting all the pieces we’re working with; nurses, hypnotherapists, counselors, outreach counselors, therapists, and putting together this transformational living program. We feel like as many kids as we can help now, and send them to the right people that are, we feel, doing the right thing for kids. The goal is to create that mentoring program and all nonprofits, and also create that transformational living program, which is a 2-year program. It’s just so much work to get that done right. At first I was like, “I want it done now, I want it done now!” And I realized, in order to do it right. It takes the right amount of time and the right amount of people to make that a reality. That’s what we’re focusing on now.

Can you give me a general overview of what the transformational living program is?

Yeah! It’s a 2-year program. The first year focuses on the healing. All the needs. All the therapy they need, and different types of therapy. If some of the kids relate to more of a religious thing, we’ll focus on that. If they relate to more of a spiritual thing, we’ll focus on that, but also hypnotherapists, therapy. You know these kids were never told how to eat properly, how to brush their teeth, all these skills that they did not learn, so it’s like a year of focusing on their well-being and healing. It’s kind of a luxury rehab in a way. And the second year is focusing on job skills and really how they’re going to survive in the world.

A couple of your plays were mentioned in the film. Are you consistently active in theater?

Yeah, I just had a show that happened in July here and just closed last weekend and I think will be re-opening in March. Yeah, I’m always active in theater. This is the venue we took over (The 11:11 theater) so we could do the stuff that we want to do here. We’re always doing cutting edge theater, stuff like that. Art that makes a difference.

How does your experience with theater translate to working in film?

I like to blend the mediums. Like if someone were to come to one of my theater shows, they’re very cinematic and film-like. And this new movie I’m coming out with about teen suicide is very theatrical in a way. There’s like 8 minute monologues on camera which is controversial for a film. So, I like to kind of mix the mediums. To me it’s kind of the same thing. Visually, of course, you’re telling it in different ways. But I would say my film, When Today Ends, could translate very quickly to a play. And everyone is saying FAMOUS could be a movie. So I like to mix the mediums and show different styles and different ways of storytelling that could make it exciting and different and resonate with different people.