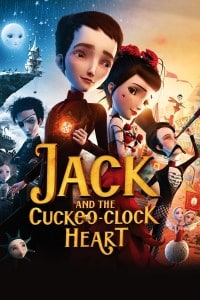 Before I go any further, let me say that this is not a typical animated film. If you’re in the market for a predictable romance with an adorable gimmick and Hollywood-esque ending, this film is not for you. And while animated, I can’t say I would recommend this film for children either. Several aspects were pretty horrifying in fact, and I found myself genuinely stunned by some of the more mature scenes.

Admittedly, I was not familiar with the book La Mécanique du cœur nor the album of the same name on which this film is based, but as a standalone piece, Jack and the Cuckoo-Clock Heart left quite a bit to be desired. While visually stunning and accompanied by a beautiful score, the movie’s payoff is, well, missing.

The story revolves around a boy who was born with a frozen heart and had it replaced with a cuckoo clock. To stay alive, he must follow a few simple (but utterly impossible) rules, including not getting too excited, too worked up or ever, ever, ever falling in love. Don’t get your hopes up here like me. This film is a classical tragedy, not the cookie-cutter Pixar-style film we’ve come to expect from this form of filmmaking.

The DVD/Blu-ray digital combo pack includes a behind-the-scenes featurette on the making of the film and profiles of each of the main characters. The subtitles on the disc were not working properly at first, so I ended up watching the film dubbed in English instead of its original French audio. I was, however, ultimately able to get them working after a restart of my Blu-ray player and watched the special features in subtitled French.

In all fairness, there may have been cultural references that I missed or concepts that were lost in translation. And, who knows, it’s possible I might’ve enjoyed the movie more as a short film.

Designed mostly in CG, the film does a respectable job giving life to its characters, and the music – particularly the opening song – is clever and catchy. I also don’t want to give too much away or ruin the ending in case this is type of story is your cup of tea.