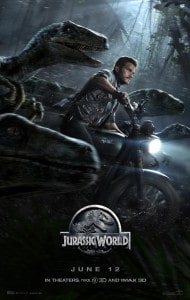 After 22 years and two middling sequels, we’ve finally gotten what feels like a natural successor to Steven Spielberg’s 1993 dino-centric classic. While Jurassic World doesn’t conjure the same magic as Jurassic Park, it taps into a lot of the same themes and appropriates several action beats. Oftentimes the reverence is detrimental, but there’s enough distinction and forward momentum in this adventure to make it one worth taking.

John Hammond’s dream of a dinosaur theme park has finally come to fruition on Isla Nublar. Looking like a mixture Magic Kingdom, SeaWorld, and Rainforest Café, Jurassic World hosts over 20,000 visitors daily. The well-oiled machine seems to be devoid of serious danger from the beasts on display, with buttoned-up operations manager Claire (Bryce Dallas Howard) making sure everything runs smoothly. Obsessed with the continued success of the park, Claire’s so focused she dumps visiting nephews Gray (Ty Simpkins) and Zach (Nick Robinson) with her assistant. Meanwhile, former Navy man Owen (Chris Pratt) is busy training raptors…for something. When Claire asks Owen to inspect the enclosure for the park’s newest attraction, the genetically engineered Indominus Rex, he’s skeptical. Of course, his fears are quickly confirmed when the animal escapes and begins stomping and chomping its way across the island and towards the tourists.

There’s a lot of plot to get through here – and that’s without mentioning a visit from the park’s billionaire owner Simon (Irrfan khan). Or Hoskins (Vincent D’Onofrio), leader of a group of InGen soldiers, and his plans to prove the viability of trained, militarized dinosaurs. Or the secret genetic formula used to create Indominus, devised by lead scientist Dr. Wu (B.D. Wong, reprising his role from the original). And the obligatory romantic past and future between Claire and Owen. 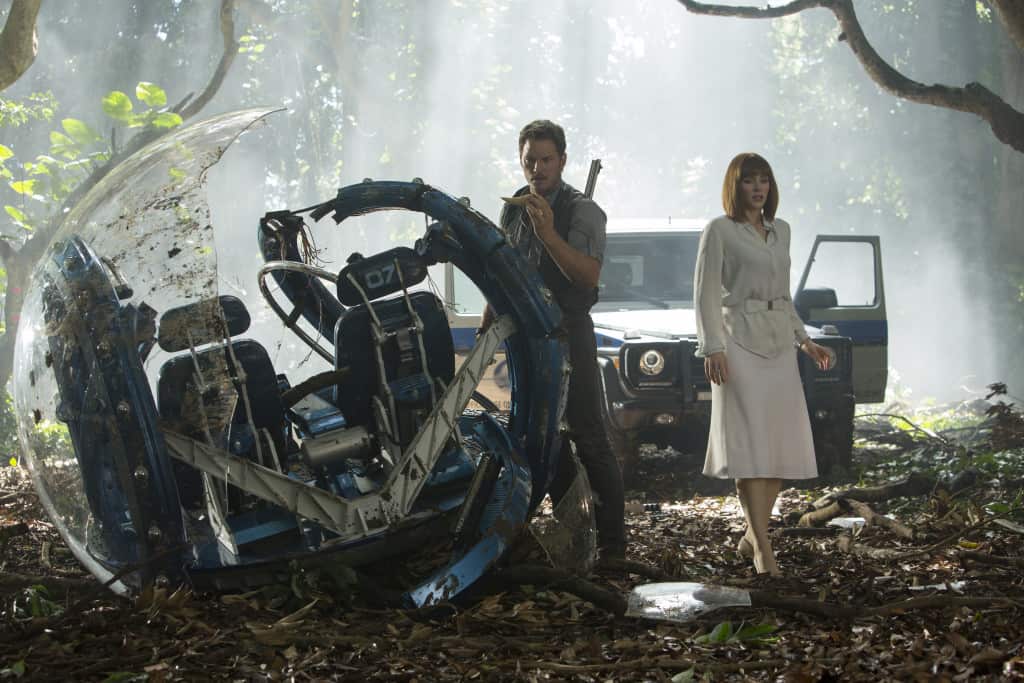 The first act gets a bit bogged down with the positioning of all the characters and establishing their importance in the big picture. Thankfully, director Colin Trevorrow deftly balances the exposition dump with engaging, detailed visuals that bring the park to life. There’s plenty new to look at – including an aquatic dinosaur and a petting zoo-type area for toddlers – and lots of detail in the island resort, from an IMAX theater to unique souvenirs and even a Margaritaville restaurant.

In many ways, Jurassic World embodies its subtext on an almost meta level. The movie uses marketing tie-ins just as much as any modern blockbuster, and also calls out the silliness of a dinosaur show being sponsored by Verizon – a jab and a plug all at once. In the world of the film, the public has grown tired of just seeing dinosaurs and needs something new and spectacular to be satisfied, an idea that could be extended to the movie-going audience as well. The shiny new CGI creations mingle with callbacks to the original – a cameo from a now rudimentary-looking Mr. DNA and a hologram of a memorable moment from Jurassic Park’s climax among them, playing into the bigger-is-better mentality.

There’s enough spectacle here to be appropriately wowed. As our main guides through the story, Howard and Pratt are mostly even-keel protagonists, not distracting from the computer-generated characters that are the real stars of movie. As the new attraction, Indominus Rex is appropriately awesome and terrifying as she destroys everything in her path. The climax involving the Rex, pterodactyls, the raptors, women and children in peril, and another (expected) familiar face, is thrilling. Though it takes place in darkness, as so many effects-laden mayhem set pieces do, the architecture of the action is always easy to follow, the combatants clearly defined and wonderfully rendered. The idea of trained, malleable raptors is without question goofy, though it provides the opportunity for some interesting twists that are also goofy, but in a fun way.

Jurassic World doesn’t approach the depths of science-run-amok ethos of Jurassic Park, with the screenplay by Trevorrow and three other credited writers packing in a lot of surface-level conflict, but the big action is great and definitely pushes the PG-13 rating constraint. There are even enough seeds planted to believe that more visits to this new, expanded cinematic world would be worthwhile.