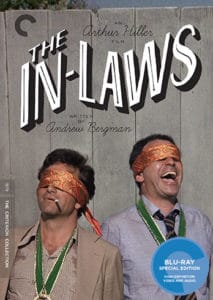 People looking and/or expecting a plethora of extra features from the Criterion Collection on their newest Blu-ray release of Arthur Hiller’s The In-Laws might be fairly disappointed; not only in terms of quantity but maybe even in terms of quality. Outside of the audio commentary and the accompanying booklet, the supplements are a bit sparse although many may be content with the simple fact that there exists a Blu-ray edition of The In-Laws.

Contentment can be had, taking solace in the film’s pristine 2k resolution restoration, all colors crisp and vibrant – which could be considered quite enough for some. Add to it the aforementioned commentary, an essay from comedy writer Stephen Winer and an excerpt from Arthur Hiller’s unpublished memoir (appearing for the first time in print) and you have yourself a solid offering.

The first interview happens to be with Alan Arkin (conducted this year), who by his account is essentially responsible for bringing the project to fruition (except for the script). After a brief history of his comedic background working in the improv group, Second City, and his earlier roles he goes on to discuss how he was able to break Falk out of his grousing and complaining; how he made Falk laugh for the first time in a film. Basically, it’s a shuffled deck half hours’ worth of compliments and humblebrags.

The second consists of the supporting actors. Ed Begley Jr., Nancy Dussault, James Hong and David Paymer all get their chance to regale us with their stories of working on the film and with Falk and Arkin. All four have nothing but fond memories about the experience, Dussault and Paymer in particular given that The In-Laws was their first film role (in Dussault’s case, her only film role). They provide some insight into the production and the importance of character actors but the 34 minute talking-head special does little in generating any excitement or interest, unfortunately. However, out of all of the Falk impression to be found on the Blu-ray Ed Begley Jr.’s has to be the best. 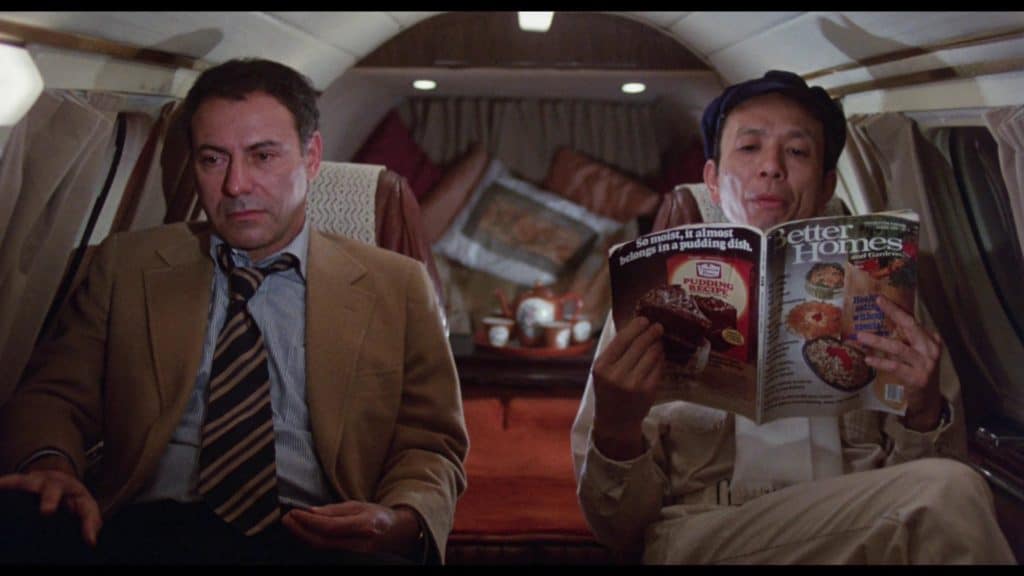 Both interviews shed some light on the film and what it was like for everyone involved but much of the conversation can be boiled down into a veritable love-fest, a game of compliment hot potato wherein Arkin’s hands are impervious to heat. It’s a fine film, a classic comedic offering from the ‘70s even, but those involved with the production might be embellishing just a smidge when it comes to the amazingness surrounding all of it, not Vince’s giant-tsetse-flies-carrying-children-off-to-certain-death embellishment but still. These interviews really seem tailored for those involved.

The audio commentary is obviously the most robust of the somewhat scant supplements with director Arthur Hiller, writer Andrew Bergman, and the film’s co-leads – Peter Falk and Arkin – discussing the film: its origins, certain scenes as well as some behind-the-scenes insights. They discuss everything while sharing stories about the shoot, tackling the big scenes – The Tsetse Fly story, Serpentine! and Libertini’s hand puppet – along with asides about the supporting cast.

All of it good stuff, but the standout in the four-man commentary talk would have to be Peter Falk. While everyone else is chatting about this scene and that line and this location, Falk can be heard at times cackling with laughter like he’s watching the film for the first time. There’s such excitement in his bombastic, gravelly voice and a genuine sense of wonder that adds an extra touch of cheerfulness to the already delightful madcap comedy when experiencing it with the audio commentary.

Even if you were to find the supplements lacking you still get a crisp transfer of a great comedy and a recording of Peter Falk laughing at said great comedy.