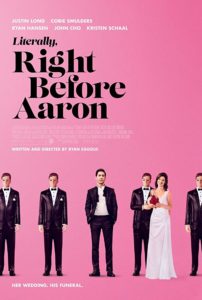 It does not surprise me to learn that Literally, Right Before Aaron is adapted from a short film. Here is a movie begging to be edited, boiled down to its essence, relieved from the languid cross it must bear running at feature length. There are many scenes that have no need to exist, along with supporting characters who seem ripped straight from a sketch comedy series – with only a handful of traits, none of them serving the story.

That the script has a few interesting observations to offer on its main character’s dilemma makes things all the more disappointing; this is an iteration of an idea that is a step in the wrong direction. Said dilemma is spelled out from the first scene, and the movie slows down from there.

Adam (Justin Long) gets a call from his ex-girlfriend, Allison (Cobie Smulders), and she says that she is getting married to her fiancé Aaron (Ryan Hansen). Allison invites him to the wedding. Adam accepts the offer but does so under the presupposition that this puts him on some kind of journey, a quest to win her back, even if it’s standing up and objecting at the assigned time during the ceremony itself. 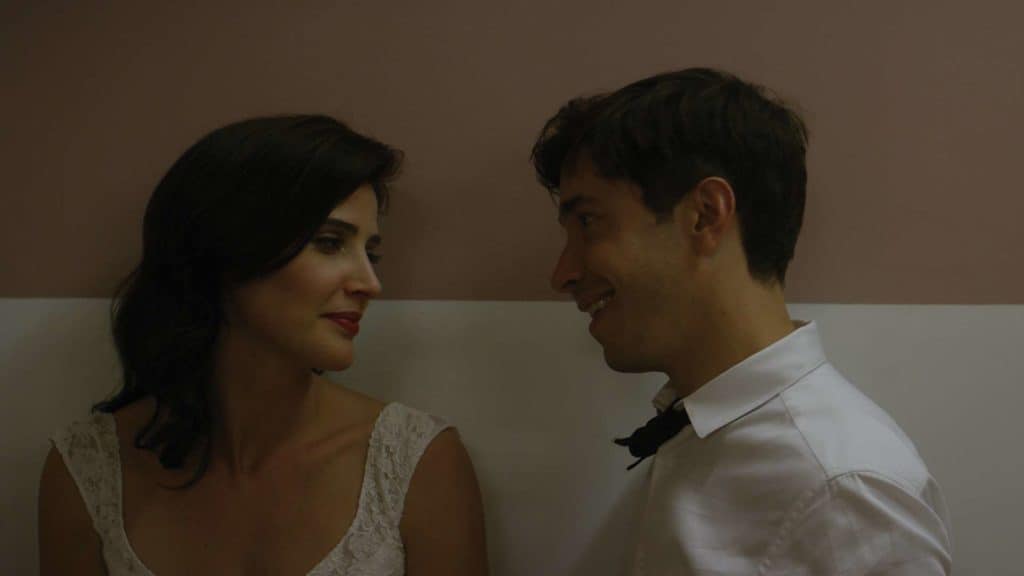 He has no game plan, no real reason why he believes that he’s entitled to her. In an early scene, we see him having dinner with his current girlfriend; in the course of five minutes, he proposes to her and then breaks up with her. He has some organizational problems.

This is what Literally, Right Before Aaron doesn’t quite understand. Adam is not a thoughtful person. He’s impulsive yet indecisive, selfish yet undefined. The presumption is that the film will allow him to go through this awkward situation and emerge with a better understanding of himself, other people and the world around him. But writer/director/editor Ryan Eggold has trouble getting there.

He never lets us believe that Adam moves very far from wherever he started. The script revs and revs for the whole runtime but never kicks into gear. When something works, it’s always an individual scene or a joke therein. We look and laugh, but soon that goes away. There’s a plot being threaded here, but it’s neglected. 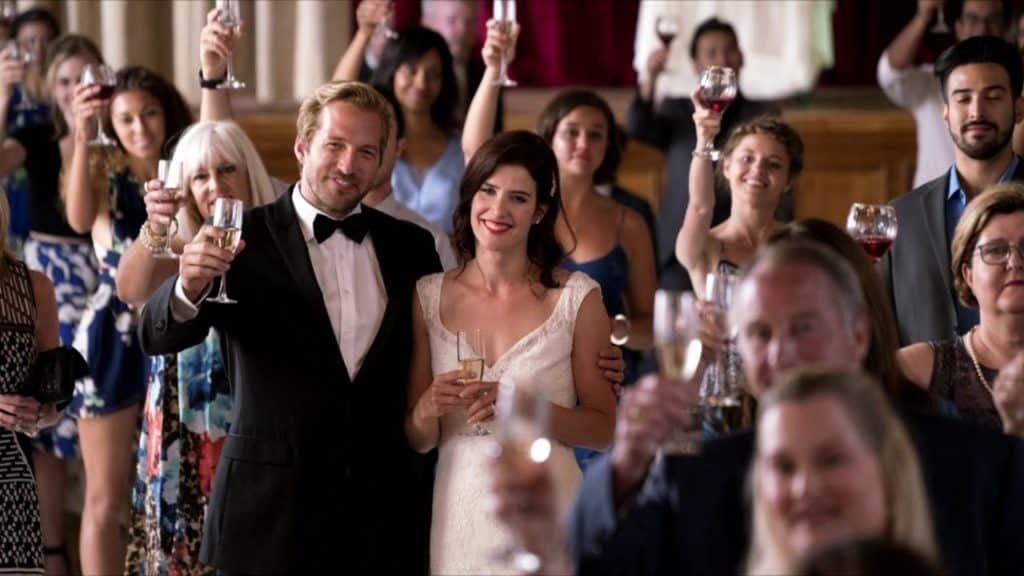 Consequently, there’s no momentum. One scene happens and then another and then another. Sooner or later, the movie ends. It feels like time has slowed down to accommodate it. Justin Long is a capable actor, who does admirable work at trying to realize Adam, and a ream of recognizable faces in the rest of the cast have their individual moments. But they can only operate in the moment, and Long’s performance is limited to a medium simmer.

The story doesn’t let him exist. If the point was not to let the character develop at all, then there’s a whole other problem that needs to be addressed, starting somewhere with the permissibility with which the movie fixates on the desires of this one man and never stops to think about the woman he’s still not over. The most punishing mood that it adapts for him is vaguely neutral.

But I don’t think that Literally, Right Before Aaron’s intentions are so malicious. It feels more misguided than anything else. We start off easy – a plot with a concept so purposefully uncomfortable that cringe comedy runs abound. I could live off that for 15 minutes or so. 20 would be pushing it. But then there’s this weird attempt to back things up but never peer in – to show flashbacks from Adam and Allison’s relationship. The film goes from a smooth, digital, scope finish to grainy, handheld Super 16. Washed away in memories, sullied by the sands of time.

There’s something going on there, yet Eggold only gives us the slightest taste. Perhaps within that concept we could find a better movie – one that traces their meet-cute, the seriousness of their life together (as is, it’s mentioned, never believed) and then wherever it all fell apart. The last scene could be Adam getting the call. Maybe we’d learn why he’s the way he is.