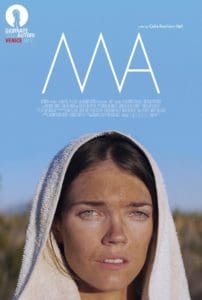 Movement reigns in the feature-length debut from writer/director Celia Rowlson-Hall; unsurprisingly, given her background in dance (most recently as a movement consultant on Anna Rose Holmer’s The Fits) which she utilizes to great effect within her modern reimagining of Mother Mary’s pilgrimage. There is an airy feel to the proceedings of Ma; a narrative which more so resembles a sequencing of transient creative impulses, both quick and chaotic, with lingering respites of meditative artistry detached from any standard, straightforward storytelling mode. Suggestive in nature yet with one clear imperative: movement is key.

Every gesture, every contortion, every increase and decrease in muscle movement is veiled with meaning and afforded far greater importance than any instance of audible communication (of which, there is essentially none). That meaning, however, can be indecipherable at times to the point of obscurity which allows, almost forces, the viewer to bestow their own meanings upon the action. It’s not every day that you witness a biblical story rendered modern through interpretive dance and pantomime, so the entire experience may be a bit perplexing (especially, if your knowledge of Mother Mary’s pilgrimage leans unfamiliar).

Rowlson-Hall purifies Ma into a distillation of unadulterated cinema by unifying those calculated movements with fascinating imagery, also shrouded in ambiguity and open to interpretation. Granted, not all movements nor images hold the same weight in terms of interest-piquing but Rowlson-Hall hits the high notes with a welcomed regularity over the course of the film’s 80-minute runtime. Peculiar happenings and striking locations, all positioned nicely within the frame (particularly, nice use of negative space), dot enough of a narrative that could be construed as lacking, at just the right pace; enough that even if and when the film unfortunately drags, it’s only a matter of time before something attention-grabbing transpires.

There are plenty of those instances to be had as well. Part of what makes Ma an exhilarating watch is the anticipation of seeing what Rowlson-Hall does next in terms of creativity; in particular, infusing her performative dance arrangements into the framework of narrative cinema. But she also exhibits an eye for transforming the ordinary into the extraordinary like the walls of a hotel room collapsing to reveal an alteration in the surroundings. Things are not always as they seem; hung paintings drain sand from inexplicable slits (as do wombs and taps), tailpipes birth vines of yarn along with a sky that will surrender a cathartic rain from its bullet wounds.

Obviously, one of the main reasons Ma works as well as it does stems from the talents of Celia Rowlson-Hall. Sure, Ian Bloom’s cinematography has the ability to maintain interest when the proceedings dip below the level of intrigue and editor Iva Radivojevic is able to manufacture some excitement through some jarring cuts that jolt through various time frames, but it is Rowlson-Hall’s capabilities as a writer, director, actor and choreographer and their realizations that render the film a compelling viewing experience.

Ma is a singular film; the likes of which could only be executed by Rowlson-Hall, herself, with a performance equal parts physicality and imagination that shifts between movements of high energy, graceful lyricism, and a quietude of solace. A performance that can fully signal the contents of channel-surfing through mere body motions and choreography that can transform a soldier’s stumbling, sluggishly tumbling up and down the height of a sand dune, into a poetic stretch of captivating cinema.

MA by Celia Rowlson-Hall from Factory 25 on Vimeo.