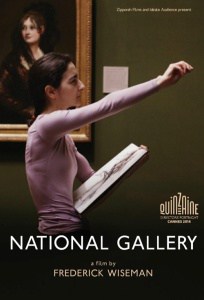 The viewer is granted unfettered access to the inner workings of one of the most prestigious art museums in the world: The National Gallery in London. An unprecedented glimpse behind the curtain, Wiseman gains access to a myriad of components that go into running and maintaining the museum’s 2,300 plus works of art. Historians and restorers, through their professional expertise and insight, shed light on a number of works including Rubens’s Samson and Delilah, J.M.W. Turner’s The Fighting Temeraire, Rembrandt’s Portrait of Frederick Rihel on Horseback, among so many others.

Expert documentarian Frederick Wiseman excellently conveys the power and importance of art in a seemingly effortless manner. Information is disseminated at every conceivable instance with Wiseman fixating his camera on any and all aspects and/or department within the National Gallery; be it through behind-the-scenes closed doors discussions or a multitude of craftsmen working on a variety of restorations, just about every possible viewpoint is represented in some context immersing the viewer in the various ins-and-outs of the legendary museum. This all-inclusive approach makes National Gallery one of the most comprehensive visual documents of any institution in cinema.

Even though National Gallery contains an abundance of behind-the-scenes footage it’s important to realize that at the center of all the scenes is the art. Whether it’s discussions revolving around bringing the art to a wider audience, budgeting for future exhibitions, restorations of said art or simply the visual frames of the hanging artwork itself – the art is the main focal point. The film is an immersive anthropological tableau vis-a-vis fly-on-the-wall voyeurism devoid of sit-down talking head interviews; even the employees showcased in National Gallery appear without their names attached just their deep reverence and appreciation of the artworks imbuing their sequences with contemplative compassion.

This viewpoint is brilliantly communicated through Wiseman’s deft handling of compiling and organizing the overflowing content that shapes National Gallery, molding this wealth of visual content into a quasi-exhibition (not unlike the Leonardo exhibition discussed within) exhibiting the footage in a rhythmic series of vignettes; at first, appearing rigid in its structure the film gradually melds melodic into a perfectly-curated mosaic of the logistical, the academic and the aesthetic.

The behind-the-scenes sequences of the private meetings and inner workings of the museum serve as contextual interludes segueing into the main attraction – the art – as the camera captures these magnificent works in the thoughtful stillness of static frames. These artwork interludes, mingled with the faces of the visiting public and their concentrated gazes, act as a punctuation mark to the preceding private sequences; an exclamation point, once again emphasizing the museum’s (and the film’s) main mission – the importance of art, their effect on culture and history and sharing these works with the public.