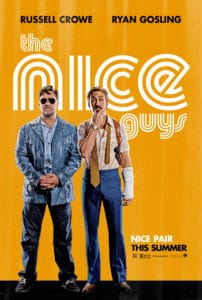 The Nice Guys is a supremely entertaining romp. Its middle gets just a tad saggy under the weight of plot, but the sharp writing and directing, coupled with two dynamic lead performances, make the somewhat protracted two hour run time a pleasurable ride. A silly, pulpy mix of Raymond Chandler and buddy cop movie, the play on L.A. noir doesn’t skimp on the sleaze, the violence, or the prickly wit, which makes for a fun, off-kilter concoction.

The muddle makes sense when considering the history of director and co-writer Shane Black (sharing screenplay credit with Anthony Bagarozzi), with The Nice Guys codifying the quirks of some his previous efforts. As a young prodigy screenwriter in the late ‘80s, his script for Lethal Weapon basically set the blueprint for that era’s mismatched buddy cop movie, while The Last Boy Scout took that template to glorious extremes a few years later. Black’s great directorial debut, Kiss Kiss Bang Bang, established a noir-ish vibe and 2013’s Iron Man 3 was a welcomed oddity in MCU machine of sameness and showed off some action chops. That his voice came through clearly in a Marvel movie is a bit of a miracle.

For The Nice Guys, Black heads back to his beloved setting of Los Angeles (though the movie was actually primarily shot in Atlanta). It’s 1977 and adult film star Misty Mountains is killed in a mysterious car crash. Private detective Holland March (Ryan Gosling) becomes involved when the porn star’s aunt swears she saw Misty alive after the accident. In a separate case (but in this type of movie is anything unconnected?), March is searching for Amelia (Margaret Qualley), a young woman who desperately doesn’t want to be found. She hires enforcer Jackson Healy (Russell Crowe) to scare off March, who’s been following her. 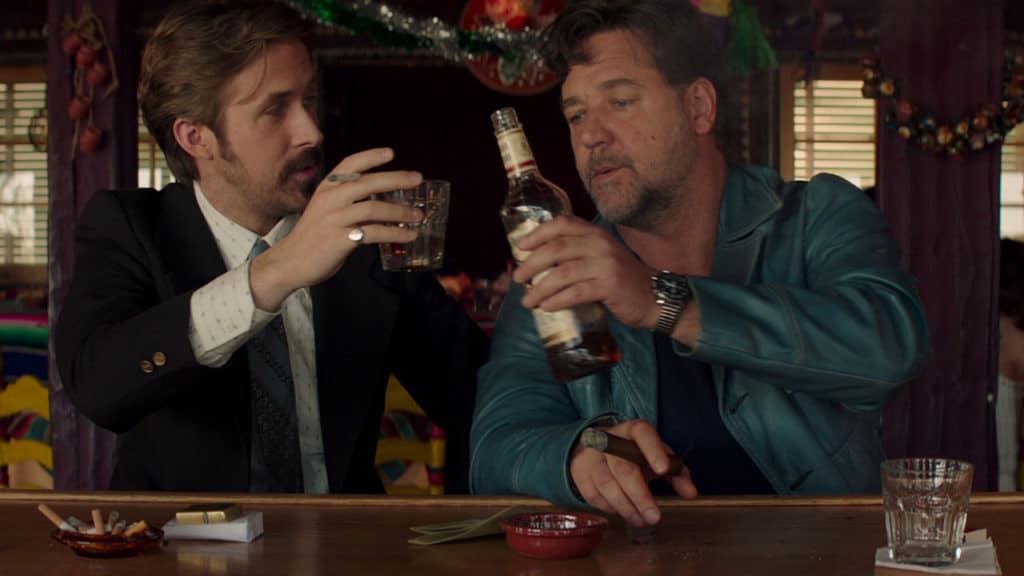 It’s the typical twisty potboiler that’s a mouthful to explain, though it makes perfect sense at it unfolds. The real joy is watching Gosling and Crowe interact with each other and the sordid characters they come into contact with in this very ‘70s setting. Of course, the title is ironic in that the protagonists are far from nice guys. As muscle for hire, Healy’s primary concern after hearing the story of a clearly shaken Amelia is that her payment is $7 short of his fee. March has no problem stringing out clients so he can up his take for a job, and he’s also a drunk who has his tween daughter Holly (a very good Angourie Rice) drive him around after he’s had a few too many. Holly also gets involved in the case and seems to be just as good at detecting as her father.

Healy and March are definitely better than the heavies involved in the nefarious plot, however, and it’s easy to root for them as the barbs and bullets fly. Their vibrant exchanges are frequently hilarious and the in-over-their-heads nature of the case leads to some great moments showcasing cowardice and ineptitude. Gosling proves to be a wonderful physical comedian, while also great at giving a high-pitched squeal of fright, and Crowe’s good-natured brute is delightfully instinctive. Black has his anti-protagonists react to certain tense situations in unexpected ways, which dovetails with his frequent playing of genre expectations. The dropped gun trope ends inventively, and falls off of balconies may not end as you presume. Remember Lethal Weapon 2? This is not that.

Though the action is occasionally brutal – there’s plenty of blood and collateral damage to the proceedings, the snappy script and the greatness of the two leads make The Nice Guys a riot.