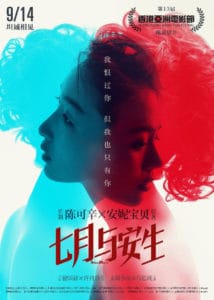 Derek Tsang’s Soul Mate is an interesting, if never fully compelling, romantic drama about the love and friendship shared by Ansheng (Zhou Dongyu) and Qiyue (Sandra Ma), two Chinese women who meet at age 13 and grow up, apart and back together. Opening on a scene of Ansheng meeting Qiyue’s former fiancé on a Shanghai subway, the film returns to the girls’ first meeting in an extended flashback.

The child actresses are well cast in terms of matching the personalities and quirks of their older counterparts. Unfortunately, the direction doesn’t do the film any favors here, with the too-cute tone hurting the mystery setup in the prior subway scene.

Fortunately, once the lead actresses take over for the characters’ late teenage years, the wistful tone returns to the fore. The two women strike the mix between showing deep friendship and revealing the fault lines under that friendship to set up the dramatic stakes for the finale. Qiyue starts dating Jiaming (Toby Lee), sparking a conflict that ends in Ansheng leaving to travel China as a vagabond with rock bands and photographers. Ansheng, living sadly as a free spirit, is contrasted against Qiyue feeling smothered by her life at home.

Some of the emotional moments in the middle of the film are hamstrung by an unwillingness to let shots linger on discomfort and pain. The film struggles in those moments to maintain emotional poignancy because it has too much plot to get through, slipping into montage or showing constructed versions of events instead of letting the characters just be on screen together. Luckily, Tsang handles the ending more deftly, sitting in the pain of the characters to provoke tears without being totally manipulative.

The film could have been shorter and constructed in a clearer fashion, but on the strength of Dongyu and Ma, it holds together well enough for a recommendation.