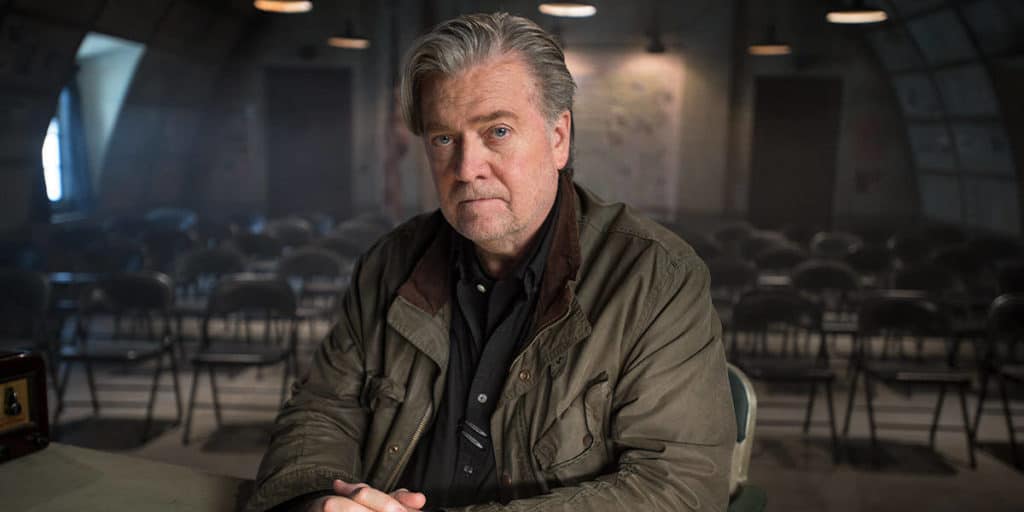 The Spotlight on Documentary section of this year’s New York Film Festival has been announced, with 14 films including 3 world premieres.Highlighting this lineup is Errol Morris‘ latest, American Dharma, which looks at Steve Bannon, promising “an unflinching film, and a deeply disturbing experience.”

The 56th New York Film Festival will be taking place September 28 – October 14, stay tuned for more coverage and for more information head over to their website here.

American Dharma
Dir. Errol Morris, USA/UK, 2018, 100m
U.S. Premiere
Errol Morris’s productively unnerving new film is an encounter with none other than Steve Bannon—former Goldman Sachs partner and movie executive, self-proclaimed “populist” warrior, and long-time cinephile. Morris faces off with his subject in a Quonset hut set modeled on a Bannon favorite, Twelve O’Clock High, and questions him about the most disturbing and divisive milestones in his career as a media-savvy libertarian/anarchist/activist, from Breitbart News’ takedown of Anthony Weiner to Bannon’s incendiary alliance with our current president to the tragic milestone of Charlottesville. American Dharma is an unflinching film, and a deeply disturbing experience. To quote William Carlos Williams, “The pure products of America go crazy…”

Angels Are Made of Light
Dir. James Longley, USA/Denmark/Norway, 2018, 117m
In the new film from James Longley (Iraq in Fragments), made over a period of several years, school children grow up before our eyes into young adults in the shattered city of Kabul in the country of Afghanistan. Longley meticulously constructs a framework—at once humanist, historical and poetic—for the trajectories of his young subjects and the adults doing their best to nurture them and prepare them for an unstable and unpredictable future. Angels Are Made of Light is a film of wonders great and small, some terrifying and some deeply moving, made by a truly ethical and attentive artist.

Carmine Street Guitars
Dir. Ron Mann, Canada, 2018, 80m
U.S. Premiere
The vibe is always deep and the groove is always sweet in Ron Mann’s lovely portrait of a week in the life of luthier Rick Kelly’s eponymous ground floor shop. Here, with help from his 93-year-old mother (and bookkeeper) and young apprentice Cindy Hulej, Kelly builds new guitars out of “the bones of old New York,” i.e. timber discarded from storied spots like the Hotel Chelsea and McSorley’s. A few regular customers—including Lenny Kaye, Bill Frisell, Charlie Sexton, Marc Ribot, and the film’s “instigator,” Jim Jarmusch—drop in along the way for repairs or test runs of Rick’s newest models. Or just to hang out and be with the music.

Preceded by:
Dream of a City
Dir. Manfred Kirchheimer, USA, 2018, 39m
World Premiere
The 87-year old Manny Kirchheimer, a filmmaker’s filmmaker, has spent decades quietly documenting the life of our city, where he has resided since fleeing Nazi Germany with his family in 1936. Kirchheimer’s films can be placed in the proud tradition of New York–based “impressionistic” nonfiction films like Jay Leyda’s A Bronx Morning and D.A. Pennebaker’s Daybreak Express, but they have a meditative power, tending to the surreal, that is absolutely unique. This astonishing new film, comprised of stunning black and white 16mm images of construction sites and street life and harbor traffic shot by Kirchheimer and his old friend Walter Hess from 1958 to 1960, and set to Shostakovich and Debussy, is like a precious, wayward signal received 60 years after transmission. A Grasshopper Film / Cinema Conservancy Release.

The Cold Blue
Dir. Erik Nelson, USA, 2018, 73m
Erik Nelson’s new film is built primarily from color 16mm images shot in the spring of 1943 by director William Wyler and his crew on 8th Air Force bombing raids over Germany and strategic locations in occupied France. Wyler shot over 15 hours of footage on a series of raids with the 91st bomber group, from which he crafted his 1943 film The Memphis Belle. From the remaining raw footage, Nelson has crafted an experience of a different kind, filtered through the spoken recollections of nine veterans, among the last survivors of the War in Europe.

Divide and Conquer: The Story of Roger Ailes
Dir. Alexis Bloom, USA, 2018, 107m
This is the epic tale of Roger Ailes, the hemophiliac boy from Warren, Ohio, who worked his way up from television production, to the Nixon White House, to George H.W. Bush’s successful 1988 presidential campaign, to the stewardship of Rupert Murdoch’s Fox News, which he built into a full-fledged right-wing propaganda machine disguised as a news organization that played a starring role in the 2016 presidential election. In the bargain, Ailes and his cohorts created a host environment for an exceptionally pure strain of power-wielding misogyny that proved to be his undoing. Director Alexis Bloom goes about her task methodically, establishes her facts scrupulously, and finishes things off with an appropriately ironic edge. An A&E IndieFilms release.

End of Life
Dir. John Bruce & Paweł Wojtasik, USA/Greece, 2017, 91m
U.S. Premiere
John Bruce and Paweł Wojtasik’s radiant film takes a respectful and serenely composed look at the very activity, the actual work, of dying for five individuals: Sarah Grossman, the spiritual teacher Ram Dass, Carol Verostek, Doris Johnson, and the artist, writer, and performer Matt Freedman. This is not a film of rhetoric but of concentrated and sustained attention to an area of experience at which we all arrive but from which the living flinch. Bruce and Wojtasik are tuned to a very special and extraordinarily delicate wavelength as artists, and they create a rare form from the silences, the incantatory repetitions, the mysterious repeated gestures, and the communions with the mystery of being enacted by the dying. A Grasshopper Film release.

Fire Music
Dir. Tom Surgal, USA, 2018, 90m
World Premiere
Tom Surgal’s film looks at the astonishing sounds (and sights) of that combustible and wildly diverse moment in music known as free jazz, which more or less began with Ornette Coleman, whose tone clusters and abandonment of strict rhythms opened the floor from under modern jazz. Surgal pays close attention to the Art Ensemble of Chicago, Albert Ayler, Eric Dolphy, Sam Rivers, Sun Ra & His Arkestra, and, of course, the recently deceased piano genius Cecil Taylor. Filled with priceless archival footage and photographs, Fire Music is a fittingly wild and freeform tribute to music that makes your hair stand on end.

Maria by Callas
Dir. Tom Volf, USA, 2018, 113m
The legendary soprano Maria Callas—American-born, ethnically Greek, and a true citizen of the world—was one of the supreme artists and cultural stars of the mid-20th century, and she became almost synonymous with the art form to which she devoted her life—Leonard Bernstein once called Callas “the Bible of opera.” Tom Volf’s film, comprised of archival photographs, newsreels, interviews, precious performance footage, and selections from her diary, takes us through Callas’s life: from her childhood, early training, and rise to stardom, through her tumultuous public life and vocal decline, and to her death from a heart attack at the age of 53. This is a cinematic love note to a great artist, and a vivid audiovisual document of mid-century western culture. A Sony Pictures Classics release.

The Memphis Belle: A Story of a Flying Fortress
Dir. William Wyler, USA, 1944, 45m
In February of 1943, Major William Wyler went up in a B-17, 16mm camera in hand, on his first combat mission over Bremen with the Ninety-First Bomber Group. On this and the missions that followed, the Hollywood master, then at the height of his career, braved freezing and perilous conditions to get the images he needed, saw his sound man perish on a return trip from a raid over Brest, and refused an order to stop flying combat missions issued by his superiors, worried that he would be taken prisoner in Germany and identified as the Jewish director of Mrs. Miniver. The final result was Memphis Belle, one of the greatest of the WWII combat documentaries, and it has now been meticulously and painstakingly restored.

The Times of Bill Cunningham
Dir. Mark Bozek, USA, 2018, 71m
World Premiere
Mark Bozek began work on this lovely and invigorating film about the now legendary street photographer on the day of Cunningham’s death in 2016 at the age of 87. Bozek is working with precious material, including a lengthy 1994 filmed interview with Cunningham (shot when he received a Media Award from the Council of Fashion Designers of America) and his subject’s earliest pre-New York Times photographs, long unseen. In his customarily cheerful and plainspoken manner, Cunningham takes us through his Irish Catholic upbringing in Boston, his army stint, his move to New York in 1948 (which was controversial for his straitlaced family), his days as a milliner, his close friendships with Nona Park and Sophie Shonnard of Chez Ninon, his beginnings as a photographer, and his liberated and wholly democratic view of fashion. Narrated by Sarah Jessica Parker.

The Waldheim Waltz / Waldheims Walzer
Dir. Ruth Beckermann, Austria, 2018, 93m
Kurt Waldheim was an Austrian diplomat and politician who served as Secretary-General of the United Nations from 1972 to 1982. In 1986, his nation elected him as president despite a controversy over his previously undisclosed role in the Nazi regime during World War II. Using archival footage, Ruth Beckermann (The Dreamed Ones, Art of the Real 2016) studies how various media reported Waldheim’s accession and, more broadly, the influence of false naïveté and political pressure by those in positions of power. The Waldheim Waltz is an intelligent, timely work of activist filmmaking—one whose questions about collective complicity, memory, and historical responsibility are as important to ask today as they were more than 30 years ago. A Menemsha Films release.

Watergate
Dir. Charles Ferguson, USA, 2018, 240m
Charles Ferguson reopens the case of Watergate, from the 1972 break-in to Nixon’s 1974 resignation and beyond, and gives it a new and bracing life. The filmmaker creates a real-life political suspense story, one remarkable detail at a time, built from archival footage; interviews with surviving members of the Nixon White House (including Pat Buchanan and John Dean), reporters (Lesley Stahl, Dan Rather and, of course, Bob Woodward and Carl Bernstein), special prosecutors (Richard Ben-Veniste, Jill Wine-Banks); the Senate Watergate Committee (Lowell Weicker), members of the House Judiciary Committee who debated Nixon’s impeachment (Elizabeth Holtzman), modern commentators, and historians; and carefully executed recreations based on the Oval Office recordings. Ferguson also accomplishes the difficult and immediately relevant task of drawing extremely disquieting fact-based parallels with another presidency and criminal investigation, still underway. An A&E release.

What You Gonna Do When the World’s on Fire?
Dir. Roberto Minervini, Italy/USA/France, 2018, 123m
U.S. Premiere
Italian-born, American South–based filmmaker Roberto Minervini’s follow-up to his Texas Trilogy is a portrait of African-Americans in New Orleans struggling to maintain their unique cultural identity and to find social justice. Shot in very sharp black and white, the film is focused on Judy, trying to keep her family afloat and save her bar before it’s snapped up by speculators; Ronoldo and Titus, two brothers growing up surrounded by violence and with a father in jail; Kevin, trying to keep the glorious local traditions of the Mardi Gras Indians alive; and the local Black Panthers, trying to stand up against a new, deadly wave of racism. This is a passionately urgent and strangely lyrical film experience.